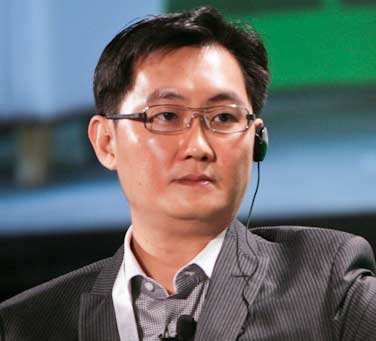 Ma Huateng (Chinese: 马化腾; pinyin: Mǎ Huàténg, born on October 29, 1971), also known as Pony Ma, is a Chinese business magnate, investor, politician, and member of the chinese communist party. He is the founder, chairman and chief executive officer of Tencent, Asia’s most valuable company, one of the largest Internet and technology companies, and the biggest investment, gaming and entertainment conglomerates in the world. The company controls China’s biggest mobile instant messaging service and its subsidiaries provide media, entertainment, payment systems, smartphones, internet-related services, value-added services and online advertising services, both in China and globally.

In 2007, 2014, and 2018, Time magazine called him one of the world’s most influential people, while in 2015, Forbes credited him as one of the world’s most powerful people. In 2017, Fortune ranked him as among the top businessmen of the year. In 2018, he was named one of the “Most Powerful People In The World” by the CEOWORLD magazine. Ma is a deputy to the Shenzhen Municipal People’s Congress and is a delegate in the 12th National People’s Congress.

Being one of “Fortune world’s greatest leaders”, Ma is known for his low profile personality as compared to fellow Chinese businessman Jack Ma’s outgoing personality. Ma has been closely compared to American investor Warren Buffett for their similar investment philosophies, and often described as an “aggressive acquisitor”.

As of July 2020, he is China’s richest man, with a net worth of US$59.9 billion according to Forbes. On 21 November 2017, his estimated net worth briefly surpassed that of Larry Page and Sergey Brin (individually) ranking him the ninth richest man in the world at the time, and the first citizen from the People’s Republic of China to enter Forbes’ top 10 richest men list. The personal net worths of both Larry Page and Sergey Brin have since eclipsed that of Huateng again.

Ma was born in Chaoyang District, Shantou, Guangdong. When his father, Ma Chenshu (马陈术), got a job as a port manager in Shenzhen, the young Ma accompanied him. He was enrolled in Shenzhen University in 1989 and then graduated in 1993 with a Bachelor of Science in computer science.

Founding of Tencent and early career

Ma’s first job was with China Motion Telecom Development, a supplier of telecommunications services and products, where he was in charge of developing software for pagers. He reportedly earned $176 per month. He also worked for Shenzhen Runxun Communications Co. Ltd. in the research and development department for Internet calling services.

Along with four other classmates, Ma Huateng went on to co-found Tencent in 1998. The company’s first product came after Ma participated in a presentation for ICQ, the world’s first Internet instant messaging service, founded in 1996 by an Israeli company. Inspired by the idea, Ma and his team launched in February 1999 a similar software, with a Chinese interface and a slightly different name – OICQ (or, Open ICQ). The product quickly became popular and garnered more than a million registered users by the end of 1999, making it one of the largest such services in China.

Talking about the founding of Tencent, he told China Daily in a 2009 interview that “If I have seen further, it is by standing on the shoulders of giants,” paraphrasing a quote attributed to Isaac Newton and referencing the similarities between ICQ and OICQ. “We knew our product had a future, but at that time we just couldn’t afford it,” Ma remembered. In order to solve the problem, Ma asked for bank loans and even talked about selling the company.

Since Tencent’s prized service OICQ was offered free of charge, the company looked to venture capitalists to finance its growing operational costs. In 2000, Ma turned to US investment firm IDC and Hong Kong’s telecom carrier Pacific Century CyberWorks (PCCW) who bought 40 percent of Tencent’s shares for $2.2 million. With the pager market declining, Ma improved the messaging platform by allowing QQ users to send messages to mobile handsets. Afterwards, 80 percent of the company’s revenue came from deals struck with telecom operators who agreed to share message fees.

After AOL (America Online) bought ICQ in 1998, the company filed an arbitration against Tencent with the National Arbitration Forum in the United States, claiming that OICQ’s domain names OICQ.com and OICQ.net were in violation of ICQ’s trademark. Tencent lost the case and had to relinquish the domain names. In December 2000, Ma changed the name of the software to QQ (with “Q” and “QQ” used to stand for the word “cute”).

After the AOL case, Ma decided to expand the business portfolio of Tencent. In 2003, Tencent released its own portal (QQ.com) and made forays into the online games market. By 2004, Tencent became the largest Chinese instant messaging service (holding 74 percent of the market), prompting Ma to list the company on the Hong Kong Stock Exchange. After the company raised $200 million in June’s IPO, Ma quickly became one of the richest people in China’s telecom industry.

In 2004, Tencent launched an online gaming platform and started selling virtual goods to support the games published on that platform (weapons, gaming power), as well as emoticons and ringtones.

Mimicking Microsoft, Ma created two competing teams of engineers in 2010 and charged them with creating a new product. After two months, one team presented an app for text messaging and group chat – WeChat – which launched in January 2011. As of 2015, WeChat (or Weixin in Chinese), is the largest instant messaging platform in the world, used by 48 percent of Internet users in the Asia-Pacific region.

Other diverse services provided by Tencent include web portals, e-commerce, and multiplayer online games. Online games such as Legend of Yulong and Legend of Xuanyuan boosted revenue by more than half, up to US$ 5.1 billion, with a US$ 1.5 billion profit margin.

In December 2015, Ma announced that Tencent would build an “internet hospital” set up in Wuzhen that will provide long-distance diagnoses and medicine delivery.

Ma uses the nickname Pony, derived from the English translation of his family name, which means “horse.” Ma Huateng seldom appears in the media and is known for his secretive lifestyle. He believes in the maxim: “Ideas are not important in China – execution is.”

Ma Huateng’s wealth comes from the 9.7 percent stake in Tencent Holdings. He reportedly owns property in Hong Kong and art pieces worth $150 million. He owns a redeveloped palatial residence of 19,600 sq ft in Hong Kong.

In 2016, Ma transferred $2 billion worth of Tencent shares to his charitable foundation. However Forbes has not decreased his net worth as the shares are still listed under his name.