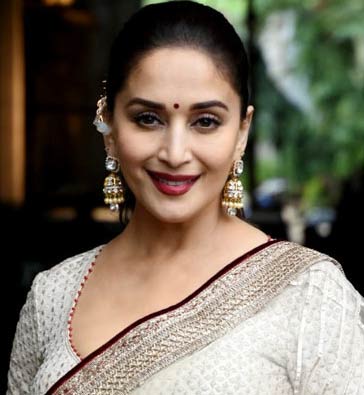 Madhuri Dixit Nene (pronounced [madʱ:uri d̪iːkʃɪt̪]; born 15 May 1967) is an Indian actress, producer, and television personality. One of the most popular actresses of Hindi cinema, she has appeared in over 70 Bollywood films. The recipient of such accolades as six Filmfare Awards, she was one of the country’s highest-paid actresses in the 1990s and early 2000s, and has featured seven times on Forbes India’s Celebrity 100 list. In 2008, the Government of India awarded her with Padma Shri, the fourth highest civilian honour of the country.

Born and raised in Bombay, Dixit initially aspired to study microbiology, but discontinued her studies when she received offers for film roles and made her acting debut in 1984 with a leading role in the drama Abodh. After a few commercially failed films, she had her breakthrough with the action romance Tezaab (1988) and established herself with starring roles in the top-grossing romantic dramas Dil (1990), Beta (1992), Hum Aapke Hain Koun..! (1994), and Dil To Pagal Hai (1997). She won four Best Actress awards at the Filmfare Awards for her performances in them. Her other commercially successful films during this period include Ram Lakhan (1989), Tridev (1989), Thanedaar (1990), Kishen Kanhaiya (1990), Saajan (1991), Khalnayak (1993), and Raja (1995).

Dixit also earned praise for her dramatic performances in the crime film Parinda (1989), the romantic dramas Prem Pratigyaa (1989) and Devdas (2002), receiving the Filmfare Award for Best Supporting Actress for the latter, the thrillers Anjaam (1994) and Pukar (2000), and the social dramas Mrityudand (1997) and Lajja (2001). Following a sabbatical from acting in 2002, Dixit starred in the musical Aaja Nachle (2007), and worked intermittently in the next decade, gaining appreciation for her starring roles in the black comedy Dedh Ishqiya (2014) and the Marathi comedy drama Bucket List (2018). Her highest-grossing release came with the adventure comedy Total Dhamaal (2019).

In addition to acting in films, Dixit has been engaged in philanthropic activities. She has worked with UNICEF since 2014 to advocate the rights of children and prevent child labour, and is a prominent celebrity endorser for brands and products. She participates in concert tours and stage shows, features frequently as a talent judge for dance reality shows, has launched an online dance academy and is the co-founder of the production company RnM Moving Pictures. Dixit has been married to Shriram Nene since 1999, with whom she has two children.

Madhuri Dixit was born on 15 May 1967 into a Marathi Kokanastha Brahmin family in Bombay (present-day Mumbai) to Shankar and Snehlata Dixit. She has two elder sisters and an elder brother. She kindled an interest in dance at an early age of three, and went on to train in Kathak for eight years; later on becoming a professionally trained Kathak dancer.

I received a scholarship as a Kathak dancer when I was nine. I even remember that it was due to a dance performance that the first time my name had appeared in the paper. I was seven or eight years old at that time and had performed at the Guru Purnima festival. And there was a journalist who was there and he had written this article saying that ‘this little girl stole the show’ – something like that. I was over the moon. So dance gave me a sense of achievement. Of worth.”

Dixit received her education at Divine Child High School in Andheri. Apart from her studies, she participated in extra-curricular activities, such as dramatics. Aspiring to become a microbiologist, Dixit enrolled at the Sathaye college in Vile Parle (Mumbai) where she studied microbiology as one of her subjects in BSc. However, six months after she had commenced her course, Dixit decided to discontinue studies and pursue a full-time career in films.

Dixit with her husband Shriram Nene in 2012

Following widespread media speculation over years on her personal life, Dixit married Shriram Madhav Nene, a cardiovascular surgeon from Los Angeles, California on 17 October 1999, in a traditional ceremony held at the residence of Dixit’s elder brother in Southern California. Nene had never seen any of her films, and was unaware of her celebrity status. Dixit explained their relationship by saying, “It was very important that he didn’t know me as an actress because then he would know me as a person first. When people have seen you as an actress, they have pre-conceived notions… None of it was there here with him. I found the right person, I wanted to get married and I did.”

Following her marriage, Dixit relocated to Denver, Colorado, for over a decade. She moved back to Mumbai with her family in October 2011. Speaking about it, Dixit said, “I always love being here. I have grown up here in Mumbai so for me it is like coming back home. It was a different phase in my life, where I wanted to have a home, family, husband and children… everything that I had dreamt of.” In 2018, Dixit along with her husband, founded the production company, RnM Moving Pictures.

On 17 March 2003, Dixit gave birth to a son, Arin. Two years later, on 8 March 2005, she gave birth to another son, Ryan. She described motherhood as “amazing” and added that her kids kept “the child in her alive”.