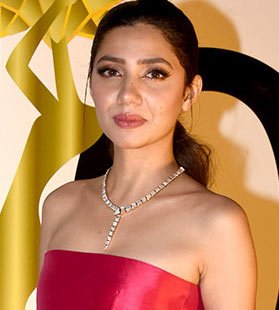 Khan was born in Karachi, Pakistan on 21 December 1984 to parents who are Urdu-speaking Pathans. Her father, Hafeez Khan, was born in Delhi during the British Raj, and migrated to Pakistan after the partition of India. She has a younger brother, Hassaan Khan who is a journalist by profession.

Khan attended Foundation Public School from where she completed her O-Levels. At the age of 17, she moved to California for higher education, where she attended Santa Monica College. She then enrolled in the University of Southern California for her bachelor’s degree. However, she did not complete her undergraduate degree and returned to Pakistan in 2008. During her studies in the United States, she was a cashier at a Rite Aid store in Los Angeles.

Khan at the Zindagi TV press meet in 2016

Khan started her career as a VJ in 2006, hosting the live show Most Wanted on MTV Pakistan which was aired three days a week. She then hosted AAG TV’s reality show Weekends with Mahira in 2008, where she played music videos, spoke to celebrity guests and took phone calls from viewers.

In 2011, Khan made her film debut in a supporting role in Shoaib Mansoor-directed Bol in which she had a supporting role. She played Ayesha, a girl from a conservative lower-middle-class family living in old part of Lahore, who shares a mutual passion for music with her love interest Mustafa, played by Atif Aslam. The film was a critical and commercial success, and became one of the highest-grossing Pakistani films of all time. The same year, Khan also made her TV drama debut in Neeyat directed by Mehreen Jabbar. The serial was set in New York and she played the role of Ayla.

She next appeared in the Sarmad Khoosat-directed drama serial Humsafar. Both the drama and Khan received positive reviews from critics. The drama series was also aired on Zindagi (TV channel) and was successful in India. It earned her a Lux Style Award for Satellite Best TV Actress and a Hum Award for Best Onscreen Couple.

In 2013, she played the role in Sarmad Khoosat-directed Shehr-e-Zaat. The drama earned her Best Actress Awards from Pakistan Media Awards and Hum Awards. From 2013 to 2014, she hosted TUC The Lighter Side of Life, a talk show where she interviewed celebrities.

In 2014, Khan starred in Mohammed Ehteshamuddin-directed drama serial Sadqay Tumhare in which she played the role of Shano. The drama earned her a Lux Style Award for Best TV Actress, two Hum Awards and a Hum Award nomination.

In 2016, she played a leading role in Asim Raza-directed film Ho Mann Jahaan, The film earned her a Lux Style Award for Best Actress (Film) and a Nigar Award nomination for Best Actress.

In early 2017, Khan co-starred in Rahul Dholakia’s Indian film Raees, which was her debut in the Hindi film industry. Before the release of film, ‘Indian Motion Picture Producers Association’ (IMPPA) and ‘The Film Producers Guild of India’ had decided to ban all Pakistani actors, actresses and technicians from working in India due to the tensions created after the 2016 Uri attack, until the situation was normalised. Reportedly, there were rumours that Khan’s scenes would be deleted from the film or she would be replaced by another actress. Shah Rukh Khan, the lead star and co-producer of the film, said that she would not be allowed to promote the film in India. Khan repeatedly received threats from Shiv Sena, an Indian far-right political party. Despite the controversies, the film was released in January 2017 and was a modest commercial success, earning over ₹3.0 billion (US$39 million) worldwide[51] which made Khan the first Pakistani actress to join Bollywood’s 100 Crore Club and become the top grossing actress in Bollywood during the first quarter of 2017.

Khan began her singing career in 2017, when she starred as a rape victim in Shoaib Mansoor’s social drama film Verna. The film received generally unfavourable reviews but her performance was praised and she earned a Lux Style Award for Best Actress in 2018. In 2018, she starred in Meenu Gaur-Farjad Nabi’s romantic comedy 7 Din Mohabbat In. She will also star in Bilal Lashari’s Maula Jatt 2, and made a special appearance in Asim Raza’s Parey Hat Luv.

In 2019, she played the leading role in Superstar, her highest-grossing film domestically at the time.

She will next star opposite Fahad Mustafa in Nabeel Qureshi’s action-comedy film Quaid-e-Azam Zindabad.

Khan met Ali Askari in 2006 in Los Angeles and married him in 2007 in a traditional Islamic wedding ceremony despite Khan’s father being reportedly against the marriage. They have a son, Azlan who was born in 2009.The couple got divorced in 2015.