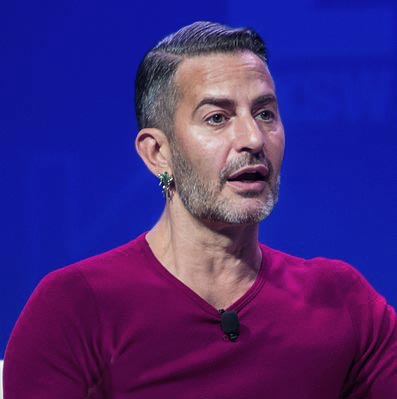 Marc Jacobs (born April 9, 1963) is an American fashion designer. He is the head designer for his own fashion label, Marc Jacobs, and formerly Marc by Marc Jacobs, a diffusion line, which was produced for approximately 15 years having been discontinued after the 2015 fall/winter collection. At one point there were over 200 retail stores in 80 countries. He was the creative director of the French design house Louis Vuitton from 1997 to 2014. Jacobs was on Time magazine’s “2010 Time 100” list of the 100 most influential people in the world, and was #14 on Out magazine’s 2012 list of “50 Most Powerful Gay Men and Women in America”. He was married on 7 April 2019 to his long time partner, Charly Defrancesco.

Marc Jacobs was born to a non-observant Jewish family in New York City. When he was seven, his father, an agent at the William Morris Agency, died. His mother, who remarried three times, was “mentally ill” and “didn’t really take care of her kids”, according to Jacobs. As a teenager, he went to live with his paternal grandmother on the Upper West Side, in an apartment in the Majestic on Central Park West.

He attended the High School of Art and Design and studied at the Parsons School of Design in New York. While at Parsons in 1984, he won the Perry Ellis Gold Thimble Award, Chester Weinberg Gold Thimble Award, and Design Student of the Year. In 1987 he became the youngest designer ever to receive the Council of Fashion Designers of America’s Perry Ellis Award for New Fashion Talent. He also won the Women’s Designer of the Year award from the Council of Fashion Designers of America in 1993.

Council of Fashion Designers of America: