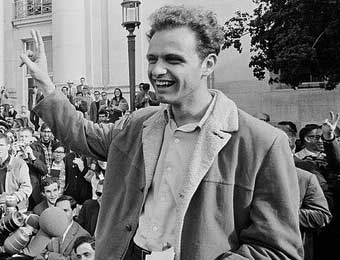 Known for: “Bodies Upon The Gears”

Known for: “Bodies Upon The Gears”

Mario Savio (December 8, 1942 – November 6, 1996) was an American activist and a key member in the Berkeley Free Speech Movement. He is most famous for his passionate speeches, especially the “put your bodies upon the gears” address given at Sproul Hall, University of California, Berkeley on December 2, 1964.

Savio remains historically relevant as an icon of the earliest phase of the 1960s counterculture movement.

Savio was born in New York City to a Sicilian-born Italian-American father who designed and manufactured restaurant equipment. Mario’s mother was also of Italian ancestry (from Veneto), though born in the US, and worked as a retail salesperson. Both his parents were devout Catholics and, as an altar boy, Savio planned to become a priest.

He graduated from Martin Van Buren High School in Queens at the top of his class in 1960 and then went to Manhattan College on a full scholarship as well as Queens College. When he finished in 1963, he spent the summer working with a Catholic relief organization in Taxco, Mexico helping to improve the sanitary problems by building facilities in the slums.

His parents had moved to Los Angeles and that autumn he enrolled at University of California, Berkeley. In March the following year he was arrested while demonstrating against the San Francisco Hotel Association for excluding blacks from non-menial jobs. He was charged with trespassing, along with 167 other protesters. While in jail, a cellmate asked if he was heading for Mississippi that summer to help with the Civil Rights project.

During the summer of 1964, he joined the Freedom Summer projects in Mississippi and was involved in helping African Americans register to vote. He also taught at a freedom school for black children in McComb, Mississippi. In July, Savio, another white civil-rights activist and a black acquaintance were walking down a road in Jackson and were attacked by two men. They filed a police report where the FBI became involved. However, the case stalled until President Lyndon Johnson, who had recently signed the Civil Rights Act, allowed the FBI to look into it as a civil-rights violation. Eventually one of the attackers was found, charged with misdemeanor assault and fined $50.

After Savio participated in the protests during Freedom Summer of the Civil rights movement, he was inspired to fight further against the violence he had witnessed. The violence and racism he came across in the South made him more rebellious to the unfair nature of the American Society and its treatment of minorities; it made him want change which in turn influenced him to be part of that change. When Savio returned to Berkeley after his time in Mississippi, he intended to raise money for SNCC, but found that the university had banned all political activity and fundraising. He told Karlyn Barker in 1964 that it was a question as to whose side one was on. “Are we on the side of the civil rights movement? Or have we gotten back to the comfort and security of Berkeley, California, and can we forget the sharecroppers whom we worked with just a few weeks back? Well, we couldn’t forget.”

Savio’s part in the protest on the Berkeley campus started on October 1, 1964, when former graduate student Jack Weinberg was manning a table for the Congress of Racial Equality (CORE). He was arrested when he refused to provide identification. The University police had just put him into a police car when someone from the surrounding crowd yelled, “We can all see better if we sit down.” Soon those in front of and behind the police car starting sitting as the call “sit down” echoed through the crowd, trapping the car in the plaza. Savio, along with others during the 32-hour sit-in, took off his shoes and climbed on top of the car and spoke with words that roused the crowd into a frenzy.

The last time he climbed on the police car was to tell the crowd of a short-term understanding that had been met with UC President Clark Kerr. Savio said to the crowd, “I ask you to rise quietly and with dignity and go home,” and the crowd did exactly what he said. After this Savio became the prominent leader of the newly formed Free Speech Movement. Negotiations failed to change the situation; therefore direct action began in Sproul Hall on December 2. There, Savio gave his most famous speech, on the “operation of the machine”, in front of 4,000 people. He and 800 others were arrested that day. In 1967, he was sentenced to 120 days at Santa Rita Jail. He told reporters that “[he] would do it again”.

Between 1965 and his death, Savio held a variety of jobs, including as a sales clerk in Berkeley and instructor at Sonoma State University. In 1965, he married Suzanne Goldberg, whom he had met in the Free Speech Movement. Two months after their wedding, they moved to England because Savio was awarded a scholarship to the University of Oxford. While there, they had their first child, Stefan. Savio did not complete his degree at Oxford, and they moved back to California in February 1966. In 1968, he ran for state senator from Alameda County on the Peace and Freedom Party ticket, but lost to Nicholas C. Petris, a liberal Democrat.

Savio had a history of heart problems and was admitted to Columbia-Palm Drive Hospital in Sebastopol, California, on November 2, 1996. He slipped into a coma on November 5 and died the following day, shortly after being removed from life support.

In 1997, the steps of Sproul Plaza, from which he had given his most famous speech, were officially renamed the “Mario Savio Steps”.

Savio’s famous speech is sampled in many songs including “We Are The New Ones” by Dope Stars Inc., “It’s Up To You” by electro turntablist Steinski (& Mass Media); “No More Nervous Breakdown” from the album Shiva Space Machine by the Montreal band Me Mom and Morgentaler; “An Ounce Of Prevention” from the album On Little Known Frequencies by the band From Monument to Masses; “Timelessness” by the band Fear Factory; “The Movie’s Over” by the Australian band Cog; “Article IV” by the Santa Cruz band Good Riddance; “Here Come The Pigs” by Deadsoul Tribe; “means of existence” by Phobia; “Telegraph Avenue” by punk band Rancid; and “Wretches and Kings” from the album A Thousand Suns by Linkin Park. It is also paraphrased in an episode of Battlestar Galactica (Lay Down Your Burdens, Part II), given by Chief Galen Tyrol, the head of a union. It is also used in the intro to the podcast of the Dean Blundell Show on 102.1 the Edge, Toronto’s largest radio station.

On March 12, 2011, at the end of an announcement by hacktivist group Anonymous of an attack, called the Empire State Rebellion, on the Federal Reserve, the International Monetary Fund, the Bank of International Settlements and the World Bank, an excerpt of Savio’s speech was included. Since the onset of the Occupy movement in the United States in Fall 2011, Savio’s speech and his activism have been cited many times. His speech has also been cited and referenced by Stephen Pastis’s comic, Pearls Before Swine, by the main character, Rat.

On October 16, 2012, the Sebastopol City Council rededicated the Downtown Plaza as the “Mario Savio Free Speech Plaza”. On November 15, 2012 the “Mario Savio Speakers’ Corner” was dedicated on the campus of Sonoma State University. At the ceremony, Lynne Hollander Savio told the audience, “I hope you will use this free speech corner often, to advocate and organize with dignity and responsibility for the causes you believe in.”

Footage of him is prominently featured in the 1990 documentary film Berkeley in the Sixties.

An actor playing Mario Savio appears in the 2017 movie The Post, where he speaks a few lines of Savio’s most famous speech.

Savio’s “Bodies upon the gears” speech is repeatedly used in the 2017 film The Pirates of Somalia.