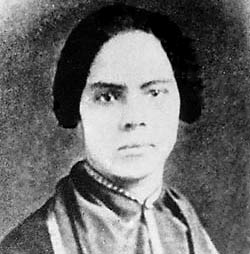 Shadd Cary was an abolitionist who became the first female African-American newspaper editor in North America when she edited The Provincial Freeman in 1853.

Mary Ann Shadd was born in Wilmington, Delaware, on October 9, 1823, the eldest of 13 children to Abraham Doras Shadd (1801–1882) and Harriet Burton Parnell, who were free African-Americans. Abraham D. Shadd was a grandson of Hans Schad, alias John Shadd, a native of Hesse-Cassel who had entered the United States serving as a Hessian soldier with the British Army during the French and Indian War. Hans Schad was wounded and left in the care of two African-American women, mother and daughter, both named Elizabeth Jackson. The Hessian soldier and the daughter were married in January 1756 and their first son was born six months later.

A. D. Shadd was a son of Jeremiah Shadd, John’s younger son, who was a Wilmington butcher. Abraham Shadd was trained as a shoemaker and had a shop in Wilmington and later in the nearby town of West Chester, Pennsylvania. In both places he was active as a conductor on the Underground Railroad and in other civil rights activities, being an active member of the American Anti-Slavery Society, and, in 1833, named President of the National Convention for the Improvement of Free People of Colour in Philadelphia.

Growing up, her family’s home frequently served as a refuge for fugitive slaves; however, when it became illegal to educate African-American children in the state of Delaware, the Shadd family moved to Pennsylvania, where Mary attended a Quaker Boarding School. In 1840, after being away at school, Mary Ann returned to East Chester and established a school for black children. She also later taught in Norristown, Pennsylvania, and New York City.

Three years after the passage of the Fugitive Slave Act of 1850, A. D. Shadd moved his family to Canada, settling in North Buxton, Ontario. In 1858, he became one of the first black men to be elected to political office in Canada, when he was elected to the position of Counsellor of Raleigh Township, Ontario.

When the Fugitive Slave Law of 1850 in the United States threatened to return free northern blacks and escaped slaves into bondage, Shadd and her brother Isaac moved to Canada and settled in Windsor, Ontario, across the border from Detroit. This is where Shadd’s symbolic effort to create free black settlements in Canada began. While in Windsor, she founded a racially integrated school with the support of the American Missionary Association, published a pamphlet called, “Notes on Canada West,” which was a plea for emigration and discussed the benefits, as well as the opportunities, of blacks in the area, and she also ran an anti-slavery newspaper called The Provincial Freeman, which made her the first female editor in North America. Isaac managed the daily business affairs of the newspaper and would go on to host gatherings to plan the raid on Harper’s Ferry at his home.

In Jane Rhodes’ biography of Cary, Mary Ann Shadd Cary: The Black Press and Protest in the Nineteenth Century, Rhodes noted that Cary was one of the first to advocate that African-Americans leave the United States and immigrate to Canada. Her newspaper operated from 1853 until 1860 providing strong editorial commentary, culture and information about things going on in other places. Cary, born free to free parents who helped slaves escape using the Underground Railroad, published her newspaper in Canada, but it also circulated in major northern cities across the United States.

By observing the black press movement of this era and the publishers used the press to uplift their race in an attempt to freedom for all African Americans, much can be gleaned from this period of history. These were the first newspapers to address African- Americans instead of whites and for the first time showed African Americans as intellectually sound and capable of appreciating culture and education. These newspapers provided them with a means to take on their own political destinies. Cary, the first African-American woman to publish and own a newspaper that distributed in North America, founded The Provincial Freeman in 1853. She published her final edition in 1861, right before the war would break out. Although white abolitionist newspapers featured articles against slavery primarily based on religious reasons, they did not offer African-Americans the opportunity to express themselves on its pages. Historians have pointed out that these newspapers’ archives are not complete, but still offer the best insight into the minds of African-Americans during this time. These newspapers included poetry, letters, travelogues and more.

These newspapers worked to uplift the race and to change the perception that white Americans held about former slaves. “Black community leaders stressed that education, strong moral values, honest labor, thrift, and so forth would change the myths that whites had about black’s inferiority. Essentially, this meant the ascent from ignorance to literacy.” Cary and Douglass both used their papers to promote this line of thinking.

The role of African-American newspapers from 1850-1860 leaves much to be discovered. The mere fact that these newspaper owners were able to buy and operate equipment to produce weekly publications during a period when no one held a journalism degree or had any formal training is fascinating. However, the fact that African-Americans, many of whom were former slaves, were able to produce newspapers when few of their contemporaries could read or write is even more astounding.

Historians believe these newspapers and the portrayal of African–American leaders and their reactions to these critical political times in the United States are the only ones in existence. Mainstream newspapers, even those with abolitionist views, did not include comments from minorities. Still, historians believe Cary’s and Douglass’ newspapers were not only read by other African Americans but by Caucasians as well. In fact, Carol B. Conaway writes in “Racial Uplift: The Nineteenth Century Thought of Black Newspaper Publisher Mary Ann Shadd Cary,” that these newspapers shifted the focus from whites to blacks in an empowering way. She writes that whites read these newspapers to monitor the dissatisfaction level of the treatment of African Americans and to measure their tolerance for continued slavery in America.

These newspapers used their mainstream counterparts after which to model their newspapers. According to research conducted by William David Sloan in his various historical textbooks, the first newspapers were about four pages and had one blank page to provide a place for people to write their own information before passing it along to friends and relatives. He goes even farther to discuss how the newspapers during these early days were the center of information for society and culture.

Mary Ann traveled around Canada and the United States advocating for full racial integration through education and self-reliance. She promoted emigration to Canada amongst freemen, publishing A Plea for Emigration; or Notes of Canada West, in Its Moral, Social and Political Aspect: with Suggestions respecting Mexico, West Indies and Vancouver’s Island for the Information of Colored Emigrants in 1852.

She attempted to participate in the 1855 Philadelphia Colored Convention, but the assembly debated whether to even let her sit as a delegate. Her advocacy of emigration made her a controversial figure and she was only admitted by a slim margin of 15 votes. According to Frederick Douglass’s Paper, although she gave a speech at the Convention advocating for emigration, she was so well-received that the delegates voted to give her ten more minutes to speak. However, her presence at the Convention was largely elided from the minutes, likely because she was a woman.

Mary Ann Shadd Cary’s former residence in the U Street Corridor was declared a National Historic Landmark in 1976. In 1987 she was designated a Women’s History Month Honoree by the National Women’s History Project. In 1998, Mary Ann Shadd Cary was inducted into the National Women’s Hall of Fame. She was also honored by Canada, being designated a Person of National Historic Significance. In 2018 the New York Times published a belated obituary for her.