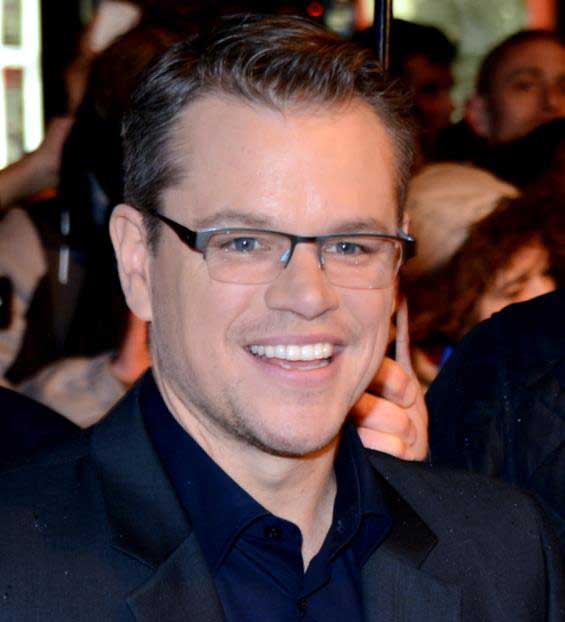 Matthew Paige Damon (/ˈdeɪmən/; born October 8, 1970) is an American actor, film producer, screenwriter and philanthropist. He is ranked among Forbes magazine’s most bankable stars and is one of the highest-grossing actors of all time. Damon has received various accolades, including an Academy Award from five nominations, two Golden Globe Awards from eight nominations, and has been nominated for three British Academy Film Awards and seven Emmy Awards.

Born and raised in Cambridge, Massachusetts, Damon began his acting career by appearing in high school theater productions. He made his professional acting debut in the film Mystic Pizza (1988). He came to prominence in 1997, when he wrote and starred in Good Will Hunting, alongside Ben Affleck, which won them the Academy and Golden Globe awards for Best Screenplay and earned Damon a nomination for the Academy Award for Best Actor. He continued to garner praise from critics for his roles as the eponymous character in Saving Private Ryan (1998), the antihero in The Talented Mr. Ripley (1999), a fallen angel in Dogma (1999) and Jay and Silent Bob Reboot (2019), an energy analyst in Syriana (2005), and a corrupt Irish-American police officer in The Departed (2006). In 2019 he starred as race car driver and designer Carroll Shelby in James Mangold’s Ford v Ferrari.

Damon is also known for his starring roles as Jason Bourne in the Bourne franchise (2002–2016) and as a con man in the Ocean’s trilogy (2001–2007). For his supporting role as the rugby player Francois Pienaar in Invictus (2009) and his leading role as an astronaut stranded on Mars in The Martian (2015), Damon received Academy Award nominations for Best Supporting Actor and Best Actor, respectively. The latter also won him a Golden Globe Award for Best Actor. Damon has received Emmy Award nominations for his portrayal of Scott Thorson in the biopic Behind the Candelabra (2013) and for producing the reality series Project Greenlight. He also received an Academy Award nomination for producing Manchester by the Sea (2016).

In addition to acting in films, Damon has performed voice-over work in both animated and documentary films and has established two production companies with Affleck. He has been involved in charitable work, including One Campaign, H2O Africa Foundation, Feeding America, and Water.org. Damon is married to Luciana Bozán Barroso, and they have four daughters together.