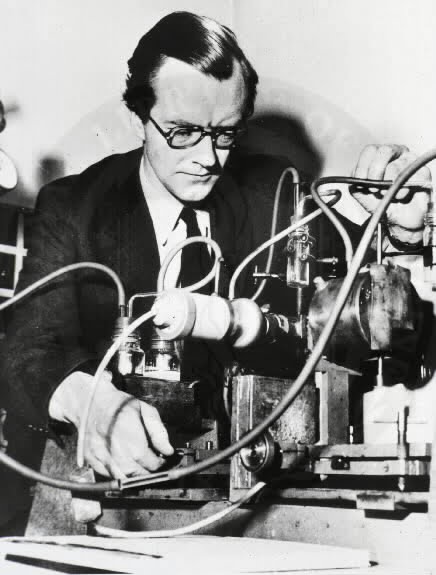 Maurice Hugh Frederick Wilkins CBE FRS (15 December 1916 – 5 October 2004) was a New Zealand-born British physicist and molecular biologist, and Nobel laureate whose research contributed to the scientific understanding of phosphorescence, isotope separation, optical microscopy and X-ray diffraction, and to the development of radar. He is best known for his work at King’s College London on the structure of DNA.

Wilkins’ work on DNA falls into two distinct phases. The first was in 1948–50, when his initial studies produced the first clear X-ray images of DNA, which he presented at a conference in Naples in 1951 attended by James Watson. During the second phase, 1951–52, Wilkins produced clear “B form” “X” shaped images from squid sperm, images he sent to James Watson and Francis Crick, causing Watson to write “Wilkins… has obtained extremely excellent X-ray diffraction photographs” [of DNA].

In 1953 Wilkins’ colleague Rosalind Franklin instructed Raymond Gosling to hand over to Wilkins a high quality image of “B” form DNA (Photo 51), which she had made in 1952 but had “put it aside” as she was leaving King’s College London. Wilkins showed it to Watson. This image, along with the knowledge that Linus Pauling had proposed an incorrect structure of DNA, “mobilised” Watson and Crick to restart model building. With additional information from research reports of Wilkins and Franklin, obtained via Max Perutz, Watson and Crick correctly described the double-helix structure of DNA in 1953.

Wilkins continued to test, verify, and make significant corrections to the Watson-Crick DNA model and to study the structure of RNA. Wilkins, Crick, and Watson were awarded the 1962 Nobel Prize for Physiology or Medicine, “for their discoveries concerning the molecular structure of nucleic acids and its significance for information transfer in living material.”

Wilkins was born in Pongaroa, New Zealand, where his father, Edgar Henry Wilkins was a medical doctor. His family had come from Dublin, where his paternal and maternal grandfathers were, respectively, Headmaster of Dublin High School and a Chief of Police. The Wilkinses moved to Birmingham, England when Maurice was 6. Later, he attended Wylde Green College and then went to King Edward’s School, Birmingham from 1929 to 1934.

Wilkins went to St John’s College, Cambridge in 1935. He studied the Natural Sciences Tripos specialising in Physics, and received a Bachelor of Arts degree.[when?] Mark Oliphant, who was one of Wilkins’ instructors at St. John’s, had been appointed to the Chair of Physics at the University of Birmingham, and had appointed John Randall to his staff. Wilkins became a Ph.D. student of Randall at the University of Birmingham. In 1945, they published four papers in the Proceedings of the Royal Society on phosphorescence and electron traps. Wilkins received a PhD for this work in 1940.

In 1960 he was presented with the American Public Health Association’s Albert Lasker Award, and in 1962 he was made a Commander of the Order of the British Empire. Also in 1962 he shared the Nobel Prize in Physiology or Medicine with Watson and Crick for the discovery of the structure of DNA.

On Saturday 20 October 1962 the award of Nobel prizes to John Kendrew and Max Perutz, and to Crick, Watson, and Wilkins was satirised in a short sketch in the BBC TV programme That Was The Week That Was with the Nobel Prizes being referred to as ‘The Alfred Nobel Peace Pools.’

From 1969–1991, Wilkins was the founding President of the British Society for Social Responsibility in Science.

In 2000, King’s College London opened the Franklin-Wilkins Building in honour of Dr. Franklin’s and Professor Wilkins’ work at the college.

The wording on the DNA sculpture (donated by James Watson) outside Clare College’s Thirkill Court, Cambridge, England is

i) “These strands unravel during cell reproduction. Genes are encoded in the sequence of bases.”
ii) “The double helix model was supported by the work of Rosalind Franklin and Maurice Wilkins.”

b) on the helices:

i) “The structure of DNA was discovered in 1953 by Francis Crick and James Watson while Watson lived here at Clare.”
ii) “The molecule of DNA has two helical strands that are linked by base pairs Adenine – Thymine or Guanine – Cytosine.”

Launched in 2002 as the Centre for Molecular Biodiscovery at the University of Auckland, in 2006 it was renamed the Maurice Wilkins Centre.

Wilkins was married twice. His first wife, Ruth, was an art student whom he met whilst he was at Berkeley. Their marriage ended in divorce, and Ruth bore her son by Wilkins after their divorce. Wilkins married his second wife Patricia Ann Chidgey in 1959. They had four children, Sarah, George, Emily and William. His widow Patricia and the children from their marriage survived him.

In the years before World War II, he was an active anti-war activist, joining the Cambridge Scientists Anti-War Group. He joined the Communist Party, until the invasion of Poland by the Soviet Army in September 1939. Formerly classified UK security service papers reveal that Wilkins came under suspicion of leaking atomic secrets. The files, released in August 2010, indicate surveillance of Wilkins ended by 1953. “After the war I wondered what I would do, as I was very disgusted with the dropping of two bombs on civilian centres in Japan,” he told Britain’s Encounter radio program in 1999.

Wilkins published his autobiography, The Third Man of the Double Helix, in 2003.