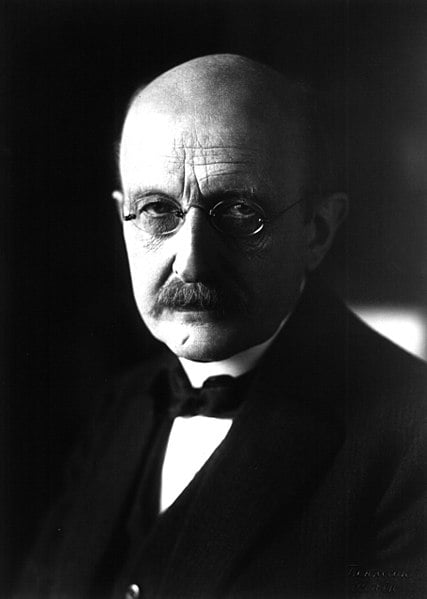 Max Karl Ernst Ludwig Planck, ForMemRS (23 April 1858 – 4 October 1947) was a German theoretical physicist whose discovery of energy quanta won him the Nobel Prize in Physics in 1918.

Planck made many contributions to theoretical physics, but his fame as a physicist rests primarily on his role as the originator of quantum theory, which revolutionized human understanding of atomic and subatomic processes. In 1948 the German scientific institution Kaiser Wilhelm Society (of which Planck was twice president) was renamed Max Planck Society (MPS). The MPS now includes 83 institutions representing a wide range of scientific directions.

Planck came from a traditional, intellectual family. His paternal great-grandfather and grandfather were both theology professors in Göttingen; his father was a law professor at the University of Kiel and Munich. One of his uncles was also a judge.

Planck was born in 1858 in Kiel, Holstein, to Johann Julius Wilhelm Planck and his second wife, Emma Patzig. He was baptized with the name of Karl Ernst Ludwig Marx Planck; of his given names, Marx (a now obsolete variant of Markus or maybe simply an error for Max, which is actually short for Maximilian) was indicated as the “appellation name”. However, by the age of ten he signed with the name Max and used this for the rest of his life.

He was the 6th child in the family, though two of his siblings were from his father’s first marriage. War was common during Planck’s early years and among his earliest memories was the marching of Prussian and Austrian troops into Kiel during the Second Schleswig War in 1864. In 1867 the family moved to Munich, and Planck enrolled in the Maximilians gymnasium school, where he came under the tutelage of Hermann Müller, a mathematician who took an interest in the youth, and taught him astronomy and mechanics as well as mathematics. It was from Müller that Planck first learned the principle of conservation of energy. Planck graduated early, at age 17. This is how Planck first came in contact with the field of physics.

Planck was gifted when it came to music. He took singing lessons and played piano, organ and cello, and composed songs and operas. However, instead of music he chose to study physics.

The Munich physics professor Philipp von Jolly advised Planck against going into physics, saying, “In this field, almost everything is already discovered, and all that remains is to fill a few holes.” Planck replied that he did not wish to discover new things, but only to understand the known fundamentals of the field, and so began his studies in 1874 at the University of Munich. Under Jolly’s supervision, Planck performed the only experiments of his scientific career, studying the diffusion of hydrogen through heated platinum, but transferred to theoretical physics.

In 1877 he went to the Friedrich Wilhelms University in Berlin for a year of study with physicists Hermann von Helmholtz and Gustav Kirchhoff and mathematician Karl Weierstrass. He wrote that Helmholtz was never quite prepared, spoke slowly, miscalculated endlessly, and bored his listeners, while Kirchhoff spoke in carefully prepared lectures which were dry and monotonous. He soon became close friends with Helmholtz. While there he undertook a program of mostly self-study of Clausius’s writings, which led him to choose thermodynamics as his field.

In October 1878 Planck passed his qualifying exams and in February 1879 defended his dissertation, Über den zweiten Hauptsatz der mechanischen Wärmetheorie (On the second law of thermodynamics). He briefly taught mathematics and physics at his former school in Munich.

By the year 1880, Planck had obtained the two highest academic degrees offered in Europe. The first was a doctorate degree after he completed his paper detailing his research and theory of thermodynamics. He then presented his thesis called Gleichgewichtszustände isotroper Körper in verschiedenen Temperaturen (Equilibrium states of isotropic bodies at different temperatures), which earned him a habilitation.

With the completion of his habilitation thesis, Planck became an unpaid Privatdozent (German academic rank comparable to lecturer/assistant professor) in Munich, waiting until he was offered an academic position. Although he was initially ignored by the academic community, he furthered his work on the field of heat theory and discovered one after another the same thermodynamical formalism as Gibbs without realizing it. Clausius’s ideas on entropy occupied a central role in his work.

In April 1885 the University of Kiel appointed Planck as associate professor of theoretical physics. Further work on entropy and its treatment, especially as applied in physical chemistry, followed. He published his Treatise on Thermodynamics in 1897. He proposed a thermodynamic basis for Svante Arrhenius’s theory of electrolytic dissociation.

In 1889 he was named the successor to Kirchhoff’s position at the Friedrich-Wilhelms-Universität in Berlin – presumably thanks to Helmholtz’s intercession – and by 1892 became a full professor. In 1907 Planck was offered Boltzmann’s position in Vienna, but turned it down to stay in Berlin. During 1909, as a University of Berlin professor, he was invited to become the Ernest Kempton Adams Lecturer in Theoretical Physics at Columbia University in New York City. A series of his lectures were translated and co-published by Columbia University professor A. P. Wills. He retired from Berlin on 10 January 1926, and was succeeded by Erwin Schrödinger.

After the apartment in Berlin, the Planck family lived in a villa in Berlin-Grunewald, Wangenheimstrasse 21. Several other professors from University of Berlin lived nearby, among them theologian Adolf von Harnack, who became a close friend of Planck. Soon the Planck home became a social and cultural center. Numerous well-known scientists, such as Albert Einstein, Otto Hahn and Lise Meitner were frequent visitors. The tradition of jointly performing music had already been established in the home of Helmholtz.

During the First World War Planck’s second son Erwin was taken prisoner by the French in 1914, while his oldest son Karl was killed in action at Verdun. Grete died in 1917 while giving birth to her first child. Her sister died the same way two years later, after having married Grete’s widower. Both granddaughters survived and were named after their mothers. Planck endured these losses stoically.

In January 1945 Erwin, to whom he had been particularly close, was sentenced to death by the Nazi Volksgerichtshof because of his participation in the failed attempt to assassinate Hitler in July 1944. Erwin was executed on 23 January 1945.