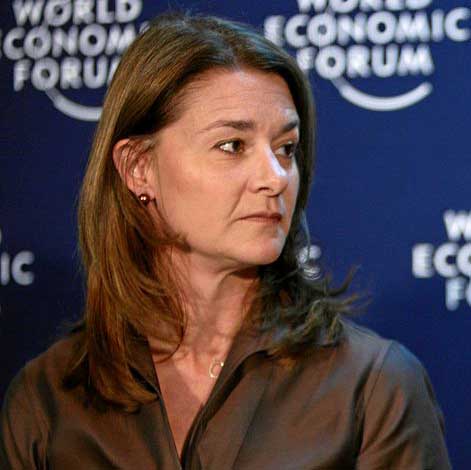 Melinda Ann Gates (née French; August 15, 1964) is an American philanthropist and a former general manager at Microsoft. In 2000, she co-founded the Bill & Melinda Gates Foundation with her husband Bill Gates, the world’s largest private charitable organization as of 2015. Gates has consistently been ranked as one of the world’s most powerful women by Forbes.

Melinda Ann French was born on August 15, 1964 in Dallas, Texas. She is the second of four children born to Raymond Joseph French Jr., an aerospace engineer, and Elaine Agnes Amerland, a homemaker. Melinda has an older sister and two younger brothers.

Melinda, a Catholic, attended St. Monica Catholic School, where she was the top student in her class. At age 14, Melinda was introduced to the Apple II by her father, which later inspired her interest in computer games and the BASIC programming language.

Melinda graduated as valedictorian from Ursuline Academy of Dallas in 1982. She earned a bachelor’s degree in computer science and economics from Duke University in 1986 and an MBA from Duke’s Fuqua School of Business in 1987. At Duke, Melinda was a member of the Kappa Alpha Theta sorority, Beta Rho Chapter.

Gates’ first job was tutoring children in mathematics and computer programming. After graduation, she became a marketing manager with Microsoft, being responsible for leading the development of various multimedia products. These included Cinemania, Encarta, Publisher, Microsoft Bob, Money, Works (Macintosh) and Word. She worked on Expedia, which became one of the most popular travel booking websites. Gates later recalled a software demonstration of Microsoft Bob, that was “one of the hardest things I’ve ever done”. However, the program was a commercial failure. In the early 1990s, Gates was appointed as General Manager of Information Products, a position which she held until 1996. [third-party source needed] She left Microsoft to focus on starting and raising her family.

Gates served as a member of Duke University’s Board of Trustees from 1996 to 2003. She attends the annual Bilderberg Group conference and has held a seat on the Board of Directors of The Washington Post company since 2004. She was also on the Board of Directors at Drugstore.com, but left in August 2006 to focus on philanthropy projects. Since 2000, Gates has been active in the public eye, stating “As I thought about strong women of history, I realized that they stepped out in some way”. This has helped her work become recognized, while shaping and delivering goals of the Bill & Melinda Gates Foundation. As of 2014, Bill and Melinda have donated US$28 billion to the Foundation. In 2015 Gates founded Pivotal Ventures as a separate, independent organization to identify, help develop and implement innovative solutions to problems affecting U.S. women and families.

In 2019, Gates debuted as an author with the book The Moment of Lift: How Empowering Women Changes the World. Former President Barack Obama starred in a comedy sketch in order to promote the book. The book highlights the failure to acknowledge women’s unpaid work, drawing on feminist economist Dame Marilyn Waring’s book If Women Counted.

Melinda began dating Microsoft CEO Bill Gates in 1987, after meeting him at a trade fair in New York. In 1994, she married Gates in a private ceremony held in Lanai, Hawaii. They have three children: Jennifer, Phoebe and Rory Gates. The family resides in Xanadu 2.0, an earth-sheltered mansion in the side of a hill overlooking Lake Washington in Medina, Washington.

Gates and her husband were suggested as possible vice-presidential picks in the 2016 United States presidential election, according to a reportedly hacked email published by WikiLeaks from Hillary Clinton’s campaign chairman, John Podesta.

In 2002, Melinda and Bill Gates received the Award for Greatest Public Service Benefiting the Disadvantaged, an award given out annually by Jefferson Awards.

In November 2006, Melinda was awarded the Insignia of the Order of the Aztec Eagle, together with Bill, who was awarded the Placard of the same order, both for their philanthropic work around the world in the areas of health and education, particularly in Mexico, and specifically in the program “Un país de lectores”.

In May 2006, in honor of her work to improve the lives of children locally and around the world, Seattle Children’s Hospital dedicated the Melinda French Gates Ambulatory Care building at Seattle Children’s (formerly Children’s Hospital and Regional Medical Center). She chaired a campaign for the hospital to fundraise $300 million to expand facilities, fund under-compensated and uncompensated care, and grow the hospital’s research program to find cures and treatments.

In 2007, Gates received an honorary doctorate in medicine from the Karolinska Institute in Stockholm, Sweden. In 2009, she and her husband received honorary degrees from the University of Cambridge. Their benefaction of $210 million in 2000 set up the Gates Cambridge Trust, which funds postgraduate scholars from outside the UK to study at the University.[41][42] Lastly, she was awarded an honorary Doctor of Humane Letters by Duke University in 2013 as a tribute for her philanthropic commitment.

She was awarded the UCSF medal in 2013.  Gates was appointed an honorary Dame Commander of the Order of the British Empire in 2013 for services to philanthropy and international development. In recognition of the foundation’s philanthropic activities in India, Bill and Melinda jointly received India’s third-highest civilian honor, Padma Bhushan, in 2015. In 2016, President Barack Obama awarded Gates and her husband with the Presidential Medal of Freedom for their philanthropic efforts.

In 2017, President François Hollande awarded Gates and her husband with France’s highest national award, the Legion of Honour, in Paris for their charity efforts. That year, she was awarded the Otto Hahn Peace Medal 2016 of the United Nations Association of Germany (DGVN), Berlin-Brandenburg, “for outstanding services to peace and international understanding” in the historic Berlin Town Hall. That year, Gates was listed by UK-based company Richtopia at number 12 in the list of 200 Most Influential Philanthropists and Social Entrepreneurs Worldwide.