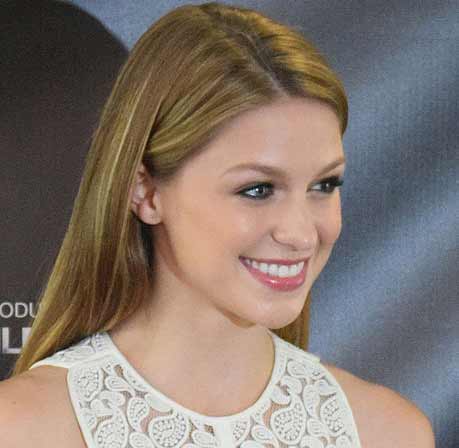 Melissa Marie Benoist (/bəˈnɔɪst/; born October 4, 1988) is an American actress and singer. She has performed on stage and in television and film. She is known for her portrayal of the titular character in the CBS/CW DC Comics–based superhero drama series Supergirl (2015–present).

On stage, Benoist made her Broadway debut in 2018 as Carole King in the jukebox musical Beautiful: The Carole King Musical.

Benoist was born in Houston, Texas, to Julie and Jim Benoist, a physician. They divorced when she was young. Her paternal great-grandfather was of French descent. She has two sisters: Jessica, a novelist, and Kristina, an ecological scientist, and five half-siblings from her father’s remarriage. She was raised mostly by her mother in the suburbs of Denver, Colorado, after her parents’ separation.

She started dance classes at the age of three, focusing on jazz, ballet, and tap. When she was four years old, her aunt put her in a church play she was directing; after that, she began doing community children’s theatre in her hometown.

As a teenager, Benoist performed anonymously at Disneyland in various medleys of musical songs for three summers with the Academy of Theatre Arts, a musical theatre school she was attending, located in Littleton, Colorado, run by Paul Dwyer and Alann Worley.[15] She performed locally in a number of theatrical productions, including A Month in the Country, Cinderella, A Chorus Line, and Bye Bye Birdie at the Town Hall Arts Center, a professional theatre located in the Denver metro area. Instead of attending high school graduation parties, she performed the play Evita with other cast members at the former Country Dinner Playhouse.

In 2006, The Denver Post named Benoist one of Colorado’s five “Can’t Miss Kids”. She graduated from Arapahoe High School in Centennial, Colorado, in 2007, and then she moved to New York City to pursue a career in musical theatre. She initially attended Marymount Manhattan College for the BFA musical theatre program but in her sophomore year, she switched majors to theatre, due to her admiration for 19th-century Russian plays. She graduated from Marymount Manhattan College with a Bachelor of Arts in Theatre Arts in 2011. While attending college, she played Millie Dilmount in an urban off-off-Broadway production of Thoroughly Modern Millie and Rosalind in As You Like It at the Theresa Lang Theatre.

During her first semester in college, when she was learning to ride a bike, a cab backed into her and left a visible scar above her eyebrows. She also has a tattoo of a bicycle on her left foot.

In 2015, it was announced that she and her Glee co-star Blake Jenner were married. Benoist commented that they had been married “longer than anybody knows”, with some sources claiming that the couple actually wed the same year of their engagement in 2013. In late December 2016, she filed for divorce citing “irreconcilable differences”. The divorce was finalized in December 2017.

Also in 2015, Benoist suffered an injury that tore her iris. The incident caused one pupil to be permanently enlarged. In November 2019 in an Instagram video, Benoist revealed that the injury to her iris was due to an iPhone being thrown at her during a domestic dispute, in a relationship marked by repeated domestic violence. Previously, the injury had been said to have been caused when she tripped down stairs and fell into a potted plant.

In October 2017, Benoist helped with Chris Wood’s launch of his website “I Don’t Mind” that works to put a stop to the stigma around mental illnesses, admitting that she has struggled with depression and anxiety attacks since she was 13 years old. She said that Wood’s words enabled her to admit her own issues with depression to others. Benoist and Wood announced their engagement on February 10, 2019, and married in September 2019. On March 4, 2020, the couple announced on Instagram that they were expecting their first child.