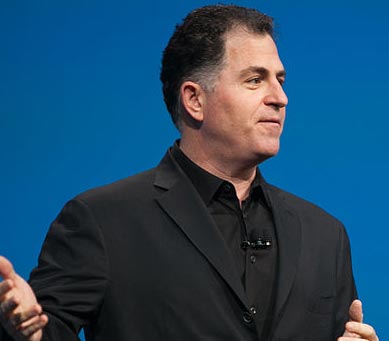 Michael Saul Dell (born February 23, 1965) is an American billionaire businessman and philanthropist. He is the founder, chairman and CEO of Dell Technologies, one of the world’s largest technology infrastructure companies. He is ranked 27th richest in the world by Forbes, with a net worth of $27.2 billion as of April 2020.

In 2011, his 243.35 million shares of Dell Inc. stock were worth $3.5 billion, giving him 12% ownership of the company. His remaining wealth of roughly $10 billion is invested in other companies and is managed by MSD Capital, which incorporates his initials. In January 2013 it was announced that he had bid to take Dell Inc. private for $24.4 billion in the biggest management buyout since the Great Recession. Dell Inc. officially went private in October 2013. The company once again went public in December 2018.

Dell was born in 1965 in Houston, to a Jewish family whose surname reflects the translation into English of the original German Tal (“valley” or “dale [q.v.]”; modern common-noun spelling Tal) upon the family’s immigration to the United States. His parents were Lorraine Charlotte (née Langfan), a stockbroker, and Alexander Dell, an orthodontist. Michael Dell attended Herod Elementary School in Houston. He would go on to attend Memorial High School. In a bid to enter business early, he applied to take a high school equivalency exam at age eight. In his early teens, he invested his earnings from part-time jobs in stocks and precious metals.

Dell purchased his first calculator at age seven and encountered an early teletype terminal in junior high. At age 15, after playing with computers at Radio Shack, he got his first computer, an Apple II, which he promptly disassembled to see how it worked. He got a job as a dishwasher at age 12 and was quickly promoted to maitre d’. Dell attended Memorial High School in Houston, selling subscriptions to the Houston Post in the summer. Dell’s parents wanted him to be a doctor and in order to please them, he took up pre-med at the University of Texas in 1983. Dell continued learning to target specific populations for newspaper subscriptions rather than just making cold calls, and earned $18,000 that summer. He hired several employees, and after earning a gross profit of nearly $200,000 in his first year of business, Dell dropped out of the University of Texas at age 19.

In February 2018, it was reported that in 2014, Dell had paid $100.5 million for Manhattan’s One57 penthouse, which was then a record for the most expensive home ever sold in the city.

Dell married Susan Lieberman on October 28, 1989, in Austin, Texas; the couple reside there with their four children.

Philanthropy
In 1999, Michael and Susan Dell established the Michael and Susan Dell Foundation, which focuses on, among other causes, grants, urban education, childhood health and family economic stability. In 2006, the foundation provided $50 million in grants to three health-related organizations associated with the University of Texas: the Michael & Susan Dell Center for Advancement of Healthy Living, the Dell Pediatric Research Institute to complement the Dell Children’s Medical Center, as well as funding for a new computer science building at the University of Texas at Austin campus. In 2013, the foundation provided an additional $50 million commitment to establish the Dell Medical School at the University of Texas at Austin. Since 1999, the MSDF has committed $1.23 billion to non-profits and social enterprises in the United States, India and South Africa. Dell is also behind the founding of the Dell Jewish Community Campus in the Northwest Hills neighborhood of Austin.

By 2011, the foundation had committed more than $650 million to children’s issues and community initiatives in the United States, India and South Africa. Today the foundation has over $466 million assets under management.

In 2002, Dell received an honorary doctorate in Economic Science from the University of Limerick in honor of his investment in Ireland and the local community and for his support for educational initiatives.

In 2012, the Michael and Susan Dell Foundation committed $50 million for medical education. The Dell Medical School began enrolling students in 2016.

In 2014, he donated $1.8 million to the Friends of the Israel Defense Forces.

In 2017, in the wake of Hurricane Harvey, Dell, a Houston native, pledged $36 million to relief efforts.

In May 2017, Dell donated $1 billion to his foundation, which focuses on child poverty; it makes both impact investments and charitable donations.

In 2018 Dell Technologies returned to public markets through a complicated financial restructuring.