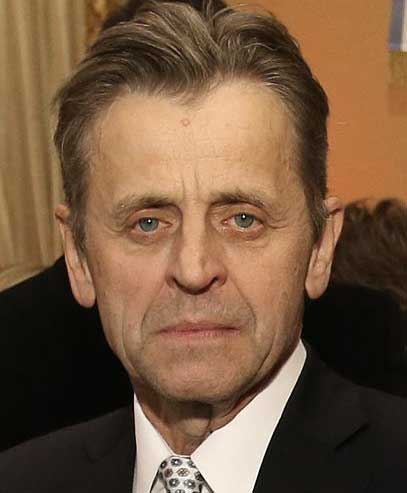 Mikhail Nikolayevich Baryshnikov (born January 27, 1948), nicknamed “Misha” (Russian diminutive of the name “Mikhail”), is a Latvian-born Russian-American dancer, choreographer, and actor. He is often cited alongside Vaslav Nijinsky, Rudolf Nureyev and Vladimir Vasiliev as one of the greatest male ballet dancers in history.

Born in Riga, Latvian SSR, Baryshnikov had a promising start in the Kirov Ballet in Leningrad before defecting to Canada in 1974 for more opportunities in Western dance. After dancing with American Ballet Theater, he joined the New York City Ballet as a principal dancer for one season to learn George Balanchine’s neoclassical Russian style of movement. He then returned with the American Ballet Theatre, where he later became artistic director. Baryshnikov has spearheaded many of his own artistic projects and has been associated in particular with promoting modern dance, premiering dozens of new works, including many of his own.[citation needed] His success as a dramatic actor on stage, cinema and television has helped him become probably the most widely recognized contemporary ballet dancer. Since his defection from the Soviet Union in 1974, Baryshnikov has never returned to Russia.

In 1977, he received a nomination for the Academy Award for Best Supporting Actor and a Golden Globe nomination for his work as “Yuri Kopeikine” in the film The Turning Point. He starred in the movie White Nights with Gregory Hines, Helen Mirren, and Isabella Rossellini, and had a significant role in the last season of the television series Sex and the City.

Mikhail Baryshnikov was born in Riga, then Latvian SSR, Soviet Union, now Latvia. His parents were Russians: Alexandra (a dressmaker; née Kiselyova) and Nikolay Baryshnikov (an engineer). According to Baryshnikov, his father was a strict, nationalist military man and his mother was the one who introduced him to the theater, opera and ballet. She committed suicide when he was 12.

Baryshnikov has a daughter, Aleksandra ‘Shura’ Baryshnikova (born March 5, 1981), from his relationship with actress Jessica Lange. When Baryshnikov and Lange met, he spoke very little English; they communicated in French instead. He eventually learned English by watching television. From 1982 to 1983 he dated Tuesday Weld, Lange’s best friend.

On July 3, 1986, Baryshnikov became a naturalized citizen of the United States. Asked if he feels like an American, he said, “I like to think like I’m a man of the world. I feel totally Parisian in Paris. Totally Parisian. I have my place here, a lot of close friends and collaborators here, whom I can really feel like I can talk serious business with them. Human business, not ‘business’ business. Paris was always the dream of my childhood. We grew up on French art, like all Russians. America, United States, North America – it’s a new country. Of course, if somebody would ask me to choose ‘either Paris or New York,’ I would choose New York. But spiritually, somehow, I love Europe.”

On April 27, 2017, Baryshnikov was granted citizenship by the Republic of Latvia for extraordinary merits. The application to the Latvian parliament along with a letter from Baryshnikov in which he expressed his wish to become a citizen of what today constitutes his native country was submitted on December 21, 2016. He stated that the decision was based on memories of his first 16 years living in Latvia, which provided the basis for the rest of his life. “It was there that my exposure to the arts led me to discover my future destiny as a performer. Riga still serves as a place where I find artistic inspiration,” Baryshnikov wrote in the letter to the Latvian parliament.

At the time there were tensions in Latvia with ethnic Russians like Baryshnikov whose father worked for the USSR military.