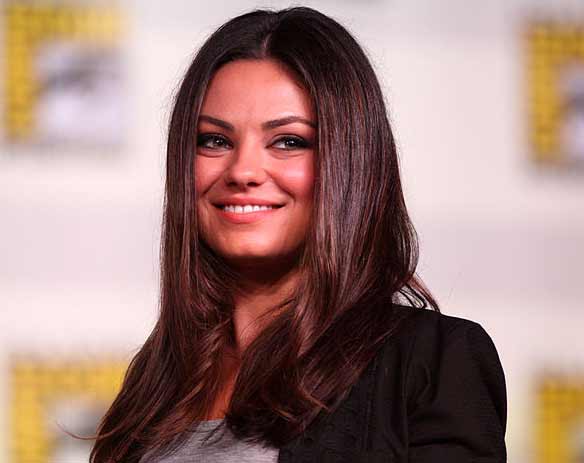 Milena Markovna “Mila” Kunis (/ˈmiːlə ˈkuːnɪs/; Ukrainian: Мілена Марківна Куніс; Russian: Милена Марковна Кунис; born August 14, 1983) is an American actress. In 1991, at the age of 7, she moved from Soviet Ukraine to the United States with her family. After being enrolled in acting classes as an after-school activity, she was soon discovered by an agent. She appeared in several television series and commercials, before landing her first significant role at age 14, playing Jackie Burkhart on the television series That ’70s Show (1998–2006). Since 1999, she has voiced Meg Griffin on the animated series Family Guy.

Kunis’s breakout film role came in 2008, playing Rachel in the romantic comedy Forgetting Sarah Marshall. She gained further critical acclaim and accolades for her performance in the psychological thriller Black Swan (2010), for which she received the Marcello Mastroianni Award for Best Young Actor or Actress, and nominations for the SAG Award and the Golden Globe Award for Best Supporting Actress. Her other major films include the action films Max Payne (2008) and The Book of Eli (2010), the romantic comedy Friends with Benefits (2011), the fantasy film Oz the Great and Powerful (2013) as the Wicked Witch of the West, and the comedies Ted (2012), Bad Moms (2016) and its sequel, A Bad Moms Christmas (2017).

Milena Markovna Kunis was born on August 14, 1983, in Chernivtsi, Ukrainian SSR in the Soviet Union. Her mother, Elvira, is a physics teacher who runs a pharmacy, and her father, Mark Kunis, is a mechanical engineer who works as a cab driver. Kunis has an elder brother, Michael. Her mother tongue and the common language within her family is Russian. She stated in 2011 that her parents had “amazing jobs”, and that she “was very lucky” and the family was “not poor”; they had decided to leave the USSR because they saw “no future” there for Mila and her brother. In 1991, when she was 7 years old, her family moved to Los Angeles, California, with $250. “That was all we were allowed to take with us. My parents had given up good jobs and degrees, which were not transferable. We arrived in New York on a Wednesday and by Friday morning my brother and I were at school in

Kunis comes from a Jewish family and has cited antisemitism in the former Soviet Union as one of several reasons for her family’s move to the United States. She has stated that her parents “raised [her] Jewish as much as they could”, although religion was suppressed in the Soviet Union. On her second day in Los Angeles, Kunis was enrolled at Rosewood Elementary School, not knowing a word of English. She later recalled: “I blocked out second grade completely. I have no recollection of it. I always talk to my mom and my grandma about it. It was because I cried every day. I didn’t understand the culture. I didn’t understand the people. I didn’t understand the language. My first sentence of my essay to get into college was like, ‘Imagine being blind and deaf at age seven.’ And that’s kind of what it felt like moving to the States.”

In Los Angeles, she attended Hubert Howe Bancroft Middle School. She used an on-set tutor for most of her high school years while filming That ’70s Show. She briefly attended Los Angeles Center for Enriched Studies (LACES), but when that school proved to be insufficiently flexible about her acting commitments, she transferred to Fairfax High School, from which she graduated in 2001. She briefly attended UCLA and Loyola Marymount University in Los Angeles.

On September 14, 2011, the FBI announced it was investigating the alleged hacking of Kunis’s cellphone and email accounts, along with those of other celebrities such as Scarlett Johansson and Vanessa Hudgens. Christopher Chaney from Jacksonville, Florida, later pleaded guilty in federal court to nine counts of computer hacking.

In November 2011, Kunis was escorted by Sgt. Scott Moore to the United States Marine Corps Ball in Greenville, North Carolina. Kunis had accepted Moore’s invitation in July after he posted it as a YouTube video while serving with the 3rd Battalion, 2nd Marine Regiment, in Afghanistan’s Helmand province. The event celebrated the Marine Corps’ 236th anniversary.

Kunis is a supporter of the Democratic Party and Barack Obama. In a 2012 interview, she criticized the Republican Party, saying: “The way that Republicans attack women is so offensive to me. And the way they talk about religion is offensive. I may not be a practicing Jew, but why we gotta talk about Jesus all the time?”

In January 2011, she revealed her struggle with chronic iritis that had caused temporary blindness in one eye. Some months earlier she had had surgery that corrected the problem. Kunis also has heterochromia iridium, a condition in which the irises are different colors. Her left eye is brown, while her right eye is green.

Kunis began dating actor Macaulay Culkin in 2002. During their relationship, there were rumors of the couple getting married, but Kunis denied them. In an interview with BlackBook magazine, Kunis stated that marriage is “not something that’s important to me”. Kunis said she tried her best to protect her and Culkin’s privacy, noting that “We don’t talk about it to the press. It’s already more high profile than I want it to be.” When asked if it was difficult to stay out of the tabloids and press, Kunis responded: “I keep my personal life as personal as I physically, mentally, possibly can.” Asked if that is difficult she said, “I don’t care. I will go to my grave trying. It is hard, but I’ll end up going to a bar that’s a hole in the wall. I won’t go to the ‘it’s-happening’ place.” On January 3, 2011, Kunis’ publicist confirmed reports that Kunis and Culkin had ended their relationship, saying, “The split was amicable, and they remain close friends.”

Kunis began dating her former That ’70s Show co-star Ashton Kutcher in April 2012. They became engaged in February 2014 and married during the first weekend of July 2015 in Oak Glen, California. The couple has two children: a daughter born in October 2014 and a son born in November 2016.