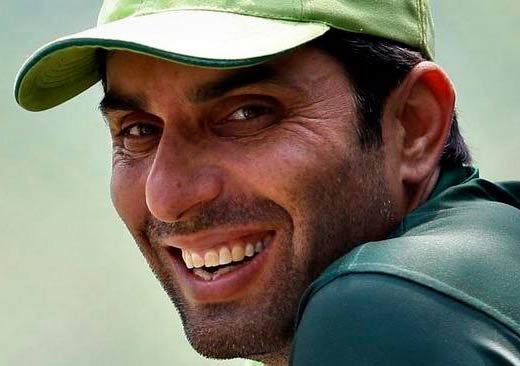 Misbah-ul-Haq Khan Niazi (Urdu: مصباح الحق‎) (born 28 May 1974) is a Pakistani cricket coach and former international cricketer who captained Pakistan in Test cricket and One Day Internationals (ODIs). He is the current head coach and chief selector of the Pakistan national team.

A late bloomer, Misbah was a middle-order batsman best known for his composure with the bat whilst also having the ability to be an aggressive big shot player when required. He scored the fastest fifty in Test cricket and set a new record for the fastest Test hundred and holds the record for most career ODI runs without a century.

Misbah has an MBA degree in Human Resource Management from the University of Management and Technology in Lahore, Punjab.

Misbah grew up in Mianwali in Pakistani Punjab. His father, Abdul Qudoos Niazi, was a school principal who died during Misbah’s childhood. Misbah is part of a non-Pashto speaking Pashtun Niazi family; the Pakistan cricketer and current Prime Minister of Pakistan Imran Khan is his distant cousin. During his early days, Misbah played tape ball cricket for his hometown, but his parents insisted on him securing a good education and he completed a BSc in Faisalabad. He then enrolled in the University of Management and Technology to pursue an MBA degree.

Misbah would eventually make his first-class debut in 1998, aged 24 for Sargodha. Misbah went on to be selected for the Pakistani Test side in 2001 and the ODI cricket team in 2002. Misbah married Uzma Khan in 2004. The couple have two children.

Although making his international debut back in 2001, his breakthrough came when was selected for ICC World T20. Misbah was influential in his prolific 2007 ICC World Twenty20 famously playing the Paddle Scoop in the Final against India in the final over as Pakistan lost by 5 runs. He was leading run scorer from Pakistan and third overall in the tournament. Also he was the first Pakistani player who reached No. 1 position in ICC T20I batsmen rankings. He was also the first Pakistani player to score a 50 in T20I. His knock of 66 against Australia was named as the fourth-best T20I batting performance of the year by ESPNCricinfo voters.[10] He was named in the ‘Team of the Tournament’ by Cricinfo for the 2007 T20I World Cup.

His knock of 161* against India at Bengaluru was named as the third-best Test Batting Performance of the year by ESPNCricinfo voters.

For his performances in 2007, he was named in the World T20I XI by Cricinfo.

Misbah was a member of the 2009 World T20 winning squad and was praised for his performance. Misbah played an influential role in getting Pakistan to the 2011 World Cup semifinals under Shahid Afridi’s captaincy. After the loss against India at Mohali, Misbah faced criticism from fans and experts for playing too many dot balls in crucial overs.

In 2013, Misbah was brilliant in terms of his batting. He moved to a career-best seventh place in the ICC rankings for ODI batsmen. Misbah was the leading run scorer in ODI cricket with 1373 runs for year 2013 ahead of Mohammad Hafeez and Virat Kohli. He also had 15 ODI half centuries, which is a record for most ODI half centuries in a calendar year, as well as hitting 3rd most ODI sixes that year.

Despite, Pakistan losing all 3 of their games, h was named as part of the ‘Team of the Tournament’ in the 2013 Champions Trophy by the ICC. He was also named as captain of the Team by Cricinfo.

In the first test at Abu Dhabi against South Africa, Pakistan amassed 442 runs, where Misbah scored his fourth test century, which was the second in the innings after Khurram Manzoor’s 146. In the second innings the Pakistani batting collapsed and were 7/3 with only needing a mere target of 40. When the two seniors of the team (Misbah and Younis Khan) came in to bat, Misbah hit two sixes off the bowling of Robin Peterson and hit the winning runs with a straight six.

In the second test at Dubai, Pakistan were all out for 99 in the first innings. After South Africa amassed a total of 517 with Graeme Smith hitting his 4th Test double and yet another century from the AB de Villiers, Pakistan were faltering for an embarrassing defeat. At 70/4 Misbah came in and blitzed the South African bowling attack with a 197 run stand with the Asad Shafiq repeating the same stand the two had in the first test, Misbah scored 88 before trying to obliterate the part-time spinner Dean Elgar over cow corner but edged it straight to Jacques Kallis. South Africa invited Pakistan to play South Africa at home, in their third bilateral series of the year.

The first ODI was hosted at Cape Town. South Africa were bundled out for 195, losing by 23 runs, and Pakistan taking the lead, 1–0. The 2nd ODI at Port Elizabeth was rain-affected, bringing it down to 45 overs per side. Pakistan won the game by 1 run, which also led them to a maiden series win against South Africa, that too at South Africa’s own home. Pakistan was also the first South Asian team to beat South Africa in a bilateral ODI series at home. In the third ODI, Ahmad Shehzad, Mohammad Hafeez, Shahid Afridi and Junaid Khan were all rested. Batting first once again, Pakistan scraped together a total of 179 all out, with Misbah remaining unbeaten on 79. Although the bowlers tried to keep Pakistan in the game, the target proved to be too low and South Africa won by 4 wickets. Pakistan took the series 2–1. This away win over the Proteas after being humiliated in Pakistan’s adopted home, the UAE, brought things back to normal in Pakistan cricket, with Misbah receiving praise from across the country.

In 2014, he made a test century off of 56 deliveries against Australia in Abu Dhabi, equaling the fastest one of that time by Viv Richards. In July 2016, Misbah scored a century against England at Lord’s and became the oldest cricketer in 82 years to score a test century. At the age of 42 years and 2 months, Misbah also became the oldest captain ever to score a test century. Misbah celebrated the landmark by saluting his team members and doing ten push-ups. He later explained during an interview that the celebration was meant as a tribute to the Military Boot Camp in Abbotabad where the team had attended an army style training session.