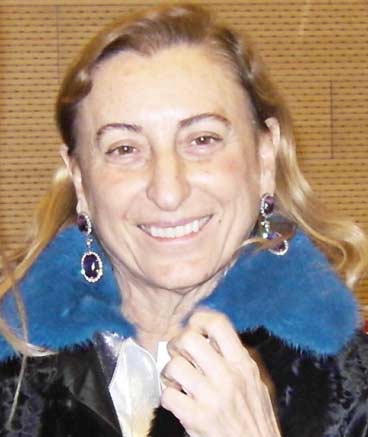 Miuccia Bianchi Prada (born Maria Bianchi on 10 May 1949) is an Italian billionaire fashion designer and businesswoman. She is the head designer of Prada and the founder of its subsidiary Miu Miu. As of March 2019, Forbes estimates her net worth at US$2.4 billion.

The youngest granddaughter of Mario Prada, she took over the family-owned luxury goods manufacturer in 1978. Since then, the company has acquired Jil Sander, Helmut Lang and shoemaker Church & Co. In 2002, Prada opened her own contemporary art gallery.

In March 2013, she was named one of the fifty best dressed over-50s by Forbes. The magazine listed her as the 75th most powerful woman in the world in 2014, when she had an estimated net worth of $11.1 billion.

Born Maria Bianchi on 10 May 1949 in Milan, she took the name Miuccia Prada in the 1980s, after being adopted by an aunt. Her biological parents were Luigi Bianchi and his wife, Luisa Prada. She has two older siblings, Albert and Marina. She attended Liceo Classico Berchet high school in Milan and graduated with a PhD in political science at the University of Milan.

She trained at the Teatro Piccolo to become a mime and performed for five years. She was a member of the Italian Communist Party and involved in the women’s rights movement during the seventies in Milan. In 1978 she entered into her family’s business of manufacturing luxury leather bags, a company established by her grandfather in 1913. Around the same time she met her future husband and business partner, Patrizio Bertelli.

Prada’s first successful handbag design was in 1985. It was a line of black, finely-woven nylon handbags. By 1989, she designed and introduced her first women’s ready-to-wear collection. In 1995 she launched her first menswear line. The Miu Miu line was introduced in 1992 as a less expensive womenswear line inspired by her personal wardrobe. She named it after her own nickname, Miu Miu.

In 1993 she was awarded the Council of Fashion Designers of America International Award. The following year she showed her collections in both New York and London fashion weeks. She had already been exhibiting at Milan fashion week. Bertelli, Prada’s husband, is responsible for the commercial side of products and Prada’s retail strategy. The design house has grown into a conglomerate that includes labels such as Helmut Lang, Jil Sander, and Azzedine Alaïa. The company has expanded into leather goods, shoes, fragrances, and apparel for both men and women.

She is now the co-CEO for Prada, together with her husband.

In 2010, she designed costumes for the Verdi opera “Attila” at the New York City Metropolitan Opera House.