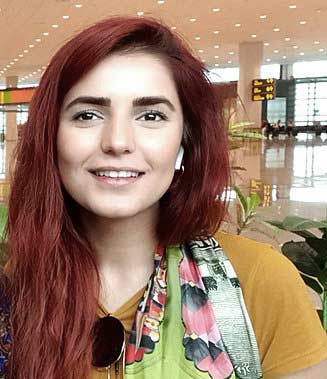 Momina Mustehsan (Urdu: مومنہ مستحسن‎; born 5 September 1992) is a Pakistani singer-songwriter, musician and social activist. In 2017, BBC named her one of the 100 most influential women, and the following year, Forbes featured her among its “30 Under 30” Asia list along with nine other Pakistani individuals. Mustehsan later sang the song “Awari” for the Indian thriller film Ek Villain (2014). In season 9, she performed a rendition of Nusrat Fateh Ali Khan’s “Afreen Afreen”, with Rahat Fateh Ali Khan and received critical appraisal. Mustehsan next releases, the singles, “Aaya Na Tu” (2018) and “Baari” (2019), topped the music charts in the country.

Alongside her singing career, Mustehsan participates in stage shows, is a prominent celebrity endorser for brands and products, and is active in humanitarian work. She promotes various causes such as education and mental health, and is particularly vocal about issues such as the role of women in Pakistan and feminism.

Mustehsan was born on 5 September 1992 in Quetta, Baluchistan, and was raised in Islamabad, though she also lived in New York, Paris, and Kiev while growing up. Her mother, Huma Mustehsan, is a doctor, and father, Kazim Mustehsan, is a retired brigadier from the Pakistan Army, and a recipient of Sitara-i-Imtiaz, the third highest honour and civilian award of the country. She has two siblings: an elder brother, Hashim Mustehsan, a doctor, and a younger brother, Haider Mustehsan, an interne at the Pakistan section of the United Nations. Born in Quetta and raised in Islamabad, Mustehsan earned a double majors degree in Biomedical Engineering and Applied Mathematics from the Stony Brook University.

Mustehsan completed her A’Level from Lahore Grammar School and later moved to the States for higher studies and graduated with a double majors degree in Biomedical Engineering and Applied Mathematics from the Stony Brook University in 2016. At the time of her graduation, her name was in the Dean’s list.

Mustehsan at first learnt to play violin and sang in public for the first time in a choir of her grade school, without any formal music training. Recalling, Mustehsan told that her teacher had asked her if she had something to show and had said, “I think you sing well”. She further told that she realized she had interest in music after when she had sung for the first time then. Her first encounter with the music came in 2004, when she recorded her first cover of Irish singer Damien Rice’s song “The Blower’s Daughter”. Despite having no background of musical training she was praised at that time.

At Junoon’s twentieth anniversary, Mustehsan recorded a song “Sajna” for their album Junoon 20 in Volume I, the song was written by Ali Azmat and was a bonus track on album. In 2012, she wrote the lyrics for the song “Pee Jaun”, and sung with Farhan Saeed. The song was also featured in 2015 Nescafé Basement with Mustehsan singing along with Hamza Tanveer.

In 2014, she recorded a song “Awari” for Pakistani band Soch who approached her, without telling her that they are going to use the song in Indian film Ek Villain, she explained, “I was approached by Soch and they wanted me to feature on their track without disclosing what it was for,” she recorded the song in her university dorm, “It was an extremely casual process and I never met anyone in person. I recorded the song on my own in New York. The contract was signed after the track had been lined up for release.” On her future ventures she said, “I’m always working on new pieces. Music is a passion for me and not a profession. I have plenty of time on my hands… I might be working on a Pakistani project later this year. It’s something that I am excited about.”

In 2016, Mustehsan recorded her first song “Zindagi Kitni Haseen Hay” for the romantic drama film Zindagi Kitni Haseen Hay, and marked her Coke Studio debut as a featured artist in season 9 later that year. Her first song “Afreen Afreen”, alongside Rahat Fateh Ali Khan, broke all previous Coke Studio records by accumulating over 2.5 million views in one day. The other songs she performed “Main Raasta”, partially written by her, and “Tera Woh Pyar (Nawazishein Karam)” along with Junaid Khan and Asim Azhar respectively. Commenting on her Coke Studio success she said, “it was very overwhelming for me because these are classics I am singing with very well-known singers. For me it was a great honour. I was also very nervous – I never get nervous for anything. But I got appreciated a lot once the songs were recorded.”

Revealing on her future in music Mustehsan said “I don’t want to pursue music as a career. For me, it was hard to make a decision since I had no references. Maybe after me, people would come out to show their talent,” and explained “I don’t think releasing number of albums defines a musician. I do music for myself and not for the masses. I’m not into the idea of being a celebrity or having people know or follow me.”

In February 2017, she released the anthem for the Pakistan Super League franchise Islamabad United. Leading media outlets, The Express Tribune and Geo News criticized the heavy use of auto-tune and the lack of substance in the single, titled “Cricket Jorrey Pakistan” (Cricket Unites Pakistan). On 3 November, “Afreen Afreen” became the fastest Pakistani origin video to mark 100 million views on YouTube, and become the most viewed Pakistani origin YouTube video on 10 November, leaving behind Atif Aslam’s rendition of “Tajdar-e-Haram” and Imran Khan’s “Amplifier”. That same year, she collaborated with the Coke Studio for a second time, and released three songs, one of which was the “Qaumi Taranah” (national anthem of Pakistan). which she sang with the other featured artists of the season. Released on 14 August, critics criticized the rendition, saying that it failed to “win hearts”. Her next song released was “Muntazir”, which was composed and written by Strings. Featured alongside the debutante Danyal Zafar, the song received positive reviews, and became one of the most viewed song of the season. The Sufi rock “Ghoom Taana” was her final song, released in the season, and also featured the band Irteassh. Both the original and the recreated versions were written and composed by Salman Ahmad, and the song was originally released in 2003 by the band Junoon in their album Door. The song received mixed to positive reviews from the critics upon release, but Mustehsan and Irteassh were praised for their versatility in the song.

Mustehsan began 2018 with the single “Aaya Na Tu”, which she sang with the Indian singer Arjun Kanungo. Composed by Kanungo, and written by Kunaal Vermaa, the single was released under the label of Universal Music India. The single was shot in Bangkok, and Mustehsan said that the song addresses “rejection, pain and the burden of true love”. Upon release, the song topped the Hindi and Urdu music charts, trended at number five on YouTube several hours later, and has garnered more than 70 million views since its release on YouTube.

In 2019, Mustehsan collaborated with Bilal Saeed for the song “Baari”, written and composed by Saeed from the platform of OneTwoRecords. The song received positive receive, and gained more than 17 million views with a week of its release.

In September 2016, Mustehsan confirmed and announced her engagement on Twitter to Ali Naqvi, a US based banker in California. However, their relation ended in early 2017.

Mustehsan supports several charitable causes and organizations, that works for the welfare of women in Pakistan. She often speaks out on in support of education for girls, and is particularly vocal about issues, such as women’s rights and gender equality. Mustehsan has also been outspoken about mental illness and depression, and in 2017, she spoke about her personal experience of overcoming depression. In response to the family separation policy by the U.S President Donald Trump, Mustehsan wrote on Twitter: “Separating children from their families is traumatic and makes them more vulnerable in every way. This is inhuman. Children are children first, their immigration status shouldn’t rip them away from their families.”

In an online interview, Mustehsan stated that she had donated all of her earnings of 2016 to make water-wells in the Thar desert of Sindh. Mustehsan is planning a distant education program for children in rural Pakistan along with a polio campaign. In a chat show, she said, “I plan introducing distant education plans for children in rural areas where there are no schools or a learning environment. We’ll introduce learning videos which, along with projectors, would be provided to the mosques in different areas to enable children to learn. From making roties [bread] to learning physics, they’ll get it all.” In 2017, Mustehsan was a part of the United Nations Women “Beat Me” campaign, that aimed to address the issue of domestic violence in the country. During the campaign, Mustehsan talked about feminism in Pakistan, and said:

“Do we hate our women? I don’t think so. In fact, Pakistan has more women representation in government than the U.S., and we have twice elected a female head of state. Empowering women in Pakistan would mean raising them equal to boys, providing them the same education, giving them the same job opportunities, equal wages and equal respect.”
In May 2018, Mustehsan (along with Sajal Aly, Ahad Raza Mir, Ali Rehman Khan, Sonya Hussain, Younis Khan, Ali Sethi and Gul Panra), appeared in the Coca-Cola advertisement. The purpose of the advertisement was to collect funds for Edhi Foundation, a non-profit welfare organization, under the “Eidi for Edhi” campaign. In addition to appearing, she also recited a part of the poem “Lab Pe Aati Hai Dua”, in the Sindhi language for the advertisement. Later in the country’s first ever live digital donation drive event, Mustehsan donated ₨1 million (US$6,000) to the foundation. That same month, Mustehsan lend her support to the “Taleem Do” initiative, a non-profit right to education program, based in Tharparkar.