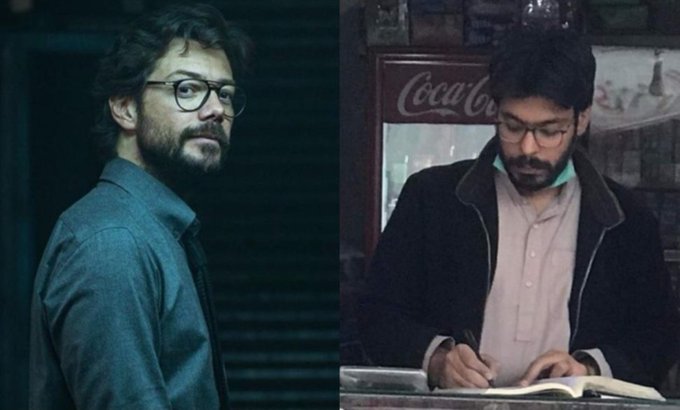 A character from MoneyHeister, known to fans as the series’ professor, has been spotted in Pakistan working in a drugstore.

In the last few days, if you have visited any of the social media websites, you must have noticed the casa de papel or any meme of MoneyHist or any post or poster or any fan analysis.

If you are unfamiliar with the series, your use of social media may be a bit less because the name ‘MoneyHist’ is definitely mentioned in every other post and now a character of this series whom the fans of this series’ Professor A similar form has been found in Pakistan which is seen working in a drug store.

The photo has gone viral on social media and fans seem to be enjoying it. A user named Osama Rajput shared a picture on Twitter in which ‘Professor’ and his Pakistani counterpart appear together and he wrote in his tweet that ‘Professor’s counterpart was found in Pakistan’.

Another user wrote in his tweet: ‘Professor’s Pakistani connection’ and about the medicine in the picture, he said that the professor was working on his next height, in response to which a user named Raja Artist wrote that ‘Johnny is a panadol Do i

A user named Malaika says in her tweet ‘La Casa do patte desprin’ which is also the Spanish name of the same series.

Interestingly, the show’s character ‘Professor’ contacted Pakistan in the show and a user was seen referring to it and wrote that ‘whenever professors get in trouble, they ask to contact Pakistan.’

MoneyHeast was trending on Twitter before this season and its popularity increased after its launch on Netflix.