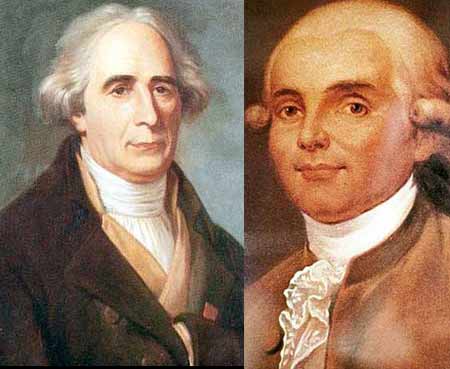 Joseph-Michel was the 12th child and was described as a maverick and dreamer (“a typical inventor’s temperament”) and was impractical in terms of business and personal affairs. Étienne was the 15th child, had a much more even and businesslike temperament and was sent to Paris to train as an architect. After the sudden and unexpected death of Raymond in 1772, he was recalled to Annonay to run the family business. In the subsequent 10 years, Étienne applied his talent for technical innovation to the family business of paper making, which then as now was a high-tech industry. He succeeded in incorporating the latest Dutch innovations of the day into the family mills.

Of the two brothers, it was Joseph who was first interested in aeronautics; as early as 1775 he built parachutes, and once jumped from the family house. He first contemplated building machines when he observed laundry drying over a fire incidentally form pockets that billowed upwards. Joseph made his first definitive experiments in November 1782 while living in Avignon. He reported some years later that he was watching a fire one evening while contemplating one of the great military issues of the day—an assault on the fortress of Gibraltar, which had proved impregnable from both sea and land. Joseph mused on the possibility of an air assault using troops lifted by the same force that was lifting the embers from the fire. He believed that the smoke itself was the buoyant part and contained within it a special gas, which he called “Montgolfier Gas”, with a special property he called levity, which is why he preferred smoldering fuel.

Joseph then built a box-like chamber 1×1×1.3 m (3 ft by 3 ft (0.91 m) by 4 ft) out of very thin wood, and covered the sides and top with lightweight taffeta cloth. He crumpled and lit some paper under the bottom of the box. The contraption quickly lifted off its stand and collided with the ceiling.

Joseph recruited his brother to balloon building by writing, “Get in a supply of taffeta and of cordage, quickly, and you will see one of the most astonishing sights in the world.” The two brothers built a similar device, scaled up by three (so 27 times greater in volume). On 14 December 1782 they did their very first test flight, lighting with wool and hay, and the lifting force was so great, that they lost control of their craft. The device floated nearly two kilometers (about 1.2 mi) and was destroyed after landing by the “indiscretion” of passersby.

Both brothers invented a process to manufacture transparent paper looking like vellum, reproducing the technique of the English, followed by the papermakers Johannot and Réveillon. In 1796, Joseph Michel Montgolfier invented the first self-acting hydraulic ram, a water pump to raise water for his paper mill at Voiron. In 1772, the British clockmaker John Whitehurst had invented its precursor, the “pulsation engine”. In 1797, Montgolfier’s friend Matthew Boulton took out a British patent on his behalf.

In 1816, Joseph Michel’s sons obtained a British patent for an improved version of the pump.

Both brothers were freemasons in Les Neuf Soeurs lodge in Paris.

In 1799, Etienne de Montgolfier died on the way from Lyon to Annonay. His son-in-law, Barthélémy Barou de la Lombardière de Canson (1774–1859), succeeded him as the head of the company, thanks to his marriage with Alexandrine de Montgolfier. The company became “Montgolfier et Canson” in 1801, then “Canson-Montgolfier” in 1807. In 1810, Joseph-Michel died in Balaruc-les-Bains.

In 1983, the Montgolfier brothers were inducted into the International Air & Space Hall of Fame at the San Diego Air & Space Museum.