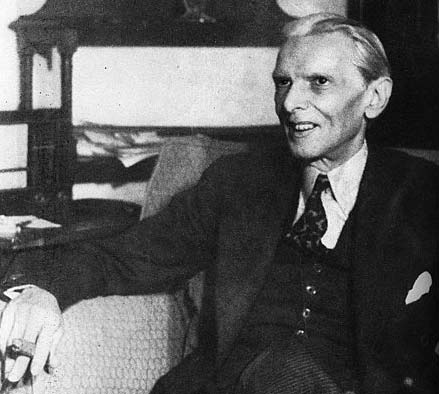 Muhammad Ali Jinnah (born Mahomedali Jinnahbhai; 25 December 1876 – 11 September 1948) was a barrister, politician and the founder of Pakistan. Jinnah served as the leader of the All-India Muslim League from 1913 until Pakistan’s creation on 14 August 1947, and then as Pakistan’s first Governor-General until his death. He is revered in Pakistan as Quaid-i-Azam (“Great Leader”) and Baba-i-Qaum, (“Father of the Nation”). His birthday is a national holiday in Pakistan.

Born at Wazir Mansion in Karachi, Jinnah was trained as a barrister at Lincoln’s Inn in London. Upon his return to British India, he enrolled at the Bombay High Court, and took an interest in national politics, which eventually replaced his legal practice. Jinnah rose to prominence in the Indian National Congress in the first two decades of the 20th century. In these early years of his political career, Jinnah advocated Hindu–Muslim unity, helping to shape the 1916 Lucknow Pact between the Congress and the All-India Muslim League, in which Jinnah had also become prominent. Jinnah became a key leader in the All India Home Rule League, and proposed a fourteen-point constitutional reform plan to safeguard the political rights of Muslims. In 1920, however, Jinnah resigned from the Congress when it agreed to follow a campaign of satyagraha, which he regarded as political anarchy.

By 1940, Jinnah had come to believe that Muslims of the Indian subcontinent should have their own state. In that year, the Muslim League, led by Jinnah, passed the Lahore Resolution, demanding a separate nation. During the Second World War, the League gained strength while leaders of the Congress were imprisoned, and in the elections held shortly after the war, it won most of the seats reserved for Muslims. Ultimately, the Congress and the Muslim League could not reach a power-sharing formula for the subcontinent to be united as a single state, leading all parties to agree to the independence of a predominantly Hindu India, and for a Muslim-majority state of Pakistan.

As the first Governor-General of Pakistan, Jinnah worked to establish the new nation’s government and policies, and to aid the millions of Muslim migrants who had emigrated from the new nation of India to Pakistan after independence, personally supervising the establishment of refugee camps. Jinnah died at age 71 in September 1948, just over a year after Pakistan gained independence from the United Kingdom. He left a deep and respected legacy in Pakistan. Innumerable streets, roads and localities in the world are named after Jinnah. Several universities and public buildings in Pakistan bear Jinnah’s name. According to his biographer, Stanley Wolpert, he remains Pakistan’s greatest leader.

Jinnah’s given name at birth was Mahomedali Jinnahbhai, and he likely was born in 1876, to Jinnahbhai Poonja and his wife Mithibai, in a rented apartment on the second floor of Wazir Mansion near Karachi, now in Sindh, Pakistan but then within the Bombay Presidency of British India. Jinnah’s family was from a Gujarati Khoja Shi’a Muslim background, though Jinnah later followed the Twelver Shi’a teachings. After his death, his relatives and other witnesses claimed that he had converted in later life to the Sunni sect. His religion at the time of his death was disputed in multiple court cases. Jinnah was from a wealthy merchant background, his father was a merchant and was born to a family of textile weavers in the village of Paneli in the princely state of Gondal (Kathiawar, Gujarat); his mother was also of that village. They had moved to Karachi in 1875, having married before their departure. Karachi was then enjoying an economic boom: the opening of the Suez Canal in 1869 meant it was 200 nautical miles closer to Europe for shipping than Bombay. Jinnah was the second child; he had three brothers and three sisters, including his younger sister Fatima Jinnah. The parents were native Gujarati speakers, and the children also came to speak Kutchi and English. Jinnah was not fluent in Gujarati, his mother-tongue, nor in Urdu; he was more fluent in English. Except for Fatima, little is known of his siblings, where they settled or if they met with their brother as he advanced in his legal and political careers.

As a boy, Jinnah lived for a time in Bombay with an aunt and may have attended the Gokal Das Tej Primary School there, later on studying at the Cathedral and John Connon School. In Karachi, he attended the Sindh-Madrasa-tul-Islam and the Christian Missionary Society High School. He gained his matriculation from Bombay University at the high school. In his later years and especially after his death, a large number of stories about the boyhood of Pakistan’s founder were circulated: that he spent all his spare time at the police court, listening to the proceedings, and that he studied his books by the glow of street lights for lack of other illumination. His official biographer, Hector Bolitho, writing in 1954, interviewed surviving boyhood associates, and obtained a tale that the young Jinnah discouraged other children from playing marbles in the dust, urging them to rise up, keep their hands and clothes clean, and play cricket instead.

From the 1930s, Jinnah suffered from tuberculosis; only his sister and a few others close to him were aware of his condition. Jinnah believed public knowledge of his lung ailments would hurt him politically. In a 1938 letter, he wrote to a supporter that “you must have read in the papers how during my tours … I suffered, which was not because there was anything wrong with me, but the irregularities [of the schedule] and over-strain told upon my health”. Many years later, Mountbatten stated that if he had known Jinnah was so physically ill, he would have stalled, hoping Jinnah’s death would avert partition. Fatima Jinnah later wrote, “even in his hour of triumph, the Quaid-e-Azam was gravely ill … He worked in a frenzy to consolidate Pakistan. And, of course, he totally neglected his health …” Jinnah worked with a tin of Craven “A” cigarettes at his desk, of which he had smoked 50 or more a day for the previous 30 years, as well as a box of Cuban cigars. As his health got worse, he took longer and longer rest breaks in the private wing of Government House in Karachi, where only he, Fatima and the servants were allowed.

In June 1948, he and Fatima flew to Quetta, in the mountains of Balochistan, where the weather was cooler than in Karachi. He could not completely rest there, addressing the officers at the Command and Staff College saying, “you, along with the other Forces of Pakistan, are the custodians of the life, property and honour of the people of Pakistan.” He returned to Karachi for 1 July opening ceremony for the State Bank of Pakistan, at which he spoke. A reception by the Canadian trade commissioner that evening in honour of Dominion Day was the last public event he attended.

On 6 July 1948, Jinnah returned to Quetta, but at the advice of doctors, soon journeyed to an even higher retreat at Ziarat. Jinnah had always been reluctant to undergo medical treatment, but realising his condition was getting worse, the Pakistani government sent the best doctors it could find to treat him. Tests confirmed tuberculosis, and also showed evidence of advanced lung cancer. He was treated with the new “miracle drug” of streptomycin, but it did not help. Jinnah’s condition continued to deteriorate despite the Eid prayers of his people. He was moved to the lower altitude of Quetta on 13 August, the eve of Independence Day, for which a ghost-written statement for him was released. Despite an increase in appetite (he then weighed just over 36 kilograms or 79 pounds), it was clear to his doctors that if he was to return to Karachi in life, he would have to do so very soon. Jinnah, however, was reluctant to go, not wishing his aides to see him as an invalid on a stretcher.

By 9 September, Jinnah had also developed pneumonia. Doctors urged him to return to Karachi, where he could receive better care, and with his agreement, he was flown there on the morning of 11 September. Dr. Ilahi Bux, his personal physician, believed that Jinnah’s change of mind was caused by foreknowledge of death. The plane landed at Karachi that afternoon, to be met by Jinnah’s limousine, and an ambulance into which Jinnah’s stretcher was placed. The ambulance broke down on the road into town, and the Governor-General and those with him waited for another to arrive; he could not be placed in the car as he could not sit up. They waited by the roadside in oppressive heat as trucks and buses passed by, unsuitable for transporting the dying man and with their occupants not knowing of Jinnah’s presence. After an hour, the replacement ambulance came, and transported Jinnah to Government House, arriving there over two hours after the landing. Jinnah died later that night at 10:20 pm at his home in Karachi on 11 September 1948 at the age of 71, just over a year after Pakistan’s creation.

Indian Prime Minister Jawaharlal Nehru stated upon Jinnah’s death, “How shall we judge him? I have been very angry with him often during the past years. But now there is no bitterness in my thought of him, only a great sadness for all that has been … he succeeded in his quest and gained his objective, but at what a cost and with what a difference from what he had imagined.” Jinnah was buried on 12 September 1948 amid official mourning in both India and Pakistan; a million people gathered for his funeral. Indian Governor-General Rajagopalachari cancelled an official reception that day in honour of the late leader. Today, Jinnah rests in a large marble mausoleum, Mazar-e-Quaid, in Karachi.