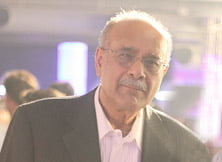 Najam Aziz Sethi (Punjabi: نجم سیٹھی; born c. 20 May 1948) is a Pakistani journalist, businessman, YouTuber, and former marxist who is founder of The Friday Times and Vanguard Books. Previously, as an administrator, he served as Chairman of Pakistan Cricket Board, caretaker Federal Minister of Pakistan and Chief Minister of Punjab, Pakistan.

As a journalist, he is a left-leaning political commentator who serves as the editor-in-chief of The Friday Times and serves as Chairman of Pakistan Super League. He has also served as the caretaker chief minister of Punjab during the 2013 election. He formerly used to host primetime current affairs show Aapas ki Baat on Geo News. He is currently the President of AAP Media Media Network / Indus News.

Najam Sethi began his sociopolitical endeavours with the socialist movement working for the rights of Baluchistan, leading to his arrest in 1975 before being discharged in 1978. He consequently left politics and established Vanguard Books, a progressive book publishing company.

In 1989, Sethi along with his wife Jugnu Mohsin launched an independent English weekly, The Friday Times. He was arrested by the second Nawaz Sharif government in 1999 on trumped-up charges of treason before being released by the Supreme Court of Pakistan. In 2002, he founded the Daily Times of Pakistan and became its editor until leaving in October 2009. He also served as the Pakistan correspondent of The Economist from 1990 to 2008.

Sethi won the 1999 International Press Freedom Award of the US-based Committee to Protect Journalists and the 2009 World Association of Newspapers’ Golden Pen of Freedom Award. On 26 March 2013, his name was approved for the interim position of the chief minister of Punjab as a result of consensus between members of the selection committee comprising individuals from both the governing and the opposing political parties. He took the oath on 27 March 2013, and left the office after the May 2013 elections on 6 June 2013.