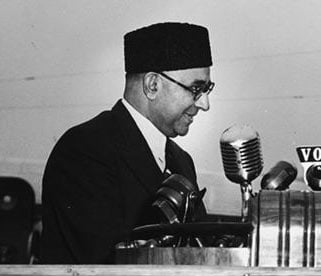 Cause of Death: Gunshot wound

Nawabzada Liaquat Ali Khan (Urdu: لِیاقت علی خان‎ ; 1 October 1895 – 16 October 1951), widely known as Quaid-e-Millat (Leader of the Nation) and Shaheed-e-Millat (Urdu: شہِیدِ مِلّت‎ Martyr of the Nation), was a Pakistani politician who was one of the leading founding fathers of Pakistan. A statesman, lawyer, and political theorist , hew became the first Prime Minister of Pakistan; he also held cabinet portfolio as the first foreign, defence, and the frontier regions minister from 1947 until his assassination in 1951. Prior to the partition, Khan briefly tenured as the first finance minister in the interim government led by its Governor General Mountbatten.

He was born in Karnal, then in the Punjab Province of British India on 1 October 1895. Liaquat Ali Khan was educated at the Aligarh Muslim University in India, and then at Oxford University in the United Kingdom.[citation needed] Well-educated, he was a democratic political theorist who promoted parliamentarism in India. After first being invited by the Congress Party, he opted for the Muslim League led by influential Mohammad Ali Jinnah who was advocating the eradication of the injustices and ill-treatment meted out to Indian Muslims by the British government. He pursued his role in the independence movements of India and Pakistan, while serving as the first Finance Minister in the interim government of British Indian Empire, prior to the independence and partition of India and Pakistan in 1947. Ali Khan assisted Jinnah in campaigning for the creation of a separate state for Indian Muslims.

Ali Khan’s credentials secured him the appointment of Pakistan’s first Prime Minister, Ali Khan’s foreign policy sided with the United States and the West, though his foreign policy was determined to be a part of the Non Aligned Movement. Facing internal political unrest, his government survived an attempted coup by nationalists, leftists and communists spearheaded by segments of the army. Nonetheless, his influence grew further after Jinnah’s death, and he was responsible for promulgating the Objectives Resolution. In 1951, at a political rally in Rawalpindi, Ali Khan was assassinated by a hired assassin, Said Babrak.

Muhammad Liaquat Ali Khan was born at Karnal, then in the Punjab Province of British India, on 1 October 1895. Despite being “courteous, affable and socially popular” and coming from an aristocratic family known for its philanthropy, his biographer Muhammad Reza Kazimi notes that little is known of his early life and that which is has to be pieced together from snippets of mostly hagiographic writings. The family claimed a Persian origin, although this is probably no more than legend, and was settled in Karnal by the time of his grandfather, Nawab Ahmad Ali Khan. They had adopted the Urdu language, and Liaquat was thus a native Urdu speaker.

According to his family, Nawab Ahmad Ali Khan gained sufficient prestige that the British East India Company recognised him with titles such as Rukun-al-Daulah, Shamsher Jang and Nawab Bahadur, which they say were later inherited by his sons. The validity of those titles has been questioned because the family estates in Karnal were diminished as a result of the Indian Rebellion of 1857, after which Karnal itself ceased to be an autonomous area.

His family had deep respect for the Indian Muslim thinker and philosopher Syed Ahmad Khan, and his father had a desire for the young Liaqat Ali Khan to be educated in the British educational system; therefore, his family sent Ali Khan to the famous Aligarh Muslim University (AMU), where he obtained degrees in law and political science.

In 1913, Ali Khan attended the Muhammadan Anglo-Oriental College (now Aligarh Muslim University), graduating with a BSc degree in Political science and LLB in 1918, and married his cousin, Jehangira Begum, also in 1918, however the couple later separated. After the death of his father in 1919, Ali Khan, with British Government awarding the grants and scholarship, went to England, attending Oxford University’s Exeter College to pursue his higher education. In 1921, Ali Khan was awarded the Master of Law in Law and Justice, by the college faculty who also conferred on him a Bronze Medallion. While a graduate student at Oxford, Ali Khan actively participated in student unions and was elected Honorary Treasurer of the Majlis Society— a student union founded by Indian Muslim students to promote the Indian students’ rights at the university.[citation needed] He was called to the Bar at the Inner Temple of London in 1922 but never practised.

He is Pakistan’s longest serving Prime Minister spending 1,524 days in power, a record which has stood for 63 years to the present. His legacy was built up as a man who was the “martyr for democracy in the newly founded country. Many in Pakistan saw him as a man who sacrificed his life to preserve the parliamentary system of government. After his death, his wife remained an influential figure in the Pakistani foreign service, and was also the Governor of Sindh Province in the 1970s. Liaquat Ali Khan’s assassination remains an unsolved mystery, and all traces leading to the conspirator were removed. Popularly, he is known as Quaid-i-Millat (Leader of the Nation) and Shaheed-i-Millat (Martyr of Nation), by his supporters. His assassination was a first political murder of any civilian leader in Pakistan, and Liaqat Ali Khan is remembered fondly by most Pakistanis. In an editorial written by Daily Jang, the media summed up that “his name will remain shining forever on the horizon of Pakistan”.

In Pakistan, Liaquat Ali Khan is regarded as Jinnah’s “right hand man” and heir apparent, though Jinnah once had said. His role in filling in the vacuum created by Jinnah’s death is seen as decisive in tackling critical problems during Pakistan’s fledgling years and in devising measures for the consolidation of Pakistan. After his death, the government of Pakistan released a commemorative stamp and his face is printed on postage stamps across the country.

Liaquat Ali Khan’s former personal residence is located at Jansath Tehsil of Muzaffarnagar, Uttar Pradesh about 80 km from his ancestral estate and is now being considered by the Uttar Pradesh government to be opened as a tourist destination. His family had strong ties with the British Government.