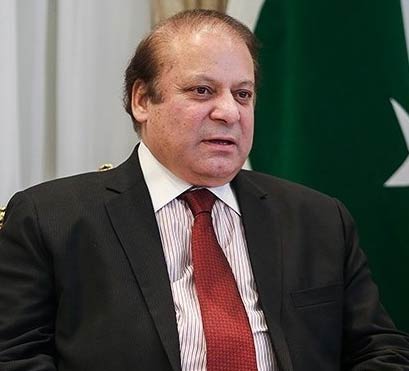 Born into the upper-middle class Sharif family in Lahore, Sharif is the son of Muhammad Sharif, the founder of Ittefaq and Sharif Group. He is the elder brother of Shehbaz Sharif, who also served as the chief minister of Punjab. According to the Election Commission of Pakistan, Sharif is the one of the wealthiest men in Pakistan, with an estimated net worth of at least 1.6 billion Pakistani rupees. Most of Sharif’s wealth originates from his businesses in steel construction.

Before entering politics in the 1970s, Sharif studied business at Government College and law at the University of Punjab. In 1981, Sharif was appointed by President Zia as the minister of finance for the province of Punjab. Backed by a loose coalition of conservatives, Sharif was elected as the Chief Minister of Punjab in 1985 and re-elected after the end of martial law in 1988. In 1990, Sharif led the conservative Islamic Democratic Alliance and became the 12th prime minister of Pakistan.

After being ousted in 1993, when president Ghulam Ishaq Khan dissolved the National Assembly, Sharif served as the leader of the opposition to the government of Benazir Bhutto from 1993 to 1996. He returned to premiership after the Pakistan Muslim League (N) (PML-N) was elected in 1997, and served until his removal in 1999 by military takeover and was tried in plane hyjecking case which was argued by Barrister Ijaz Hussain Batalvi assisted by Khawaja Sultan senior Advocate, Sher Afghan Asdi and Akhtar Aly Kureshy Advocate. After prison and exile for more than a decade, he returned to politics in 2011 and led his party to victory for a third time in 2013.

In 2017, Sharif was removed from office by the Supreme Court of Pakistan regarding revelations from the Panama Papers case. In 2018, the Pakistani Supreme Court disqualified Sharif from holding public office, and he was sentenced to ten years in prison.

Sharif was born in Lahore, Punjab, on 25 December 1949. The Sharif family are Kashmiris of Punjab. His father, Muhammad Sharif, was an upper-middle-class businessman and industrialist whose family had emigrated from Anantnag in Kashmir for business. They settled in the village of Jati Umra in Amritsar district, Punjab, at the beginning of the twentieth century. His mother’s family came from Pulwama. After the creation of Pakistan in 1947, Sharif’s parents migrated from Amritsar to Lahore. His father followed the teachings of the Ahl-i Hadith. His family owns Ittefaq Group, a multimillion-dollar steel conglomerate, and Sharif Group, a conglomerate with holdings in agriculture, transport and sugar mills.

Sharif married Kalsoom Nawaz Sharif, who was also of Kashmiri descent. His brother Shehbaz Sharif served as Chief Minister of Punjab province four times and currently is leader of opposition in National Assembly of Pakistan, while his nephew Hamza Shahbaz Sharif is currently Leader of the Opposition in the Provincial Assembly of the Punjab. Sharif’s daughter Maryam Nawaz, also actively participates in politics. Maryam is married to politician Muhammad Safdar Awan. His other daughter, Asma Nawaz, is married to Ali Dar, son of Ishaq Dar, the current finance minister of Pakistan. The personal residence of the Sharif family, Raiwind Palace, is located in Jati Umra, Raiwind, on the outskirts of Lahore. He also has a residence in Jeddah, Saudi Arabia, known as the Sharif Villa, where he lived during his years in exile. His elder son, Hussain Nawaz, is a businessman based in Saudi Arabia and currently resides in the Jeddah house. His younger son, Hassan Nawaz, is also a businessman and lives in London.

Sharif went to Saint Anthony High School. He graduated from the Government College University (GCU) with an art and business degree and then received a law degree from the Law College of Punjab University in Lahore.

Sharif underwent heart surgery in May 2016 in London. It was his second open-heart operation. His deteriorating health forced him to undergo an open heart surgery only three days before the presentation of the country’s annual budget. Many opposition leaders and the legal fraternity, including former Chief Justice Iftikhar Muhammad Chaudhry, raised questions about a possible constitutional crisis in Pakistan. Chaudhry called for electing a new interim prime minister to avoid the crisis.

Jon Boone wrote in The Guardian in 2013, that following his attempts to enact Sharia Law in the late 1990s, Sharif had adopted a more centrist position by seeking diplomatic and trade relations with India which encouraged support from left-leaning Pakistanis. In another column, The Guardian described Sharif’s first two terms in the 1990s as authoritarian and clouded by allegations of corruption, but that “old foes and longstanding friends say Sharif is a changed man” from when he originally entered politics “to defend family [business] interests”.

Tim Craig, writing in March 2016 for The Washington Post, described Sharif’s move away from social conservatism as “traced to Sharif’s ambitious economic agenda, the influence his 42-year-old daughter has over him, and his awareness that Pakistan remains the butt of jokes”. Afrasiab Khattak summarized the shift by stating “[Sharif] knows extremism is not good for business”. Sharif’s advisor Miftah Ismail described him as “a very religious guy”, adding however “he is perfectly okay with other people not being religious”. Writing for The Express Tribune in 2016, Fahd Hussain stated that Sharif will likely will face “blowback from its natural allies among the clergy”, adding that with “the bulk of the Punjab conservative voter[s] [remaining] in the Sharif camp”, that Sharif is eyeing the “liberal, progressive, left-of-centre voters”.

Leftist Senator Raza Rabbani claimed that Sharif “has always had these rightwing leanings”, adding that “the temptation was there in the past to appease his rightwing Islamist constituency”. Mushahid Hussain Syed, a former member of Sharif’s cabinet, described Sharif’s religious leanings: “he is quite a good Muslim in terms of belief and basic rituals like prayer and going to Mecca” adding however, “in cultural terms he is quite relaxed. He likes music and movies and has a good sense of humour. He is not your average type of serious, sulking fundo.” Mohammed Hanif, writing in 2013, claimed that “if Sharif wasn’t from the dominant province Punjab, where most of the army elite comes from, if he didn’t represent the trading and business classes of Punjab, he would still be begging forgiveness for his sins in Saudi”.

Author Edward A. Gargan, writing in November 1991, described Sharif’s government as “bedeviled by gossip, barraged by accusations of venality, castigated by the opposition and threatened by a final rupture of cordiality with the United States”. The same year Najam Sethi described Sharif’s government as “corrupt, absolutely, astronomically corrupt, including the prime minister”. In 2009, The New York Times wrote that “Bhutto and her Pakistan Peoples Party were considered more amenable allies for Washington” adding that “more nationalistic and religiously oriented, [Sharif] and his party, the Pakistan Muslim League-N, have traditionally found common cause with the religious parties”. Pervez Hoodbhoy described Sharif as “a reflection of Pakistani society” adding that “he is silent on what matters most: the insurgency. What we need is a leader.” Celia W. Dugger, writing in 1999, described Sharif’s Raiwind Palace as “walls paneled in silken fabrics and rococo chairs laden with so much gold leaf they looked like they belonged in the court of Louis XIV or a bordello”, drawing comparison between Sharif’s lifestyle and that of the “Mughals”.