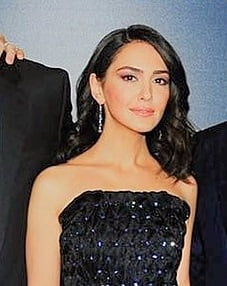 Nazanin Boniadi (/ˈnɑːzəniːn ˈboʊnjɑːdi/; Persian: نازنین بنیادی‎, [nɑːzæˈniːn bonjɑːˈdiː]; born 22 May 1980) is an English actress and human rights defender. Born in Iran and raised in London, she went to university in the United States, where she landed her first major acting role as Leyla Mir in the medical drama General Hospital (2007–2009) and its spin-off General Hospital: Night Shift (2007). Since then, she is best known for playing Fara Sherazi in the Showtime spy thriller series Homeland (2013–2014), Esther in the historical drama film Ben-Hur (2016), Clare Quayle in the Starz sci-fi thriller series Counterpart (2017–2018), and Zahra Kashani in the action thriller film Hotel Mumbai (2018). Boniadi was an Amnesty International spokesperson from 2009 to 2015 and has been a board member of the Center for Human Rights in Iran since 2015.

Boniadi was born in Tehran, Iran, at the height of the Iranian Revolution; less than a month after her birthdate, she and her parents relocated to London, where she was raised. She performed violin and ballet as a young girl.

She attended an independent school in Hampstead and earned a bachelor’s degree, with honours, in biological sciences from the University of California, Irvine. At UCI, she won the Chang Pin-Chun Undergraduate Research Award for molecular research involving cancer treatment and heart transplant rejection. She was also Assistant Editor-in-Chief of MedTimes, UCI’s undergraduate medical newspaper. In 2009, she studied contemporary drama at the Royal Academy of Dramatic Art in London.

Boniadi changed her career path from science and started pursuing acting in 2006. Her first major acting role was as Leyla Mir on the daytime drama General Hospital and its SOAPnet spin-off series General Hospital: Night Shift, making her the first contract actor to play a Middle Eastern character in American daytime television history. She is also the first actress born in Iran to ever be on contract on an American soap opera.

She was nominated for an NAACP Image Award for Outstanding Actress in a Daytime Drama Series in 2008 for her role in General Hospital.

She played Nora, a love interest for Neil Patrick Harris’ character Barney Stinson, on the sixth season of the hit CBS show How I Met Your Mother. She reprised this role during the show’s seventh and ninth seasons.

In May 2013, Boniadi joined the cast of Homeland season 3 as CIA analyst Fara Sherazi. She was promoted to a series regular for the show’s fourth season.

Boniadi also appeared in an eight episode arc on season 3 of Scandal as antagonist Adnan Salif. She portrayed Esther, the title character’s love interest, in the 2016 remake of Ben-Hur.

She narrated the soundtrack to the 2014 Iranian documentary film, To Light a Candle, made by Maziar Bahari and focusing on the persecution of Bahá’ís in Iran.

She starred with Dev Patel and Armie Hammer in the 2018 feature film Hotel Mumbai, a dramatisation of the 2008 Mumbai attacks. She played British-Iranian heiress Zahra Kashani. From 2018 to 2019, Boniadi played the series regular role of Clare Quayle in the Starz espionage drama Counterpart.

In early 2020, it was revealed that Boniadi had been cast in an undisclosed role in The Lord Of The Rings on Amazon Prime.