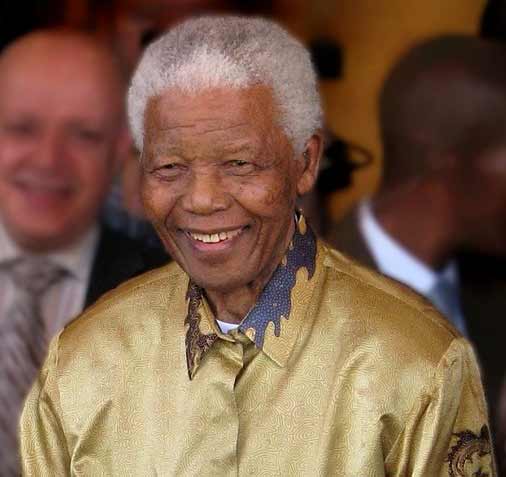 Cause of Death: Respiratory infection

Nelson Rolihlahla Mandela (18 July 1918 – 5 December 2013) was a South African anti-apartheid revolutionary, political leader and philanthropist who served as President of South Africa from 1994 to 1999. He was the country’s first black head of state and the first elected in a fully representative democratic election. His government focused on dismantling the legacy of apartheid by tackling institutionalised racism and fostering racial reconciliation. Ideologically an African nationalist and socialist, he served as the president of the African National Congress (ANC) party from 1991 to 1997.

A Xhosa speaker, Mandela was born to the Thembu royal family in Mvezo, Union of South Africa. He studied law at the University of Fort Hare and the University of Witwatersrand before working as a lawyer in Johannesburg. There he became involved in anti-colonial and African nationalist politics, joining the ANC in 1943 and co-founding its Youth League in 1944. After the National Party’s white-only government established apartheid, a system of racial segregation that privileged whites, he and the ANC committed themselves to its overthrow. Mandela was appointed president of the ANC’s Transvaal branch, rising to prominence for his involvement in the 1952 Defiance Campaign and the 1955 Congress of the People. He was repeatedly arrested for seditious activities and was unsuccessfully prosecuted in the 1956 Treason Trial. Influenced by Marxism, he secretly joined the banned South African Communist Party (SACP). Although initially committed to non-violent protest, in association with the SACP he co-founded the militant Umkhonto we Sizwe in 1961 and led a sabotage campaign against the government. He was arrested and imprisoned in 1962, and subsequently sentenced to life imprisonment for conspiring to overthrow the state following the Rivonia Trial.

Mandela served 27 years in prison, split between Robben Island, Pollsmoor Prison and Victor Verster Prison. Amid growing domestic and international pressure, and with fears of a racial civil war, President F. W. de Klerk released him in 1990. Mandela and de Klerk led efforts to negotiate an end to apartheid, which resulted in the 1994 multiracial general election in which Mandela led the ANC to victory and became president. Leading a broad coalition government which promulgated a new constitution, Mandela emphasised reconciliation between the country’s racial groups and created the Truth and Reconciliation Commission to investigate past human rights abuses. Economically, Mandela’s administration retained its predecessor’s liberal framework despite his own socialist beliefs, also introducing measures to encourage land reform, combat poverty and expand healthcare services. Internationally, he acted as mediator in the Pan Am Flight 103 bombing trial and served as secretary-general of the Non-Aligned Movement from 1998 to 1999. He declined a second presidential term and was succeeded by his deputy, Thabo Mbeki. Mandela became an elder statesman and focused on combating poverty and HIV/AIDS through the charitable Nelson Mandela Foundation.

Mandela was a controversial figure for much of his life. Although critics on the right denounced him as a communist terrorist and those on the far-left deemed him too eager to negotiate and reconcile with apartheid’s supporters, he gained international acclaim for his activism. Widely regarded as an icon of democracy and social justice, he received more than 250 honours, including the Nobel Peace Prize. He is held in deep respect within South Africa, where he is often referred to by his Thembu clan name, Madiba, and described as the “Father of the Nation”.

Mandela was born on 18 July 1918 in the village of Mvezo in Umtata, then part of South Africa’s Cape Province. Given the forename Rolihlahla, a Xhosa term colloquially meaning “troublemaker”, in later years he became known by his clan name, Madiba. His patrilineal great-grandfather, Ngubengcuka, was king of the Thembu people in the Transkeian Territories of South Africa’s modern Eastern Cape province. One of Ngubengcuka’s sons, named Mandela, was Nelson’s grandfather and the source of his surname. Because Mandela was the king’s child by a wife of the Ixhiba clan, a so-called “Left-Hand House”, the descendants of his cadet branch of the royal family were morganatic, ineligible to inherit the throne but recognised as hereditary royal councillors.

Nelson Mandela’s father, Gadla Henry Mphakanyiswa Mandela (1880–1928), was a local chief and councillor to the monarch; he was appointed to the position in 1915, after his predecessor was accused of corruption by a governing white magistrate. In 1926, Gadla was also sacked for corruption, but Nelson was told that his father had lost his job for standing up to the magistrate’s unreasonable demands. A devotee of the god Qamata, Gadla was a polygamist with four wives, four sons and nine daughters, who lived in different villages. Nelson’s mother was Gadla’s third wife, Nosekeni Fanny, daughter of Nkedama of the Right Hand House and a member of the amaMpemvu clan of the Thembu kingdom.

Mandela later stated that his early life was dominated by traditional Thembu custom and taboo. He grew up with two sisters in his mother’s kraal in the village of Qunu, where he tended herds as a cattle-boy and spent much time outside with other boys. Both his parents were illiterate, but being a devout Christian, his mother sent him to a local Methodist school when he was about seven. Baptised a Methodist, Mandela was given the English forename of “Nelson” by his teacher. When Mandela was about nine, his father came to stay at Qunu, where he died of an undiagnosed ailment which Mandela believed to be lung disease. Feeling “cut adrift”, he later said that he inherited his father’s “proud rebelliousness” and “stubborn sense of fairness”.

Mandela’s mother took him to the “Great Place” palace at Mqhekezweni, where he was entrusted to the guardianship of the Thembu regent, Chief Jongintaba Dalindyebo. Although he did not see his mother again for many years, Mandela felt that Jongintaba and his wife Noengland treated him as their own child, raising him alongside their son, Justice, and daughter, Nomafu. As Mandela attended church services every Sunday with his guardians, Christianity became a significant part of his life. He attended a Methodist mission school located next to the palace, where he studied English, Xhosa, history and geography. He developed a love of African history, listening to the tales told by elderly visitors to the palace, and was influenced by the anti-imperialist rhetoric of a visiting chief, Joyi. At the time he nevertheless considered the European colonialists not as oppressors but as benefactors who had brought education and other benefits to southern Africa. Aged 16, he, Justice and several other boys travelled to Tyhalarha to undergo the ulwaluko circumcision ritual that symbolically marked their transition from boys to men; afterwards he was given the name Dalibunga.

Mandela was widely considered a charismatic leader, described by biographer Mary Benson as “a born mass leader who could not help magnetizing people”. He was highly image conscious and throughout his life always sought out fine quality clothes, with many commentators believing that he carried himself in a regal manner. His aristocratic heritage was repeatedly emphasised by supporters, thus contributing to his “charismatic power”. While living in Johannesburg in the 1950s, he cultivated the image of the “African gentleman”, having “the pressed clothes, correct manners, and modulated public speech” associated with such a position. In doing so, Lodge argued that Mandela became “one of the first media politicians … embodying a glamour and a style that projected visually a brave new African world of modernity and freedom”. Mandela was known to change his clothes several times a day, and he became so associated with highly coloured Batik shirts after assuming the presidency that they came to be known as “Madiba shirts”.

For political scientists Betty Glad and Robert Blanton, Mandela was an “exceptionally intelligent, shrewd, and loyal leader”. His official biographer, Anthony Sampson, commented that he was a “master of imagery and performance”, excelling at presenting himself well in press photographs and producing sound bites. His public speeches were presented in a formal, stiff manner, and often consisted of clichéd set phrases. He typically spoke slowly, and carefully chose his words. Although he was not considered a great orator, his speeches conveyed “his personal commitment, charm and humour”.

Mandela was a private person who often concealed his emotions and confided in very few people. Privately, he lived an austere life, refusing to drink alcohol or smoke, and even as president made his own bed. Renowned for his mischievous sense of humour, he was known for being both stubborn and loyal, and at times exhibited a quick temper. He was typically friendly and welcoming, and appeared relaxed in conversation with everyone, including his opponents. A self-described Anglophile, he claimed to have lived by the “trappings of British style and manners”. Constantly polite and courteous, he was attentive to all, irrespective of their age or status, and often talked to children or servants. He was known for his ability to find common ground with very different communities. In later life, he always looked for the best in people, even defending political opponents to his allies, who sometimes thought him too trusting of others. He was fond of Indian cuisine, and had a lifelong interest in archaeology and boxing.

He was raised in the Methodist denomination of Christianity; the Methodist Church of Southern Africa claimed that he retained his allegiance to them throughout his life. On analysing Mandela’s writings, the theologian Dion Forster described him as a Christian humanist, although added that his thought relied to a greater extent on the Southern African concept of Ubuntu than on Christian theology. According to Sampson, Mandela never had “a strong religious faith” however, while Boehmer stated that Mandela’s religious belief was “never robust”.

Mandela was very self-conscious about being a man and regularly made references to manhood. He was heterosexual, and biographer Fatima Meer said that he was “easily tempted” by women. Another biographer, Martin Meredith, characterised him as being “by nature a romantic”, highlighting that he had relationships with various women. Mandela was married three times, fathered six children, and had seventeen grandchildren and at least seventeen great-grandchildren. He could be stern and demanding of his children, although he was more affectionate with his grandchildren. His first marriage was to Evelyn Ntoko Mase in October 1944; they divorced in March 1958 under the multiple strains of his adultery and constant absences, devotion to revolutionary agitation, and the fact that she was a Jehovah’s Witness, a religion requiring political neutrality. Mandela’s second wife was the social worker Winnie Madikizela-Mandela, whom he married in June 1958. They divorced in March 1996. Mandela married his third wife, Graça Machel, on his 80th birthday in July 1998.