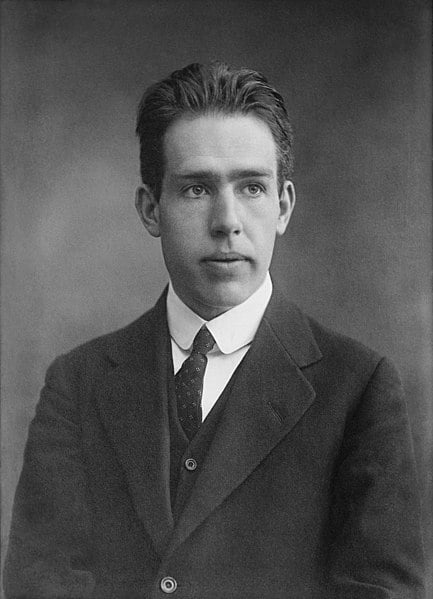 Niels Henrik David Bohr (7 October 1885 – 18 November 1962) was a Danish physicist who made foundational contributions to understanding atomic structure and quantum theory, for which he received the Nobel Prize in Physics in 1922. Bohr was also a philosopher and a promoter of scientific research.

Bohr developed the Bohr model of the atom, in which he proposed that energy levels of electrons are discrete and that the electrons revolve in stable orbits around the atomic nucleus but can jump from one energy level (or orbit) to another. Although the Bohr model has been supplanted by other models, its underlying principles remain valid. He conceived the principle of complementarity: that items could be separately analysed in terms of contradictory properties, like behaving as a wave or a stream of particles. The notion of complementarity dominated Bohr’s thinking in both science and philosophy.

Bohr founded the Institute of Theoretical Physics at the University of Copenhagen, now known as the Niels Bohr Institute, which opened in 1920. Bohr mentored and collaborated with physicists including Hans Kramers, Oskar Klein, George de Hevesy, and Werner Heisenberg. He predicted the existence of a new zirconium-like element, which was named hafnium, after the Latin name for Copenhagen, where it was discovered. Later, the element bohrium was named after him.

During the 1930s Bohr helped refugees from Nazism. After Denmark was occupied by the Germans, he had a famous meeting with Heisenberg, who had become the head of the German nuclear weapon project. In September 1943 word reached Bohr that he was about to be arrested by the Germans, and he fled to Sweden. From there, he was flown to Britain, where he joined the British Tube Alloys nuclear weapons project, and was part of the British mission to the Manhattan Project. After the war, Bohr called for international cooperation on nuclear energy. He was involved with the establishment of CERN and the Research Establishment Risø of the Danish Atomic Energy Commission and became the first chairman of the Nordic Institute for Theoretical Physics in 1957.

Bohr was born in Copenhagen, Denmark, on 7 October 1885, the second of three children of Christian Bohr, a professor of physiology at the University of Copenhagen, and Ellen Adler Bohr, who came from a wealthy Danish Jewish family prominent in banking and parliamentary circles. He had an elder sister, Jenny, and a younger brother Harald. Jenny became a teacher, while Harald became a mathematician and footballer who played for the Danish national team at the 1908 Summer Olympics in London. Niels was a passionate footballer as well, and the two brothers played several matches for the Copenhagen-based Akademisk Boldklub (Academic Football Club), with Niels as goalkeeper.

Bohr was educated at Gammelholm Latin School, starting when he was seven. In 1903, Bohr enrolled as an undergraduate at Copenhagen University. His major was physics, which he studied under Professor Christian Christiansen, the university’s only professor of physics at that time. He also studied astronomy and mathematics under Professor Thorvald Thiele, and philosophy under Professor Harald Høffding, a friend of his father.

In 1905 a gold medal competition was sponsored by the Royal Danish Academy of Sciences and Letters to investigate a method for measuring the surface tension of liquids that had been proposed by Lord Rayleigh in 1879. This involved measuring the frequency of oscillation of the radius of a water jet. Bohr conducted a series of experiments using his father’s laboratory in the university; the university itself had no physics laboratory. To complete his experiments, he had to make his own glassware, creating test tubes with the required elliptical cross-sections. He went beyond the original task, incorporating improvements into both Rayleigh’s theory and his method, by taking into account the viscosity of the water, and by working with finite amplitudes instead of just infinitesimal ones. His essay, which he submitted at the last minute, won the prize. He later submitted an improved version of the paper to the Royal Society in London for publication in the Philosophical Transactions of the Royal Society.

Harald became the first of the two Bohr brothers to earn a master’s degree, which he earned for mathematics in April 1909. Niels took another nine months to earn his on the electron theory of metals, a topic assigned by his supervisor, Christiansen. Bohr subsequently elaborated his master’s thesis into his much-larger Doctor of Philosophy (dr. phil.) thesis. He surveyed the literature on the subject, settling on a model postulated by Paul Drude and elaborated by Hendrik Lorentz, in which the electrons in a metal are considered to behave like a gas. Bohr extended Lorentz’s model, but was still unable to account for phenomena like the Hall effect, and concluded that electron theory could not fully explain the magnetic properties of metals. The thesis was accepted in April 1911, and Bohr conducted his formal defence on 13 May. Harald had received his doctorate the previous year. Bohr’s thesis was groundbreaking, but attracted little interest outside Scandinavia because it was written in Danish, a Copenhagen University requirement at the time. In 1921, the Dutch physicist Hendrika Johanna van Leeuwen would independently derive a theorem from Bohr’s thesis that is today known as the Bohr–van Leeuwen theorem.

In 1910, Bohr met Margrethe Nørlund, the sister of the mathematician Niels Erik Nørlund. Bohr resigned his membership in the Church of Denmark on 16 April 1912, and he and Margrethe were married in a civil ceremony at the town hall in Slagelse on 1 August. Years later, his brother Harald similarly left the church before getting married. Bohr and Margrethe had six sons. The oldest, Christian, died in a boating accident in 1934, and another, Harald, died from childhood meningitis. Aage Bohr became a successful physicist, and in 1975 was awarded the Nobel Prize in physics, like his father. Hans Bohr became a physician; Erik Bohr, a chemical engineer; and Ernest, a lawyer. Like his uncle Harald, Ernest Bohr became an Olympic athlete, playing field hockey for Denmark at the 1948 Summer Olympics in London.

Bohr received numerous honours and accolades. In addition to the Nobel Prize, he received the Hughes Medal in 1921, the Matteucci Medal in 1923, the Franklin Medal in 1926, the Copley Medal in 1938, the Order of the Elephant in 1947, the Atoms for Peace Award in 1957 and the Sonning Prize in 1961. He became foreign member of the Royal Netherlands Academy of Arts and Sciences in 1923, and of the Royal Society in 1926. The Bohr model’s semicentennial was commemorated in Denmark on 21 November 1963 with a postage stamp depicting Bohr, the hydrogen atom and the formula for the difference of any two hydrogen energy levels: {\displaystyle h\nu =\epsilon _{2}-\epsilon _{1}}{\displaystyle h\nu =\epsilon _{2}-\epsilon _{1}}. Several other countries have also issued postage stamps depicting Bohr. In 1997, the Danish National Bank began circulating the 500-krone banknote with the portrait of Bohr smoking a pipe. An asteroid, 3948 Bohr, was named after him,[145] as was the Bohr lunar crater and bohrium, the chemical element with atomic number 107.