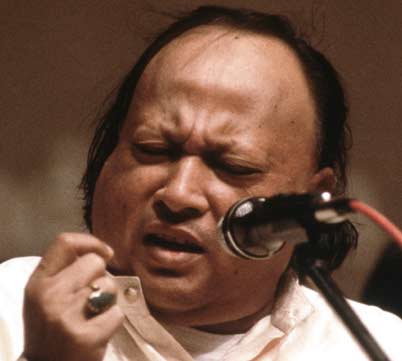 Nusrat Fateh Ali Khan (NFAK) (Urdu/Punjabi: نصرت فتح علی خان), born Pervez Fateh Ali Khan (13 October 1948 – 16 August 1997), was a Pakistani vocalist, musician and music director primarily a singer of Qawwali, a form of Sufi Islamic devotional music. Widely considered one of the greatest voices ever recorded, he possessed an extraordinary range of vocal abilities and could perform at a high level of intensity for several hours. He belonged to the Patiala gharana extending the 600-year old Qawwali tradition of his family, Khan is widely credited with introducing Qawwali music to international audiences. He is popularly known as “Shahenshah-e-Qawwali”, meaning “The King of Kings of Qawwali”.

Born in Faisalabad, Khan had his first public performance at the age of 15, at his father’s chelum. He became the head of the family qawwali party in 1971. He was signed by Oriental Star Agencies, Birmingham, England in the early 1980s. Khan went on to release movie scores and albums in Europe, India, Japan, Pakistan and the U.S. He engaged in collaborations and experiments with Western artists, becoming a well-known world music artist. He toured extensively, performing in over 40 countries. In addition to popularising Qawwali music, he also had a big impact on contemporary South Asian popular music, including Pakistani pop, Indi-pop and Bollywood music.

Khan was born in a Punjabi Muslim family in Faisalabad, Punjab, Pakistan, in 1948. His family originates from Basti Sheikh in Jalandhar Present day india. His ancestors learned music and singing there and adopted it as a profession. He was the fifth child and first son of Fateh Ali Khan, a musicologist, vocalist, instrumentalist, and qawwal. Khan’s family, which included four older sisters and a younger brother, Farrukh Fateh Ali Khan, grew up in central Faisalabad. The tradition of qawwali in the family had passed down through successive generations for almost 600 years. Initially, his father did not want Khan to follow the family’s vocation. He had his heart set on Nusrat choosing a much more respectable career path and becoming a doctor or engineer because he felt Qawwali artists had low social status. However, Khan showed such an aptitude for and interest in Qawwali, that his father finally relented.

The young man began by learning the tabla before moving on to vocals.[citation needed] In 1964, Khan’s father died, leaving his musical education under the supervision of his paternal uncles, Mubarak Ali Khan and Salamat Ali Khan. He is the uncle of singer Rahat Fateh Ali Khan. Nusrat was known as Pervaiz until he visited Ghulam Ghaus Samdani who changed his name to Nusrat Fateh Ali. Samdani also told him that he would become a great singer.

In 1971, after the death of his uncle Mubarak Ali Khan, Khan became the official leader of the family Qawwali party and the party became known as Nusrat Fateh Ali Khan, Mujahid Mubarak Ali Khan & Party. Khan’s first public performance as the leader of the Qawwali party was at a studio recording broadcast as part of an annual music festival organized by Radio Pakistan, known as Jashn-e-Baharan. Khan sang mainly in Urdu and Punjabi and occasionally in Persian, Braj Bhasha and Hindi. His first major hit in Pakistan was the song Haq Ali Ali, which was performed in a traditional style and with traditional instrumentation. The song featured restrained use of Khan’s sargam improvisations.

Khan, throughout his career, had great understanding with many south Asian singers such as Alam Lohar, Noor Jehan, A. R. Rahman, Asha Bhosle, Javed Akhtar, and the Lata Mangeshkar.

In the 1992 to 1993 academic year, Khan was a Visiting Artist in the Ethnomusicology department at the University of Washington, Seattle, Washington, United States.

In 1988, Khan teamed up with Peter Gabriel on the soundtrack to The Last Temptation of Christ, which led to Khan being signed to Gabriel’s Real World label. He would go on to release five albums of traditional Qawwali through Real World, along with the more experimental albums Mustt Mustt (1990), Night Song (1996), and the posthumous remix album Star Rise (1997).

Khan’s experimental work for Real World, which featured his collaborations with the Canadian guitarist Michael Brook, spurred on several further collaborations with a number of other Western composers and rock musicians. One of the most noteworthy of these collaborations came in 1995, when Khan grouped with Pearl Jam’s lead singer Eddie Vedder on two songs for the soundtrack to Dead Man Walking. Khan also provided vocals for The Prayer Cycle, which was put together by Jonathan Elias, but died before the tracks could be completed. Alanis Morissette was brought in to sing with his unfinished vocals. In 2002, Gabriel included Khan’s vocals on the posthumously released track “Signal to Noise” on his album Up.

Khan contributed songs to, and performed in, several Pakistani films. Shortly before his death, he composed music for three Bollywood films, which includes the film Aur Pyaar Ho Gaya, in which he also sang for “Koi Jaane Koi Na Jaane” on-screen with the lead pair, and “Zindagi Jhoom Kar”. He also composed music for Kartoos, where he sang for “Ishq Da Rutba”, and “Bahaa Na Aansoo”, alongside Udit Narayan. He died very shortly prior to the movie’s release. His final music composition for Bollywood was for the movie, Kachche Dhaage, where he sang in “Iss Shaan-E-Karam Ka Kya Kehna”. The movie was released in 1999, two years after his death. The two singing sisters of Bollywood, Asha Bhosle and Lata Mangeshkar sang for the songs he composed in his brief stint in Bollywood. He also sang “Saya Bhi Saath Jab Chhod Jaye” for Sunny Deol’s movie Dillagi. The song was released in 1999, two years after Khan’s death. He also sang “Dulhe Ka Sehra” from the Bollywood movie Dhadkan which was released in 2000.

Khan contributed the song “Gurus of Peace” to the 1997 album Vande Mataram, composed by A. R. Rahman, and released to celebrate the 50th anniversary of India’s independence. As a posthumous tribute, Rahman later released an album titled Gurus of Peace, which included “Allah Hoo” by Khan. Rahman’s 2007 song “Tere Bina” for the film Guru was also composed as a tribute to Khan.

Various reports said Khan weighed over 135 kilos. He had been seriously ill for several months, according to a spokesperson at his U.S. label, American Recordings. After traveling to London from his native Pakistan for treatment for liver and kidney problems, he was rushed from the airport to Cromwell Hospital in London.

He died of a sudden cardiac arrest at Cromwell Hospital on 16 August 1997, aged 48. His body was repatriated to Faisalabad, and his funeral was a public affair. He was buried in Kabootran Wala Qabristan also known as Jhang Road Graveyard on Jhang Road, Faisalabad.

His wife, Naheed Nusrat, died on 13 September 2013 in Credit Valley Hospital in Mississauga, Ontario, Canada. Naheed had moved to Canada after the death of her husband. She is survived by their daughter Nida Khan. Khan’s musical legacy is now carried forward by his nephews, Rahat Fateh Ali Khan and Rizwan-Muazzam.

Khan is widely considered to be the most important qawwal in history. In 1987, he received the President of Pakistan’s Award for Pride of Performance for his contribution to Pakistani music. In 1995, he received the UNESCO Music Prize. In 1996 he was awarded Grand Prix des Amériques at Montreal World Film Festival for exceptional contribution to the art of cinema. In the same year, Khan received the Arts and Culture Prize of the Fukuoka Asian Culture Prizes. In Japan, he was also remembered as the Budai or “Singing Buddha”.

In 1997, he was nominated for two Grammy Awards, for Best Traditional Folk Album and Best World Music Album. As of 2001, he held the Guinness World Record for the “Most Qawwali Recordings”, having recorded over 125 Qawwali albums before his death. In 2005, Khan posthumously received the “Legends” award at the UK Asian Music Awards. Time magazine’s issue of 6 November 2006, “60 Years of Asian Heroes”, lists him as one of the top 12 artists and thinkers in the last 60 years. He also appeared on NPR’s 50 great voices list in 2010. In August 2010 he was included in CNN’s list of the twenty most iconic musicians from the past fifty years. In 2008, Khan was listed in 14th position in UGO’s list of the best singers of all time.

Many honorary titles were bestowed upon Khan during his 25-year music career. He was given the title of Ustad (the master) after performing classical music at a function in Lahore on the anniversary of his father’s death.