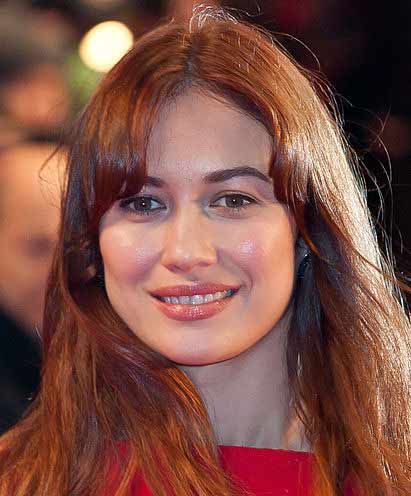 She was discovered as a model in Moscow at the age of 13. She moved to Paris to pursue a modelling career at the age of 16 and started her acting career in 2005. She found success as an actress for her role as Nika Boronina in the film adaptation of the video game Hitman (2007), and then mainstream prominence with the role of Bond girl Camille Montes in the 22nd James Bond film, Quantum of Solace (2008). More recently she starred in Stephen S. Campanelli’s Momentum (2015), Terrence Malick’s To the Wonder (2012), alongside Tom Cruise in Oblivion (2013), with Russell Crowe in The Water Diviner (2014), alongside Rowan Atkinson in the spy comedy film Johnny English Strikes Again (2018) and The Room (2019).

Kurylenko was born in Berdyansk, Ukraine, then Ukrainian SSR. Her father, Konstantin, is Ukrainian, and her mother, Marina Alyabusheva, who teaches art and is an exhibited artist, was born in Irkutsk Oblast, Russia, and is of Russian , Buryat and Belarusian ancestry.

Her parents divorced when she was three and she was raised by her single mother. Kurylenko rarely had contact with her father, meeting him for the first time after the split when she was eight, and later when she was thirteen.

Kurylenko moved from native Berdyansk to Moscow at 15. At the age of 16, she moved to Paris. In 1996, she signed a contract with the Paris-based Madison modelling agency where she met her publicist Valérie Rosen. The following year, by the age of 18, she had appeared on the covers of Vogue and Elle magazines. While working as a model in Paris, Kurylenko supported her mother in Ukraine.

She also appeared on the covers of Madame Figaro and Marie Claire magazines. She became the face of brands Bebe, Clarins, and Helena Rubinstein. She has also modelled for Roberto Cavalli and Kenzo and appeared in the Victoria’s Secret catalogue.

One of her first acting appearances was in Seal’s music video, “Love’s Divine” in 2003, but her film career truly began in France during 2005. She received the certificate of excellence award at the 2006 Brooklyn International Film Festival for her performance in L’Annulaire, and also starred in the Paris, je t’aime segment “Quartier de la Madeleine” opposite Elijah Wood. That same year, she was selected to be the face of Kenzo’s new fragrance, Kenzo Amour. She has appeared in all subsequent Kenzo Amour advertisements.

In 2007, she starred in Hitman alongside Timothy Olyphant. She had a minor role in Max Payne as Natasha. She played Bond girl Camille Montes in the 2008 James Bond film, Quantum of Solace (after beating out Gal Gadot in the auditions). In the film she plays the role of a Bolivian Secret Service agent named Camille, who teams up with James Bond to avenge the death of her parents.

She was featured on the cover of the December 2008 issue of the US edition of Maxim magazine and on the cover of the February 2009 issue of the Ukrainian edition of Maxim. In Ukraine the mayor of Berdyansk suggested naming a street after her in early 2008, and she and her mother met Ukraine’s First Lady Kateryna Yushchenko in President Yushchenko’s family country house.

Kurylenko appeared in Terrence Malick’s To the Wonder, shot in fall 2010 in Bartlesville, Oklahoma. She also appeared in Oblivion, a science fiction film starring Tom Cruise and directed by Joseph Kosinski. Kurylenko played Alice Fournier who is the main subject of the spy thriller November Man.

In 2014, Kurylenko starred in the historical drama film The Water Diviner alongside Russell Crowe (who made his directorial debut), Jacqueline McKenzie and Jai Courtney. She also played the headmistress in Vampire Academy.

Kurylenko and her former partner Max Benitz have one son, Alexander Max Horatio, born on 3 October 2015.

On 15 March 2020, Kurylenko announced she had tested positive for COVID-19. On 22 March, she said that she had completely recovered.