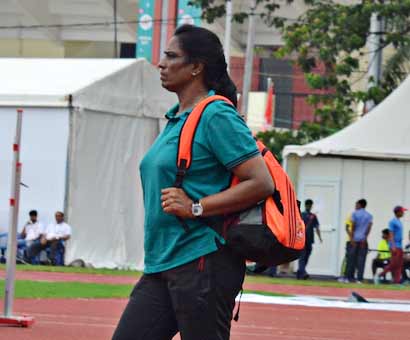 Usha married V. Srinivasan, an inspector with Central Industrial Security Force in 1991. The couple has a son.

Usha was first noticed in 1976 by O. M. Nambiar, an athletics coach, at a sports prize-distribution ceremony. In an interview with Rediff.com in 2000, he said, “What impressed me at first sight about Usha was her lean shape and fast walking style. I knew she could become a very good sprinter.” The same year, he began coaching her. Quick results followed when she won five medals at the inter-state meet for juniors, in Kollam in 1978, with four gold medals in 100 m, 200 m, 60 m hurdles and high jump, silver in long jump and bronze in 4 x 100 m relay. In the year’s Kerala State college meet, she won 14 medals. She went on to win multiple medals at the 1979 National Games and 1980 National inter-state meet setting many meet records.

Represented India in 4 x 100 metres relay together with Tanay Manya, E. B. Shyla, and Saraswati Saha at the 1998 Asian Championships in Athletics where her team won the gold medal on way to setting the current national record of 44.43 s.