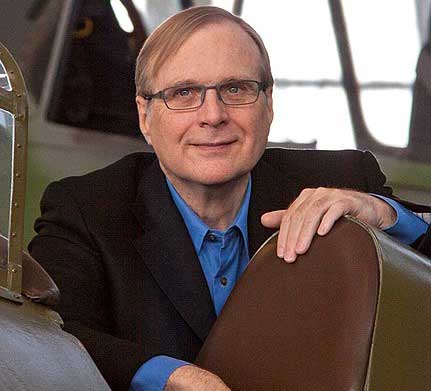 Paul Gardner Allen (January 21, 1953 – October 15, 2018) was an American business magnate, researcher, investor, and philanthropist. He was best known for co-founding Microsoft Corporation with childhood friend Bill Gates in 1975, which helped spark the microcomputer revolution of the 1970s and 1980s, later making Microsoft the world’s largest personal computer software company. Allen was ranked as the 44th-wealthiest person in the world by Forbes in 2018, with an estimated net worth of $20.3 billion at the time of his death.

Allen left active operations at Microsoft in early 1983 after a Hodgkin lymphoma diagnosis, remaining on its board as vice chairman. He and his sister, Jody Allen, founded Vulcan Inc. in 1986, a privately held company that managed his various business and philanthropic efforts. He had a multi-billion dollar investment portfolio including technology and media companies, scientific research, real estate holdings, private space flight ventures, and stakes in other sectors. He owned the Seattle Seahawks of the National Football League and the Portland Trail Blazers of the National Basketball Association, and was part-owner of the Seattle Sounders FC of Major League Soccer. In 2000 he resigned from his position on Microsoft’s board and assumed the post of senior strategy advisor to the company’s management team.

Allen was also the founder of the Allen Institutes for Brain Science, Artificial Intelligence and Cell Science, as well as companies like Stratolaunch Systems and Apex Learning. He gave more than $2 billion to causes such as education, wildlife and environmental conservation, the arts, healthcare, community services and more. In 2004, he funded the first manned private spaceplane with SpaceShipOne. He received numerous awards and honors in several different professions and was listed among the Time 100 Most Influential People in the World in 2007 and 2008. Allen was diagnosed with Non-Hodgkin lymphoma in 2009. He died of septic shock related to the cancer on October 15, 2018.

Allen was born on January 21, 1953, in Seattle, Washington, to Kenneth Sam Allen and Edna Faye (née Gardner) Allen. He attended Lakeside School, a private school in Seattle where he befriended Bill Gates, with whom he shared an enthusiasm for computers, and they used Lakeside’s Teletype terminal to develop their programming skills on several time-sharing computer systems. They also used the laboratory of the Computer Science Department of the University of Washington, doing personal research and computer programming; they were banned from the laboratory in 1971 for abuse of their privileges there.

Gates and Allen joined with Ric Weiland and Gates’ childhood best friend and first collaborator, Kent Evans, to form the Lakeside Programming Club and find bugs in Computer Center Corporation’s software, in exchange for extra computer time. In 1972, after Evans’ sudden death due to a mountain climbing accident, Gates turned to Allen for help finishing an automated system of Lakeside’s entire class scheduling procedure. They then formed Traf-O-Data to make traffic counters based on the Intel 8008 processor. According to Allen, he and Gates would go “dumpster diving” in their teenage years for computer program code.

Allen attained a perfect SAT score of 1600 and went to Washington State University, where he joined the Phi Kappa Theta fraternity. He dropped out of college after two years to work as a programmer for Honeywell in Boston near Harvard University where Gates was enrolled. Allen convinced Gates to drop out of Harvard in order to create Microsoft.

Allen was diagnosed with Stage 1-A Hodgkin’s lymphoma in 1982. Although his cancer was successfully treated by several months of radiation therapy, Allen was diagnosed with non-Hodgkin lymphoma in 2009. Likewise, the cancer was successfully treated until it returned in 2018, which ultimately caused his death by septic shock on October 15, 2018. He was 65 years old.

Several Seattle-area landmarks, including the Space Needle, Columbia Center and CenturyLink Field, as well as various Microsoft offices throughout the United States, were illuminated in blue on November 3, 2018, as a tribute to Allen. He was also honored by his early business partner and lifelong friend Bill Gates, who said in a statement:

Paul loved life and those around him, and we all cherished him in return. He deserved much more time, but his contributions to the world of technology and philanthropy will live on for generations to come. I will miss him tremendously.

Allen received numerous awards in many different areas, including sports, philanthropy, and the arts: