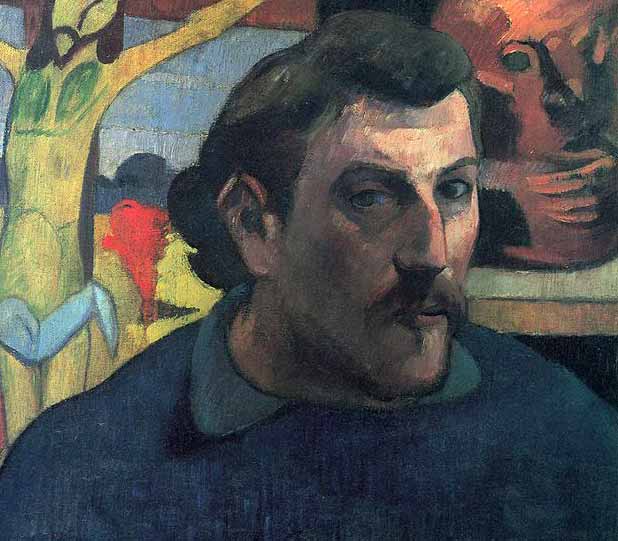 On view: National Gallery of Art, The Metropolitan Museum of Art

Eugène Henri Paul Gauguin (7 June 1848 – 8 May 1903) was a French Post-Impressionist artist. Unappreciated until after his death, Gauguin is now recognized for his experimental use of color and Synthetist style that were distinct from Impressionism. Toward the end of his life, he spent ten years in French Polynesia. The paintings from this time depict people or landscapes from that region.

His work was influential to the French avant-garde and many modern artists, such as Pablo Picasso and Henri Matisse. Gauguin’s art became popular after his death, partially from the efforts of art dealer Ambroise Vollard, who organized exhibitions of his work late in his career and assisted in organizing two important posthumous exhibitions in Paris.

Gauguin was an important figure in the Symbolist movement as a painter, sculptor, printmaker, ceramist, and writer. His expression of the inherent meaning of the subjects in his paintings, under the influence of the cloisonnist style, paved the way to Primitivism and the return to the pastoral. He was also an influential proponent of wood engraving and woodcuts as art forms.

Gauguin was born in Paris to Clovis Gauguin and Aline Chazal on 7 June 1848. His birth coincided with revolutionary upheavals throughout Europe that year. His father, a 34-year-old liberal journalist, came from a family of entrepreneurs residing in Orléans. He was compelled to flee France when the newspaper for which he wrote was suppressed by French authorities. Gauguin’s mother was the 22-year-old daughter of André Chazal, an engraver, and Flora Tristan, an author and activist in early socialist movements. Their union ended when André assaulted his wife Flora and was sentenced to prison for attempted murder.

Paul Gauguin’s maternal grandmother, Flora Tristan, was the illegitimate daughter of Thérèse Laisnay and Don Mariano de Tristan Moscoso. Details of Thérèse’s family background are not known; her father, Don Mariano, came from an aristocratic Spanish family from the Peruvian city of Arequipa. He was an officer of the Dragoons. Members of the wealthy Tristan Moscoso family held powerful positions in Peru. Nonetheless, Don Mariano’s unexpected death plunged his mistress and daughter Flora into poverty. When Flora’s marriage with André failed, she petitioned for and obtained a small monetary settlement from her father’s Peruvian relatives. She sailed to Peru in hopes of enlarging her share of the Tristan Moscoso family fortune. This never materialized; but she successfully published a popular travelogue of her experiences in Peru which launched her literary career in 1838. An active supporter of early socialist societies, Gauguin’s maternal grandmother helped to lay the foundations for the 1848 revolutionary movements. Placed under surveillance by French police and suffering from overwork, she died in 1844. Her grandson Paul “idolized his grandmother, and kept copies of her books with him to the end of his life”.

In 1850, Clovis Gauguin departed for Peru with his wife Aline and young children in hopes of continuing his journalistic career under the auspices of his wife’s South American relations.[14] He died of a heart attack en route, and Aline arrived in Peru a widow with the 18-month-old Paul and his 2​1⁄2 year-old sister, Marie. Gauguin’s mother was welcomed by her paternal granduncle, whose son-in-law would shortly assume the presidency of Peru. To the age of six, Paul enjoyed a privileged upbringing, attended by nursemaids and servants. He retained a vivid memory of that period of his childhood which instilled “indelible impressions of Peru that haunted him the rest of his life”.

Gauguin’s idyllic childhood ended abruptly when his family mentors fell from political power during Peruvian civil conflicts in 1854. Aline returned to France with her children, leaving Paul with his paternal grandfather, Guillaume Gauguin, in Orléans. Deprived by the Peruvian Tristan Moscoso clan of a generous annuity arranged by her granduncle, Aline settled in Paris to work as a dressmaker.

At the beginning of 1903, Gauguin engaged in a campaign designed to expose the incompetence of the island’s gendarmes, in particular Jean-Paul Claverie, for taking the side of the natives directly in a case involving the alleged drunkenness of a group of them. Claverie, however, escaped censure. At the beginning of February, Gauguin wrote to the administrator, François Picquenot, alleging corruption by one of Claverie’s subordinates. Picquenot investigated the allegations but could not substantiate them. Claverie responded by filing a charge of libeling a gendarme against Gauguin, who was subsequently fined 500 francs and sentenced to three months’ imprisonment by the local magistrate on 27 March 1903. Gauguin immediately filed an appeal in Papeete and set about raising the funds to travel to Papeete to hear his appeal.