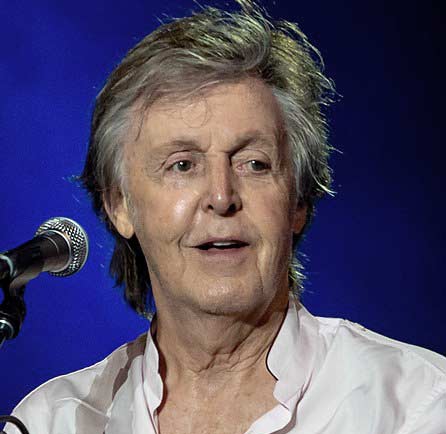 Sir James Paul McCartney CH MBE (born 18 June 1942) is an English singer, songwriter, musician, composer, and record and film producer who gained worldwide fame as co-lead vocalist and bassist for the Beatles. His songwriting partnership with John Lennon remains the most successful in history. After the group disbanded in 1970, he pursued a solo career and formed the band Wings with his first wife, Linda, and Denny Laine.

A self-taught musician, McCartney is proficient on bass, guitar, keyboards, and drums. He is known for his melodic approach to bass-playing (mainly playing with a plectrum), his versatile and wide tenor vocal range (spanning over four octaves), and his eclecticism (exploring styles ranging from pre-rock and roll pop to classical and electronica). McCartney began his career as a member of the Quarrymen in 1957, which evolved into the Beatles in 1960. Starting with the 1967 album Sgt. Pepper’s Lonely Hearts Club Band, he gradually became the Beatles’ de facto leader, providing the creative impetus for most of their music and film projects. His Beatles songs “And I Love Her” (1964), “Yesterday” (1965), “Eleanor Rigby” (1966) and “Blackbird” (1968) rank among the most covered songs in history.

In 1970, McCartney debuted as a solo artist with the album McCartney. Throughout the 1970s, he led Wings, one of the most successful bands of the decade, with more than a dozen international top 10 singles and albums. McCartney resumed his solo career in 1980. Since 1989, he has toured consistently as a solo artist. In 1993, he formed the music duo the Fireman with Youth of Killing Joke. Beyond music, he has taken part in projects to promote international charities related to such subjects as animal rights, seal hunting, land mines, vegetarianism, poverty, and music education.

McCartney is one of the most successful composers and performers of all time. He has written or co-written 32 songs that have reached No. 1 on the Billboard Hot 100, and as of 2009, had sales of 25.5 million RIAA-certified units in the United States. His honours include two inductions into the Rock and Roll Hall of Fame (as a member of the Beatles in 1988 and as a solo artist in 1999), 18 Grammy Awards, an appointment as a Member of the Order of the British Empire in 1965, and a knighthood in 1997 for services to music. As of 2020, he is also one of the wealthiest musicians in the world, with an estimated fortune of £800 million.

James Paul McCartney was born on 18 June 1942 at Walton Hospital in the Walton area of Liverpool, where his mother, Mary Patricia (née Mohin), had qualified to practise as a nurse. His father, James (“Jim”) McCartney, was absent from his son’s birth due to his work as a volunteer firefighter during World War II. McCartney has a younger brother named Michael and a stepsister named Ruth. The children were baptised in their mother’s Catholic faith, even though their father was a former Protestant who had turned agnostic. Religion was not emphasised in the household.

McCartney attended Stockton Wood Road Primary School in Speke from 1947 until 1949, when he transferred to Joseph Williams Junior School in Belle Vale because of overcrowding at Stockton. In 1953, he was one of only three students out of 90 to pass the 11-Plus exam, meaning he could attend the Liverpool Institute, a grammar school rather than a secondary modern school. In 1954, he met schoolmate George Harrison on the bus from his suburban home in Speke. The two quickly became friends; McCartney later admitted: “I tended to talk down to him because he was a year younger.”

McCartney’s mother, Mary, was a midwife and the family’s primary wage earner; her earnings enabled them to move into 20 Forthlin Road in Allerton, where they lived until 1964. She rode a bicycle to her patients; McCartney described an early memory of her leaving at “about three in the morning [the] streets … thick with snow”. On 31 October 1956, when McCartney was 14, his mother died of an embolism as a complication of surgery for breast cancer. McCartney’s loss later became a point of connection with John Lennon, whose mother, Julia, had died when he was 17.

McCartney’s father was a trumpet player and pianist who led Jim Mac’s Jazz Band in the 1920s. He kept an upright piano in the front room, encouraged his sons to be musical and advised McCartney to take piano lessons. However, McCartney preferred to learn by ear. When McCartney was 11, his father encouraged him to audition for the Liverpool Cathedral choir, but he was not accepted. McCartney then joined the choir at St Barnabas’ Church, Mossley Hill. McCartney received a nickel-plated trumpet from his father for his fourteenth birthday, but when rock and roll became popular on Radio Luxembourg, McCartney traded it for a £15 Framus Zenith (model 17) acoustic guitar, since he wanted to be able to sing while playing. He found it difficult to play guitar right-handed, but after noticing a poster advertising a Slim Whitman concert and realising that Whitman played left-handed, he reversed the order of the strings. McCartney wrote his first song, “I Lost My Little Girl”, on the Zenith, and composed another early tune that would become “When I’m Sixty-Four” on the piano. American rhythm and blues influenced him, and Little Richard was his schoolboy idol; “Long Tall Sally” was the first song McCartney performed in public, at a Butlin’s Filey holiday camp talent competition.

McCartney was inducted into the Rock and Roll Hall of Fame in 1988 as a member of the Beatles and again as a solo artist in 1999. In 1979, the Guinness Book of World Records recognised McCartney as the “most honored composer and performer in music”, with 60 gold discs (43 with the Beatles, 17 with Wings) and, as a member of the Beatles, sales of over 100 million singles and 100 million albums, and as the “most successful song writer”, he wrote jointly or solo 43 songs which sold one million or more records between 1962 and 1978. In 2009, Guinness World Records again recognised McCartney as the “most successful songwriter” having written or co-written 188 charted records in the United Kingdom, of which 91 reached the top 10 and 33 made it to number one.

Credited with more number ones in the UK than any other artist, McCartney has participated in twenty-four chart topping singles: seventeen with the Beatles, one solo, and one each with Wings, Stevie Wonder, Ferry Aid, Band Aid, Band Aid 20 and “The Christians et al.” He is the only artist to reach the UK number one as a soloist (“Pipes of Peace”), duo (“Ebony and Ivory” with Wonder), trio (“Mull of Kintyre”, Wings), quartet (“She Loves You”, the Beatles), quintet (“Get Back”, the Beatles with Billy Preston) and as part of a musical ensemble for charity (Ferry Aid).

“Yesterday” is one of the most covered songs in history with more than 2,200 recorded versions, and according to the BBC, “the track is the only one by a UK writer to have been aired more than seven million times on American TV and radio and is third in the all-time list … [and] is the most played song by a British writer [last] century in the US”. His 1968 Beatles composition “Hey Jude” achieved the highest sales in the UK that year and topped the US charts for nine weeks, which is longer than any other Beatles single. It was also the longest single released by the band and, at seven minutes eleven seconds, was at that time the longest number one. “Hey Jude” is the best-selling Beatles single, achieving sales of over five million copies soon after its release.

In July 2005, McCartney’s performance of “Sgt. Pepper’s Lonely Hearts Club Band” with U2 at Live 8 became the fastest-released single in history. Available within forty-five minutes of its recording, hours later it had achieved number one on the UK Official Download Chart.

The Fireman (McCartney and Youth)

The contents of this page are sourced from Wikipedia article on 28 July 2020. The contents are available under the CC BY-SA 4.0 license.