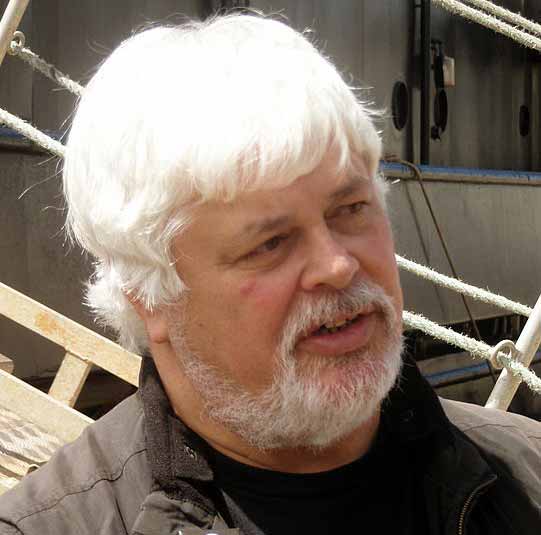 The Toronto native joined a Sierra Club protest against nuclear testing in 1969. He was a co-founder of Greenpeace, crewed and skippered for it and a founding board member in 1972. He has been credited by The New York Times, The New Yorker, and other publications with being a founder of Greenpeace. The documentary How to Change the World shows that Watson was indeed one of the original founding members of Greenpeace. Because Watson argued for a strategy of direct action that conflicted with the Greenpeace interpretation of nonviolence, he was ousted from the board in 1977 and subsequently left the organization. That same year, he formed the Sea Shepherd Conservation Society. The group was the subject of a reality show named Whale Wars.

He promotes veganism, and a biocentric, rather than anthropocentric, worldview.

Watson’s activities have led to legal action from authorities in countries including the United States, Canada, Norway, Costa Rica and Japan. He was detained in Germany on an extradition request by Costa Rica in May 2012. The Interpol red notice was issued on September 14, 2012, at the request of Japan and Costa Rica.

After staying at sea for 15 months, he returned to Los Angeles late October 2013, going through customs and “was not arrested”. He appeared before a US appeals court on November 6, 2013, stating that neither he nor Sea Shepherd violated a 2012 order requiring them to leave whaling vessels alone. Although the United States is a signatory member of Interpol, Watson has not been detained for extradition to Japan or Costa Rica. He is living in Vermont, writing books. He was in Paris since July 1, 2014 but has since returned to USA.

In March 2019, Costa Rica dropped all charges against Watson and has removed the Interpol red notice.

According to the Sea Shepherd Conservation Society, Paul Watson was born in Toronto to Anthony Joseph Watson and Annamarie Larsen, and grew up in St. Andrews, New Brunswick, along with two sisters and three brothers. As a child he was a member of the Kindness Club, which he has credited with teaching him to “respect and defend animals”. After working as a tour guide at Expo 67, the World’s Fair that took place in Montreal in 1967, Watson moved to Vancouver.

According to the Sea Shepherd Conservation Society, in 1968 and the early 1970s, he joined the Canadian Coast Guard, where he served aboard weatherships, search and rescue hovercraft, and buoy tenders. He signed up as a merchant seaman in 1969 with the Norwegian Consulate in Vancouver and shipped out on the 35,000 ton bulk carrier Bris as a deck hand. The Bris was registered in Oslo, Norway and manifested for the Indian Ocean and Pacific trade.

Watson has one daughter Lilliolani (born 1980) with his first wife, Starlet Lum, who was a founding director of Greenpeace Quebec, Earthforce!, Project Wolf, and Sea Shepherd. His second wife, Lisa Distefano, a former Playboy model, was Sea Shepherd’s Director of Operations during the Makah anti-whaling campaigns in Friday Harbor. His third wife, Allison Lance, is an animal rights activist and a volunteer crew member of Sea Shepherd. Watson has two grandchildren. Watson married his fourth wife Yana Rusinovich on February 14, 2015, in Paris, France. Watson and Rusinovich had a son, Tiger, on September 29, 2016. He ran for parliament in Canada’s federal elections twice.

Reactions to activism and leadership

Watson has stated that he does not consider himself a ‘protester’, but an ‘interventionist’, as he considers protesting as too submissive. He often takes the attitude that he represents (or stands in for) law enforcement which is either unwilling or unable to enforce existing laws.

His leadership style has variously been called arrogant, as well as pushing himself too much “front and center”, which was cited as one of the reasons for expulsion from Greenpeace. The atmosphere aboard his vessels has been compared to an “anarchy run by God”.

The former member of Sea Shepherd and captain of the MY Ady Gil Pete Bethune described Watson as “morally bankrupt” who would order the intentional sinking of his own ships like the Ady Gil as a means to “garner sympathy with the public and to create better TV”. Watson denied this, saying “No one ordered him to scuttle it. Pete Bethune was captain of the Ady Gil; all decisions on the Ady Gil were his.”

Paul Watson received the Jules Verne Award on October 10, 2012. He was the second person after Captain Jacques Cousteau to be honored with a Jules Verne Award dedicated to environmentalists and adventurers. On June 28, 2010 Paul received the Asociación de Amigos del Museo de Anclas Philippe Cousteau: Defense of Marine Life Award, in recognition of his merits achieved by the work done in defense of marine life. In 2002, Paul was inducted into the US Animal Rights Hall of Fame for his outstanding contributions to animal liberation. Paul received the George H. W. Bush Daily Points of Light Award in 1999 and in 2000, he was named one of Time Magazine’s Top 20 Environmental Heroes of the 20th Century. On May 23rd, 2019, Captain Paul Watson received an official commendation by Connecticut Governor Ned Lamont stating that the “State of Connecticut conveyed both honor and recognition to Captain Paul Watson.” In 2007 Captain Watson received the Amazon Peace Prize presented by the Vice President of Ecuador Lenin Moreno.

A biographical documentary on Paul Watson’s early life and background entitled Pirate for the Sea was produced by Ron Colby in 2008. The 2008 documentary At the Edge of the World chronicled the efforts of Watson and 45 volunteers to hinder the Japanese whaling fleet in the waters around Antarctica. In 2010, long time friend and filmmaker Peter Brown released the documentary Confessions of an Eco-Terrorist, a satirical look back at the last 30 years of actions. The documentary Eco-Pirate: The Story of Paul Watson from 2011 features interviews and footage with early Greenpeace members Rex Weyler and Patrick Moore.

Watson, Whale Wars, and the Japanese whaling industry were satirized in the South Park episode “Whale Whores”. In its fictional Larry King show, Watson himself was called “An unorganized incompetent media whore who thought lying to everyone was OK as long as it served his cause” and “A smug, narcoleptic liar with no credibility”. Watson responded to the South Park episode by stating; “My understanding is that the Japanese Prime Minister was not amused and the whalers and dolphin killers are enraged at the way they were portrayed,” Watson said. “That’s music to my ears. If the humorless whale killers and the bank rollers of the dolphin killers did not like the show, then that’s all I need to applaud it.”

Watson was portrayed (along with whale biologist, Nan Hauser), during a 60 Minutes episode that aired in 2013, as contributing to the return of the Humpback whale populations in the South Pacific.

In 2019 a biopic film called, “Watson” from the Director of Inconvenient Truth, “Lesley Chilcott” was released and also aired on Animal Planet on December 22nd, 2019.