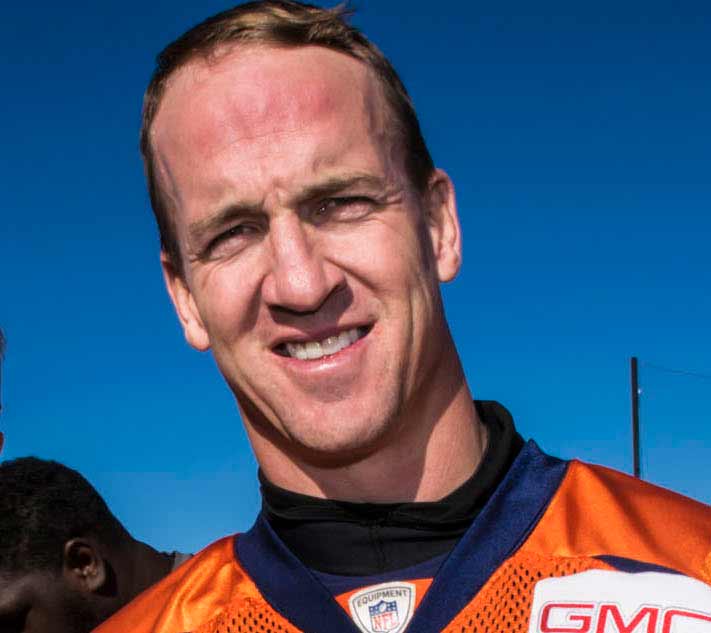 Peyton Williams Manning (born March 24, 1976) is an American former professional football quarterback who played in the National Football League (NFL) for 18 seasons. Considered one of the greatest quarterbacks of all time, he spent 14 seasons with the Indianapolis Colts and his final four seasons with the Denver Broncos. He played college football for the University of Tennessee, leading the Tennessee Volunteers to the 1997 SEC Championship Game in his senior season. He is the second son of former NFL quarterback Archie Manning and older brother of former NFL quarterback Eli Manning.

Manning was selected by the Colts as the first overall pick in the 1998 NFL Draft. From 1998 to 2010, he improved the fortunes of the struggling Colts franchise and helped transform them into consistent playoff contenders. During his tenure as starting quarterback, Manning led the team to eight division championships, two AFC championships, and one Super Bowl title in Super Bowl XLI—the franchise’s first in over three decades, and their first since relocating to Indianapolis.

After undergoing neck surgery that sidelined him for the 2011 season, Manning was released by the Colts and signed with the Broncos. Serving as the team’s starting quarterback from 2012 to 2015, he contributed to the Broncos clinching their division each year, and his career concluded with a victory in Super Bowl 50.

Manning holds many NFL records, including AP MVP awards (5), Pro Bowl appearances (14), 4,000-yard passing seasons (14), single-season passing yards (5,477 in 2013), and single-season passing touchdowns (55 in 2013). He is also tied with Sammy Baugh for the most first-team All-Pro selections for a quarterback (7), and is third in career passing yards (71,940) and passing touchdowns (539). A two-time Super Bowl winner and the most valuable player of Super Bowl XLI, Manning is the only starting quarterback to have multiple appearances and win the Super Bowl with more than one franchise.

Nicknamed “The Sheriff” due to his tendency to audible prior to the snap, Manning was one of the most recognizable and parodied players in the NFL. Teams led by Manning typically used the hurry-up offense in place of the standard huddle.

High school career
Manning attended Isidore Newman School in New Orleans, Louisiana, and led the Greenies football team to a 34–5 record during his three seasons as the starter. He was named Gatorade Circle of Champions National Player-of-the-Year and Columbus (Ohio) Touchdown Club National Offensive Player-of-the-Year in 1993. While at Newman, he began wearing the #18 jersey in honor of his older brother Cooper, who was forced to give up football due to spinal stenosis. Younger brother Eli also wore the number when he became starting quarterback. Newman has since retired the #18 jersey and it can be seen hanging in the school gym. Manning was among the most sought after high school players in the country and was recruited by about 60 colleges, led by Florida, Florida State, LSU, Michigan, Tennessee, Texas, Texas A&M, and his father’s alma mater Ole Miss.

College career
Manning chose to play college football for the University of Tennessee Volunteers under head coach Phillip Fulmer. Many fans were surprised that he did not pick the Ole Miss Rebels, for whom his father Archie played, and Peyton’s parents received several angry phone calls and letters. He became Tennessee’s all-time leading passer with 11,201 yards and 89 touchdowns and won 39 of 45 games as a starter, breaking the Southeastern Conference (SEC) record for career wins.