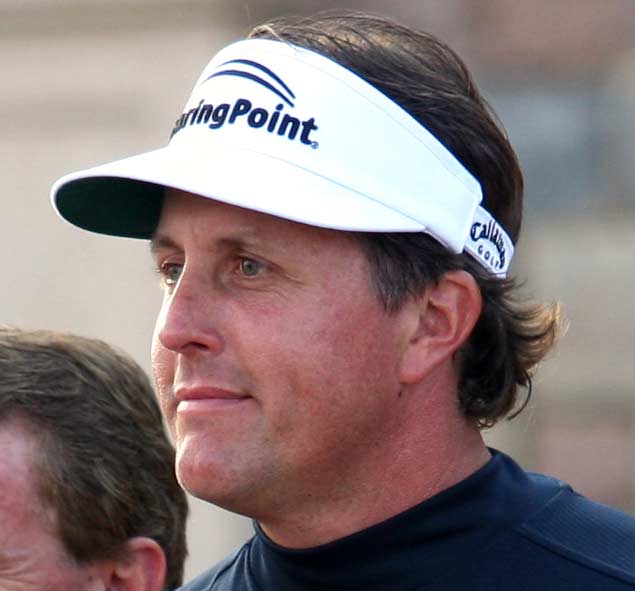 Mickelson is one of 12 players in the history of golf to win three of the four majors. He has won every major except the U.S. Open, where he has finished runner-up a record six times.

Mickelson has spent over 25 consecutive years in the top 50 of the Official World Golf Ranking. He has spent over 700 weeks in the top-10, has reached a career-high world ranking of No. 2 several times and is a life member of the PGA Tour. Known for his left-handed swing, even though otherwise right-handed, he learned by mirroring his right-handed father’s swing. He was inducted into the World Golf Hall of Fame in 2012.

Mickelson was born in San Diego, California, to parents Philip Mickelson (an airline pilot and former naval aviator) and Mary Mickelson (née Santos); he was raised there and in Scottsdale, Arizona. Mickelson is of Portuguese and Sicilian descent on his mother’s side. His maternal grandfather, Alfred Santos (also Mickelson’s middle name) was a caddie at Pebble Beach Golf Links and took Phil golfing as a child. Although otherwise right-handed, he played golf left-handed since he learned by watching his right-handed father swing, mirroring his style. Mickelson began golf under his father’s instruction before starting school. Phil Sr.’s work schedule as a commercial pilot allowed them to play together several times a week and young Phil honed his creative short game on an extensive practice area in their San Diego backyard. Mickelson graduated from the University of San Diego High School in 1988.

As a competitor, Mickelson’s playing style is described by many as “aggressive” and highly social. His strategy toward difficult shots (bad lies, obstructions) would tend to be considered risky.

Mickelson has also been characterized by his powerful and sometimes inaccurate driver, but his excellent short game draws the most positive reviews, most of all his daring “Phil flop” shot in which a big swing with a high-lofted wedge against a tight lie flies a ball high into the air for a short distance.

Mickelson is usually in the top 10 in scoring, and he led the PGA Tour in birdie average as recently as 2013.