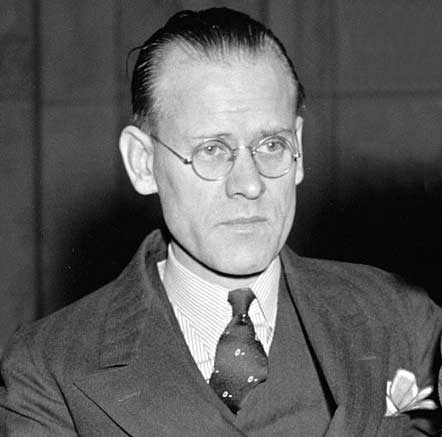 Known for: Inventor of the first fully electronic television; over 169 United States and foreign patents

Philo Taylor Farnsworth (August 19, 1906 – March 11, 1971) was an American inventor and television pioneer. He made many crucial contributions to the early development of all-electronic television. He is best known for his 1927 invention of the first fully functional all-electronic image pickup device (video camera tube), the image dissector, as well as the first fully functional and complete all-electronic television system. Farnsworth developed a television system complete with receiver and camera—which he produced commercially through the Farnsworth Television and Radio Corporation from 1938 to 1951, in Fort Wayne, Indiana.

In later life, Farnsworth invented a small nuclear fusion device, the Farnsworth–Hirsch fusor, employing inertial electrostatic confinement (IEC). It was not a practical device for generating nuclear power, though it provides a viable source of neutrons.[9] The design of this device has been the inspiration for other fusion approaches, including the Polywell reactor concept. Farnsworth held 300 patents, mostly in radio and television.

Farnsworth was born August 19, 1906 , the eldest of five children of Lewis Edwin Farnsworth and Serena Amanda Bastian, a Latter-day Saint couple living in a small log cabin built by Lewis’s father near Beaver, Utah. In 1918, the family moved to a relative’s 240-acre (1.0 km2) ranch near Rigby, Idaho, where his father supplemented his farming income by hauling freight with his horse-drawn wagon. Philo was excited to find that his new home was wired for electricity, with a Delco generator providing power for lighting and farm machinery. He was a quick student in mechanical and electrical technology, repairing the troublesome generator. He found a burned-out electric motor among some items discarded by the previous tenants and rewound the armature; he converted his mother’s hand-powered washing machine into an electric-powered one. He developed an early interest in electronics after his first telephone conversation with a distant relative, and he discovered a large cache of technology magazines in the attic of their new home. He won $25 in a pulp-magazine contest for inventing a magnetized car lock. Farnsworth was a member of The Church of Jesus Christ of Latter-day Saints.

Farnsworth excelled in chemistry and physics at Rigby High School. He asked science teacher Justin Tolman for advice about an electronic television system that he was contemplating; he provided the teacher with sketches and diagrams covering several blackboards to show how it might be accomplished electronically, and Tolman encouraged him to develop his ideas. One of the drawings that he did on a blackboard for his chemistry teacher was recalled and reproduced for a patent interference case between Farnsworth and RCA.

In 1923, the family moved to Provo, Utah, and Farnsworth attended Brigham Young High School that fall. His father died of pneumonia in January 1924 at age 58, and Farnsworth assumed responsibility for sustaining the family while finishing high school. After graduating BYHS in June 1924, he applied to the United States Naval Academy in Annapolis, Maryland, where he earned the nation’s second-highest score on academy recruiting tests. However, he was already thinking ahead to his television projects; he learned that the government would own his patents if he stayed in the military, so he obtained an honorable discharge within months of joining under a provision in which the eldest child in a fatherless family could be excused from military service to provide for his family. He returned to Provo and enrolled at Brigham Young University, but he was not allowed by the faculty to attend their advanced science classes based upon policy considerations. He attended anyway and made use of the university’s research labs, and he earned a Junior Radio-Trician certification from the National Radio Institute, with a full certification in 1925. While attending college, he met Provo High School student Elma “Pem” Gardner, (February 25, 1908 – April 27, 2006), whom he eventually married.

Farnsworth worked while his sister Agnes took charge of the family home and the second-floor boarding house, with the help of a cousin living with the family. The Farnsworths later moved into half of a duplex, with family friends the Gardners moving into the other side when it became vacant. He developed a close friendship with Pem’s brother Cliff Gardner, who shared his interest in electronics, and the two moved to Salt Lake City to start a radio repair business. The business failed, and Gardner returned to Provo.

Farnsworth remained in Salt Lake City and became acquainted with Leslie Gorrell and George Everson, a pair of San Francisco philanthropists who were then conducting a Salt Lake City Community Chest fund-raising campaign. They agreed to fund his early television research with an initial $6,000 in backing, and set up a laboratory in Los Angeles for Farnsworth to carry out his experiments.

Farnsworth married Pem on May 27, 1926, and the two traveled to Berkeley, California, in a Pullman coach. They moved across the bay to San Francisco where Farnsworth set up his new lab at 202 Green Street. It was at this time that he received his first television patent.

Farnsworth worked out the principle of the image dissector in the summer of 1921, not long before his 15th birthday, and demonstrated the first working version on September 7, 1927, having turned 21 the previous August. A farm boy, his inspiration for scanning an image as series of lines came from the back-and-forth motion used to plow a field. In the course of a patent interference suit brought by the Radio Corporation of America in 1934 and decided in February 1935, his high school chemistry teacher, Justin Tolman, produced a sketch he had made of a blackboard drawing Farnsworth had shown him in spring 1922. Farnsworth won the suit; RCA appealed the decision in 1936 and lost. Farnsworth received royalties from RCA, but he never became wealthy. The video camera tube that evolved from the combined work of Farnsworth, Zworykin, and many others was used in all television cameras until the late 20th century, when alternate technologies such as charge-coupled devices began to appear.

Farnsworth also developed the “image oscillite”, a cathode ray tube that displayed the images captured by the image dissector.

Farnsworth called his device an image dissector because it converted individual elements of the image into electricity one at a time. He replaced the spinning disks with caesium, an element that emits electrons when exposed to light.

In 1984, Farnsworth was inducted into the National Inventors Hall of Fame.

The Farnsworth–Hirsch fusor is an apparatus designed by Farnsworth to create nuclear fusion. Unlike most controlled fusion systems, which slowly heat a magnetically confined plasma, the fusor injects high-temperature ions directly into a reaction chamber, thereby avoiding a considerable amount of complexity.

When the Farnsworth-Hirsch fusor was first introduced to the fusion research world in the late 1960s, the fusor was the first device that could clearly demonstrate it was producing fusion reactions at all. Hopes at the time were high that it could be quickly developed into a practical power source. However, as with other fusion experiments, development into a power source has proven difficult. Nevertheless, the fusor has since become a practical neutron source and is produced commercially for this role.

At the time he died, Farnsworth held 300 U.S. and foreign patents. His inventions contributed to the development of radar, infra-red night vision devices, the electron microscope, the baby incubator, the gastroscope, and the astronomical telescope.