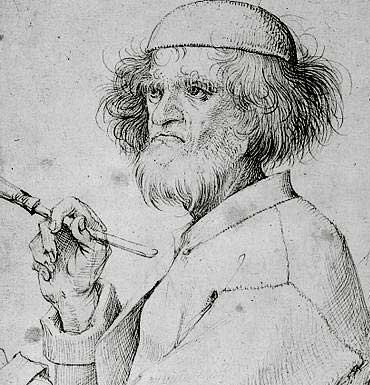 Pieter Bruegel (1525–1530 – 9 September 1569) was the most significant artist of Dutch and Flemish Renaissance painting, a painter and printmaker from Brabant, known for his landscapes and peasant scenes (so-called genre painting); he was a pioneer in making both types of subject the focus in large paintings.

Art historians guess he was either born in Breda or Breugel (a village in the municipality of Son en Breugel), both located in the present-day Dutch province of North Brabant. He was a formative influence on Dutch Golden Age painting and later painting in general in his innovative choices of subject matter, as one of the first generation of artists to grow up when religious subjects had ceased to be the natural subject matter of painting. He also painted no portraits, the other mainstay of Netherlandish art. After his training and travels to Italy, he returned in 1555 to settle in Antwerp, where he worked mainly as a prolific designer of prints for the leading publisher of the day. Only towards the end of the decade did he switch to make painting his main medium, and all his famous paintings come from the following period of little more than a decade before his early death, when he was probably in his early forties, and at the height of his powers.

As well as looking forwards, his art reinvigorates medieval subjects such as marginal drolleries of ordinary life in illuminated manuscripts, and the calendar scenes of agricultural labours set in landscape backgrounds, and puts these on a much larger scale than before, and in the expensive medium of oil painting. He does the same with the fantastic and anarchic world developed in Renaissance prints and book illustrations.

He is sometimes referred to as “Peasant Bruegel”, to distinguish him from the many later painters in his family, including his son Pieter Brueghel the Younger (1564–1638). From 1559, he dropped the ‘h’ from his name and signed his paintings as Bruegel; his relatives continued to use “Brueghel” or “Breughel”.

The two main early sources for Bruegel’s biography are Lodovico Guicciardini’s account of the Low Countries (1567) and Karel van Mander’s 1604 Schilder-boeck. Guicciardini recorded that Bruegel was born in Breda, but Van Mander specified that Bruegel was born in a village (dorp) near Breda called “Brueghel”, which does not fit any known place. Nothing at all is known of his family background. Van Mander seems to assume he came from a peasant background, in keeping with the over-emphasis on Bruegel’s peasant genre scenes given by van Mander and many early art historians and critics.

In contrast, scholars of the last sixty years have emphasized the intellectual content of his work, and conclude: “There is, in fact, every reason to think that Pieter Bruegel was a townsman and a highly educated one, on friendly terms with the humanists of his time”, ignoring Van Mander’s dorp and just placing his childhood in Breda itself. Breda was already a significant centre as the base of the House of Orange-Nassau, with a population of some 8,000, although 90% of the 1300 houses were destroyed in a fire in 1534. However, this reversal can be taken to excess; although Bruegel moved in highly educated humanist circles, it seems “he had not mastered Latin”, and had others add the Latin captions in some of his drawings.

From the fact that Bruegel entered the Antwerp painters’ guild in 1551, it is inferred that he was born between 1525 and 1530. His master, according to Van Mander, was the Antwerp painter Pieter Coecke van Aelst, whose daughter Mayken Coecke Bruegel married in 1563.

Between 1545 and 1550 he was a pupil of Pieter Coecke, who died on 6 December 1550. However, before this, Bruegel was already working in Mechelen, where he is documented between September 1550 and October 1551 assisting Peeter Baltens on an altarpiece (now lost), painting the wings in grisaille. Bruegel possibly got this work via the connections of Mayken Verhulst, the wife of Pieter Coecke. Mayken’s father and eight siblings were all artists or married an artist, and lived in Mechelen.

Around 1563 Bruegel moved from Antwerp to Brussels, in Brussels he married Mayken Coecke, the daughter of the painter Pieter Coecke van Aelst and Mayken Verhulst. As registered in the archives of the Cathedral of Antwerp, their deposition for marriage was registered 25 July, 1563. The marriage itself was concluded in the Chapel Church, Brussels in 1563.

Pieter the Elder had two sons: Pieter Brueghel the Younger and Jan Brueghel the Elder (both kept their name as Brueghel). Their grandmother, Mayken Verhulst, trained the sons because “the Elder” died when both were very small children. The older brother, Pieter Brueghel copied his father’s style and compositions with competence and considerable commercial success. Jan was much more original, and very versatile. He was an important figure in the transition to the Baroque style in Flemish Baroque painting and Dutch Golden Age painting in a number of its genres. He was often a collaborator with other leading artists, including with Peter Paul Rubens on many works including the Allegory of Sight.

Other members of the family include Pieter Coecke van Aelst and Mayken Verhulst (father-in-law and mother-in-law to Pieter Bruegel the Elder), Jan van Kessel the Elder (grandson of Jan Bruegel the Elder) and Jan van Kessel the Younger. Through David Teniers, the family is also related to the whole Teniers family of painters and the Quellinus family of painters and sculptors, since Jan-Erasmus Quellinus married Cornelia, daughter of David Teniers the Younger.