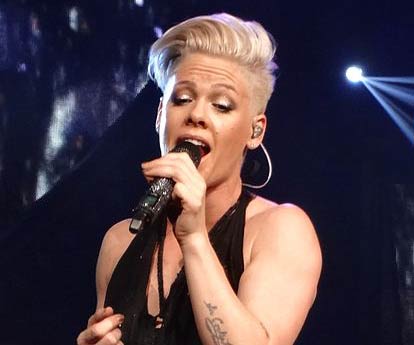 Alecia Beth Moore (born September 8, 1979), better known by her stage name Pink (stylized as P!nk), is an American singer, songwriter, dancer, actress, record producer, spokesperson, and model. She was originally a member of the girl group Choice. In 1995, LaFace Records saw potential in P!nk and offered her a solo recording contract. Her R&B-influenced debut studio album Can’t Take Me Home (2000) was certified double-platinum in the United States and spawned two Billboard Hot 100 top-ten songs: “There You Go” and “Most Girls”. She gained further recognition with the collaborative single “Lady Marmalade” from the Moulin Rouge! soundtrack, which topped many charts worldwide. Refocusing her sound to pop rock with her second studio album Missundaztood (2001), the album sold more than 13 million copies worldwide and yielded the international number-one songs “Get the Party Started”, “Don’t Let Me Get Me”, and “Just Like a Pill”.

While P!nk’s third studio album, Try This (2003), sold fewer copies than her previous work, it earned her the Grammy Award for Best Female Rock Vocal Performance for the single “Trouble”. She returned to the top of record charts with her fourth and fifth studio albums, I’m Not Dead (2006) and Funhouse (2008), which generated the top-ten entries “Who Knew” and “U + Ur Hand”, as well as the number-one single “So What”. Pink’s sixth studio album, The Truth About Love (2012), was her first album to debut atop the Billboard 200 chart and spawned her fourth number-one single, “Just Give Me a Reason”. In 2014, Pink recorded a collaborative album, Rose Ave., with Canadian musician Dallas Green under a folk music duo named You+Me. Her seventh studio album, Beautiful Trauma (2017), became the third best-selling album of the year and saw the success of its lead single, “What About Us”.

Recognized for her distinctive, raspy voice and acrobatic stage presence, Pink has sold over 90 million records worldwide, making her one of the world’s best-selling music artists. Her career accolades include three Grammy Awards, two Brit Awards, a Daytime Emmy Award and seven MTV Video Music Awards, including the Michael Jackson Video Vanguard Award. In 2009, Billboard named Pink the Pop Songs Artist of the Decade. Pink was also the second most-played female solo artist in the United Kingdom during the 2000s decade, behind only Madonna. VH1 ranked her number 10 on their list of the 100 Greatest Women in Music, while Billboard awarded her the Woman of the Year award in 2013. At the 63rd annual BMI Pop Awards, she received the BMI President’s Award for “her outstanding achievement in songwriting and global impact on pop culture and the entertainment industry.”

Alecia Beth Moore was born on September 8, 1979, in Doylestown, Pennsylvania, to emergency room nurse Judith “Judy” Moore (née Kugel) and insurance salesman James “Jim” Moore. She has described herself as an “Irish-German-Lithuanian-Jew”, and self-identifies as Jewish. Although a healthy baby at birth, she quickly developed asthma that plagued her through her early years. When Pink was a toddler, her parents began having marital problems and divorced before she was 10.

Pink was trained as a competitive gymnast between the ages 4 and 12. She developed her voice early in life. She attended Central Bucks High School West. In high school, Pink joined her first band, Middleground, but it disbanded upon losing a battle of the bands competition. As a teenager, she wrote lyrics as an outlet for her feelings, and her mother commented, “Her initial writings were always very introspective. Some of it was very black, and very deep, almost worrisome.”

Pink began performing in Philadelphia clubs when she was about 14 years old. She adopted her stagename, “Pink”, around this time. She had that nickname for quite some time by that point, and initially it had been “a mean thing”. She took that name from the character “Mr. Pink” in Quentin Tarantino’s film Reservoir Dogs. At 14, she was convinced to audition to become a member of the all-female group Basic Instinct, and earned a spot in the lineup. Ultimately, the group disbanded without releasing any material. At 16, Pink and two other teenage girls, Sharon Flanagan and Chrissy Conway, formed the R&B group Choice. A copy of their first song, “Key to My Heart”, was sent to LaFace Records in Atlanta, Georgia, where L.A. Reid overheard it and arranged for the group to fly there so he could see them perform. After that, he signed them to a record deal. Since the three girls were under 18 at the time, their parents had to cosign the contract. The group relocated to Atlanta and recorded an album, which was never released, but “Key to My Heart” appeared on the soundtrack to the 1996 film Kazaam. During a Christmas party, Reid gave Pink an ultimatum: go solo or go home. Choice disbanded in 1998.

Aside from her music, Pink has been noted for her fashion style, such the “adventurous” hairstyles she has worn, which have included fluorescent spikes to pink-streaked dreadlocks to a pitch-black skater cut. Regarding her style, she told InStyle, “I’m eclectic. I’m a tomboy, but I’m kind of a hippie and kind of a gangster I don’t know if that’s a good thing, but it is my thing.”

Pink is an animal-rights activist and a prominent campaigner for PETA, contributing her voice toward causes such as the protest against KFC. In conjunction with PETA, she criticized the Australian wool industry over its use of mulesing. In January 2007, she stated that she had been misled by PETA about mulesing and that she had not done enough research before lending her name to the campaign. Her campaigning led to a headlining concert called PAW (Party for Animals Worldwide) in Cardiff, Wales on August 21, 2007. In 2015, she posed nude for PETA’s “I’d Rather Go Naked Than Wear Fur”, campaign.

Pink is also outspoken about LGBT rights and supports same-sex marriage. In October 2012, Pink told The Advocate that she does not define her sexuality saying, “I never felt the need to.”

Pink is also involved with several charities, including Human Rights Campaign, ONE Campaign, Prince’s Trust, New York Restoration Project, Run for the Cure Foundation, Save the Children, Take Back the Night, UNICEF and World Animal Protection. As of May 2008, Pink has been officially recognized as an advocate for the RSPCA in Australia. On February 16, 2009, Pink announced she was donating $250,000 to the Red Cross Bushfire Appeal to aid the victims of the bushfires that swept through the Australian state of Victoria earlier that month. Pink stated that she wanted to make “a tangible expression of support”. Pink also donated money to Autism Speaks.

In August 2012, Pink became a spokesmodel for CoverGirl, featuring in a fall 2013 advertising campaign themed “beauty with an edge”.

On August 21, 2018, Pink stopped her concert in Brisbane for a grieving fan. A girl named Leah lost her mother one month prior to the concert, and she and her family hung up signs all around the concert, saying “My name is Leah – I’m 14 years old. I lost my beautiful Mum last month. I would LOVE a hug… Please!”. The signs grabbed the attention of Pink.

Pink met professional motocross racer Carey Hart at the 2001 X Games in Philadelphia. Following a brief separation in 2003, Pink proposed to Hart in June 2005 during a Mammoth Lakes motocross race; she was “assisting” in his race and wrote “Will You Marry Me? I’m serious!” on a pit board. He initially didn’t notice and continued on for another lap. When he did notice later, he veered off the track to accept right then. She then made him finish the race. They married in Costa Rica on January 7, 2006.

After months of speculation, Pink announced in February 2008, that she and Hart had separated. Hart subsequently appeared in the video for her 2008 song “So What”, which deals with their separation. The couple sought marriage counseling during their separation in hopes of reconciliation. In February 2010, Pink confirmed that she and Hart were back together. Hart also appears with Pink in the music video for her songs “Just Give Me a Reason”, “True Love”, and “Just like Fire”.

On April 4, 2020, Pink announced that she and her three-year-old son, Jameson, showed symptoms for COVID-19 amidst the 2019–2020 coronavirus pandemic, and she subsequently tested positive then fully recovered. She also announced donations of $500,000 each to the Temple University Hospital Fund in Philadelphia, where her mother worked for nearly two decades, and the City of Los Angeles Mayor’s Emergency COVID-19 Crisis Fund.