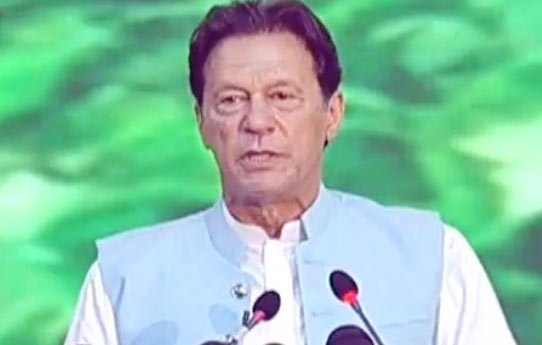 Prime Minister Imran Khan has said that if we do not make timely and correct decision, the challenge of food security in the country will become a national security issue.

Addressing the National Farmers Convention in Islamabad, the Prime Minister said that a nation whose 20 per cent people are starving cannot develop and lags behind in the world race.

He said that food security is in fact national security as 40% children in the country are suffering from malnutrition.
The Prime Minister said that most of the milk being sold in the country is not pure and even the most essential thing for growth is not being given to the children but when we were a little strict in this regard, we increased the price of milk. Gone.

Prime Minister Imran Khan said that after independence, everyone had to be included in the development of the country, which unfortunately did not happen and became separate hospitals and schools for the common man and the rich.

He said that due to untimely decision of lands, occupation groups were formed and weak man was killed everywhere.

The Prime Minister said that the same thing happened in the field of agriculture and since the farmers did not have money, they could not compete with the big people.

“We have become accustomed to foreign aid and loans, so we have never tried to be self-sufficient,”

The Prime Minister said that we have never tried to do agriculture in modern ways otherwise any kind of crop can be grown in this country.
He said that work has been started on best seeds and agricultural research and work is also being done on modern machinery including agriculture in C-Pack.

The Prime Minister said that interest free loans and training would be given to small farmers for the betterment of agriculture in the country.

“The olive revolution is coming to the integrated districts of Khyber Pakhtunkhwa and we will become its exporters instead of importing olives in a few years,”

In Aryan case, on the advice of Salman, Shah Rukh changed his lawyer.

Actress Veena Malik suffers from corona and quarantines herself at home.