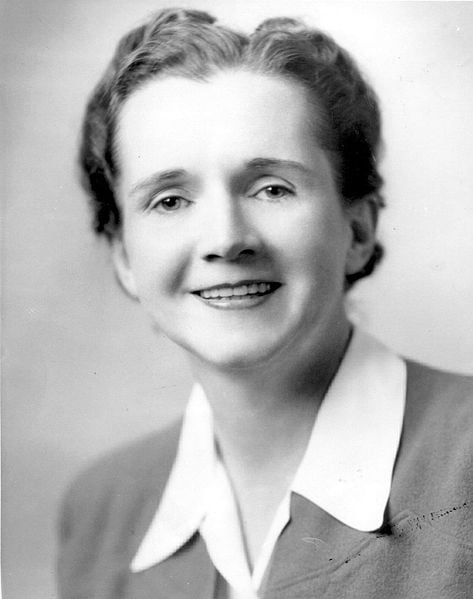 Rachel Louise Carson (May 27, 1907 – April 14, 1964) was an American marine biologist, author, and conservationist whose book Silent Spring and other writings are credited with advancing the global environmental movement.

Carson began her career as an aquatic biologist in the U.S. Bureau of Fisheries, and became a full-time nature writer in the 1950s. Her widely praised 1951 bestseller The Sea Around Us won her a U.S. National Book Award, recognition as a gifted writer, and financial security. Her next book, The Edge of the Sea, and the reissued version of her first book, Under the Sea Wind, were also bestsellers. This sea trilogy explores the whole of ocean life from the shores to the depths.

Late in the 1950s, Carson turned her attention to conservation, especially some problems that she believed were caused by synthetic pesticides. The result was the book Silent Spring (1962), which brought environmental concerns to an unprecedented share of the American people. Although Silent Spring was met with fierce opposition by chemical companies, it spurred a reversal in national pesticide policy, which led to a nationwide ban on DDT and other pesticides. It also inspired a grassroots environmental movement that led to the creation of the U.S. Environmental Protection Agency. Carson was posthumously awarded the Presidential Medal of Freedom by President Jimmy Carter.

Rachel Carson was born on May 27, 1907, on a family farm near Springdale, Pennsylvania, just up the Allegheny River from Pittsburgh. She was the daughter of Maria Frazier (McLean) and Robert Warden Carson, an insurance salesman. She spent a lot of time exploring around her family’s 65-acre (26 ha) farm. An avid reader, she began writing stories (often involving animals) at age eight and had her first story published at age ten. She especially enjoyed the St. Nicholas Magazine (which carried her first published stories), the works of Beatrix Potter, and the novels of Gene Stratton-Porter, and in her teen years, Herman Melville, Joseph Conrad and Robert Louis Stevenson. The natural world, particularly the ocean, was the common thread of her favorite literature. Carson attended Springdale’s small school through tenth grade, then completed high school in nearby Parnassus, Pennsylvania, graduating in 1925 at the top of her class of forty-four students.

At the Pennsylvania College for Women (today known as Chatham University), as in high school, Carson was somewhat of a loner. She originally studied English, but switched her major to biology in January 1928, though she continued contributing to the school’s student newspaper and literary supplement. Though admitted to graduate standing at Johns Hopkins University in 1928, she was forced to remain at the Pennsylvania College for Women for her senior year due to financial difficulties; she graduated magna cum laude in 1929. After a summer course at the Marine Biological Laboratory, she continued her studies in zoology and genetics at Johns Hopkins in the fall of 1929.

After her first year of graduate school, Carson became a part-time student, taking an assistantship in Raymond Pearl’s laboratory, where she worked with rats and Drosophila, to earn money for tuition. After false starts with pit vipers and squirrels, she completed a dissertation project on the embryonic development of the pronephros in fish. She earned a master’s degree in zoology in June 1932. She had intended to continue for a doctorate, but in 1934 Carson was forced to leave Johns Hopkins to search for a full-time teaching position to help support her family during the Great Depression. In 1935, her father died suddenly, worsening their already critical financial situation and leaving Carson to care for her aging mother. At the urging of her undergraduate biology mentor Mary Scott Skinker, she settled for a temporary position with the U.S. Bureau of Fisheries, writing radio copy for a series of weekly educational broadcasts entitled Romance Under the Waters. The series of 52 seven-minute programs focused on aquatic life and was intended to generate public interest in fish biology and in the work of the bureau, a task the several writers before Carson had not managed. Carson also began submitting articles on marine life in the Chesapeake Bay, based on her research for the series, to local newspapers and magazines.

Carson’s supervisor, pleased with the success of the radio series, asked her to write the introduction to a public brochure about the fisheries bureau; he also worked to secure her the first full-time position that became available. Sitting for the civil service exam, she outscored all other applicants and, in 1936, became the second woman hired by the Bureau of Fisheries for a full-time professional position, as a junior aquatic biologist.

Weakened from breast cancer and her treatment regimen, Carson became ill with a respiratory virus in January 1964. Her condition worsened, and in February, doctors found that she had severe anemia from her radiation treatments and in March they discovered that the cancer had reached her liver. She died of a heart attack on April 14, 1964, in her home in Silver Spring, Maryland.

Her body was cremated and the ashes buried beside her mother at Parklawn Memorial Gardens, Rockville, Maryland. Some of her ashes were later scattered along the coast of Southport Island, near Sheepscot Bay, Maine.