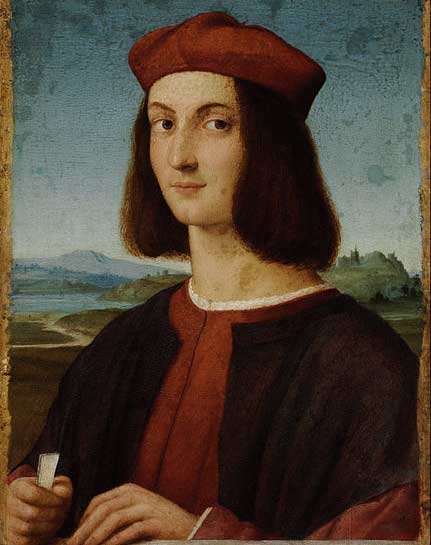 Raffaello Sanzio da Urbino (March 28 or April 6, 1483 – April 6, 1520), was an Italian painter and architect of the High Renaissance. His work is admired for its clarity of form, ease of composition, and visual achievement of the Neoplatonic ideal of human grandeur. Together with Michelangelo and Leonardo da Vinci, he forms the traditional trinity of great masters of that period.

Raphael was enormously productive, running an unusually large workshop and, despite his early death at 37, leaving a large body of work. Many of his works are found in the Vatican Palace, where the frescoed Raphael Rooms were the central, and the largest, work of his career. The best known work is The School of Athens in the Vatican Stanza della Segnatura. After his early years in Rome, much of his work was executed by his workshop from his drawings, with considerable loss of quality. He was extremely influential in his lifetime, though outside Rome his work was mostly known from his collaborative printmaking.

After his death, the influence of his great rival Michelangelo was more widespread until the 18th and 19th centuries, when Raphael’s more serene and harmonious qualities were again regarded as the highest models. His career falls naturally into three phases and three styles, first described by Giorgio Vasari: his early years in Umbria, then a period of about four years (1504–1508) absorbing the artistic traditions of Florence, followed by his last hectic and triumphant twelve years in Rome, working for two Popes and their close associates.

Raphael’s mother Màgia died in 1491 when he was eight, followed on August 1, 1494 by his father, who had already remarried. Raphael was thus orphaned at eleven; his formal guardian became his only paternal uncle Bartolomeo, a priest, who subsequently engaged in litigation with his stepmother. He probably continued to live with his stepmother when not staying as an apprentice with a master. He had already shown talent, according to Vasari, who says that Raphael had been “a great help to his father”. A self-portrait drawing from his teenage years shows his precocity. His father’s workshop continued and, probably together with his stepmother, Raphael evidently played a part in managing it from a very early age. In Urbino, he came into contact with the works of Paolo Uccello, previously the court painter (d. 1475), and Luca Signorelli, who until 1498 was based in nearby Città di Castello.

According to Vasari, his father placed him in the workshop of the Umbrian master Pietro Perugino as an apprentice “despite the tears of his mother”. The evidence of an apprenticeship comes only from Vasari and another source, and has been disputed; eight was very early for an apprenticeship to begin. An alternative theory is that he received at least some training from Timoteo Viti, who acted as court painter in Urbino from 1495. Most modern historians agree that Raphael at least worked as an assistant to Perugino from around 1500; the influence of Perugino on Raphael’s early work is very clear: “probably no other pupil of genius has ever absorbed so much of his master’s teaching as Raphael did”, according to Wölfflin. Vasari wrote that it was impossible to distinguish between their hands at this period, but many modern art historians claim to do better and detect his hand in specific areas of works by Perugino or his workshop. Apart from stylistic closeness, their techniques are very similar as well, for example having paint applied thickly, using an oil varnish medium, in shadows and darker garments, but very thinly on flesh areas. An excess of resin in the varnish often causes cracking of areas of paint in the works of both masters. The Perugino workshop was active in both Perugia and Florence, perhaps maintaining two permanent branches.[20] Raphael is described as a “master”, that is to say fully trained, in December 1500.

His first documented work was the Baronci altarpiece for the church of Saint Nicholas of Tolentino in Città di Castello, a town halfway between Perugia and Urbino. Evangelista da Pian di Meleto, who had worked for his father, was also named in the commission. It was commissioned in 1500 and finished in 1501; now only some cut sections and a preparatory drawing remain. In the following years he painted works for other churches there, including the Mond Crucifixion (about 1503) and the Brera Wedding of the Virgin (1504), and for Perugia, such as the Oddi Altarpiece. He very probably also visited Florence in this period. These are large works, some in fresco, where Raphael confidently marshals his compositions in the somewhat static style of Perugino. He also painted many small and exquisite cabinet paintings in these years, probably mostly for the connoisseurs in the Urbino court, like the Three Graces and St. Michael, and he began to paint Madonnas and portraits. In 1502 he went to Siena at the invitation of another pupil of Perugino, Pinturicchio, “being a friend of Raphael and knowing him to be a draughtsman of the highest quality” to help with the cartoons, and very likely the designs, for a fresco series in the Piccolomini Library in Siena Cathedral. He was evidently already much in demand even at this early stage in his career.