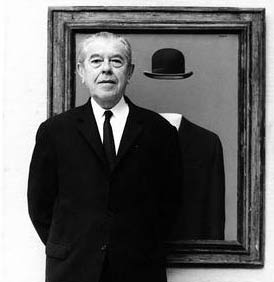 Photo: By http://www.masters-of-photography.com/W/wolleh/wolleh_magritte_full.html, Fair use, https://en.wikipedia.org/w/index.php?curid=20333559

On view: The Museum of Modern Art, The Art Institute of Chicago

René Magritte was born in Lessines, in the province of Hainaut, Belgium, in 1898. He was the oldest son of Léopold Magritte, a tailor and textile merchant, and Régina (née Bertinchamps), who was a milliner before she got married. Little is known about Magritte’s early life. He began lessons in drawing in 1910.

On 12 March 1912, his mother committed suicide by drowning herself in the River Sambre. This was not her first attempt at taking her own life; she had made many over a number of years, driving her husband Léopold to lock her into her bedroom. One day she escaped, and was missing for days. Her body was later discovered a mile or so down the nearby river.

According to a legend, 13-year-old Magritte was present when her body was retrieved from the water, but recent research has discredited this story, which may have originated with the family nurse. Supposedly, when his mother was found, her dress was covering her face, an image that has been suggested as the source of several of Magritte’s paintings in 1927–1928 of people with cloth obscuring their faces, including Les Amants.

Magritte’s earliest paintings, which date from about 1915, were Impressionistic in style. During 1916–1918, he studied at the Académie Royale des Beaux-Arts in Brussels, under Constant Montald, but found the instruction uninspiring. He also took classes at the Académie Royale from the painter and poster designer Gisbert Combaz. The paintings he produced during 1918–1924 were influenced by Futurism and by the figurative Cubism of Metzinger.

From December 1920 until September 1921, Magritte served in the Belgian infantry in the Flemish town of Beverlo near Leopoldsburg. In 1922, Magritte married Georgette Berger, whom he had met as a child in 1913. Also during 1922, the poet Marcel Lecomte showed Magritte a reproduction of Giorgio de Chirico’s “The Song of Love” (painted in 1914). The work brought Magritte to tears; he described this as “one of the most moving moments of my life: my eyes saw thought for the first time.”

In 1922–1923, Magritte worked as a draughtsman in a wallpaper factory, and was a poster and advertisement designer until 1926, when a contract with Galerie Le Centaure in Brussels made it possible for him to paint full-time. In 1926, Magritte produced his first surreal painting, The Lost Jockey (Le jockey perdu), and held his first solo exhibition in Brussels in 1927. Critics heaped abuse on the exhibition.

Depressed by the failure, he moved to Paris where he became friends with André Breton and became involved in the Surrealist group. An illusionistic, dream-like quality is characteristic of Magritte’s version of Surrealism. He became a leading member of the movement, and remained in Paris for three years. In 1929 he exhibited at Goemans Gallery in Paris with Salvador Dalí, Jean Arp, de Chirico, Max Ernst, Joan Miró, Picabia, Picasso and Yves Tanguy.

On 15 December 1929 he participated in the last publication of La Revolution Surrealiste No. 12, where he published his essay “Les mots et les images”, where words play with images in sync with his work The Treachery of images.

Galerie Le Centaure closed at the end of 1929, ending Magritte’s contract income. Having made little impact in Paris, Magritte returned to Brussels in 1930 and resumed working in advertising. He and his brother, Paul, formed an agency which earned him a living wage. In 1932, Magritte joined the Communist Party, which he would periodically leave and rejoin for several years.[9] In 1936 he had his first solo exhibition in the United States at the Julien Levy Gallery in New York, followed by an exposition at the London Gallery in 1938.

During the early stages of his career, the British surrealist patron Edward James allowed Magritte to stay rent-free in his London home, where Magritte studied architecture and painted. James is featured in two of Magritte’s works painted in 1937, Le Principe du Plaisir (The Pleasure Principle) and La Reproduction Interdite, a painting also known as Not to Be Reproduced.

During the German occupation of Belgium in World War II he remained in Brussels, which led to a break with Breton. He briefly adopted a colorful, painterly style in 1943–44, an interlude known as his “Renoir period”, as a reaction to his feelings of alienation and abandonment that came with living in German-occupied Belgium.

In 1946, renouncing the violence and pessimism of his earlier work, he joined several other Belgian artists in signing the manifesto Surrealism in Full Sunlight. During 1947–48, Magritte’s “Vache period,” he painted in a provocative and crude Fauve style. During this time, Magritte supported himself through the production of fake Picassos, Braques, and de Chiricos—a fraudulent repertoire he was later to expand into the printing of forged banknotes during the lean postwar period. This venture was undertaken alongside his brother Paul and fellow Surrealist and “surrogate son” Marcel Mariën, to whom had fallen the task of selling the forgeries. At the end of 1948, Magritte returned to the style and themes of his pre-war surrealistic art.

Politically, Magritte stood to the left, and retained close ties to the Communist Party, even in the post-war years. However, he was critical of the functionalist cultural policy of the Communist left, stating that “Class consciousness is as necessary as bread; but that does not mean that workers must be condemned to bread and water and that wanting chicken and champagne would be harmful. (…) For the Communist painter, the justification of artistic activity is to create pictures that can represent mental luxury.” While remaining committed to the political left, he thus advocated a certain autonomy of art. Spiritually, Magritte was an agnostic.

Popular interest in Magritte’s work rose considerably in the 1960s, and his imagery has influenced pop, minimalist, and conceptual art. In 2005 he was 9th in the Walloon version of De Grootste Belg (The Greatest Belgian); in the Flemish version he was 18th.

Magritte married Georgette Berger in June 1922. Georgette was the daughter of a butcher in Charleroi, and first met Magritte when she was 13 and he was 15. They met again 7 years later in Brussels in 1920 and Georgette, who had also studied art, became Magritte’s model, muse, and wife.

In 1936 Magritte’s marriage became troubled when he met a young performance artist, Sheila Legge, and began an affair with her. Magritte arranged for his friend, Paul Colinet, to entertain and distract Georgette, but this led to an affair between Georgette and Colinet. Magritte and his wife did not reconcile until 1940.

Magritte died of pancreatic cancer on 15 August 1967, aged 68, and was interred in Schaerbeek Cemetery, Evere, Brussels.