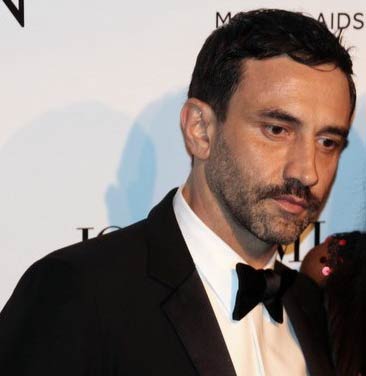 Riccardo Tisci (born 1974) is an Italian fashion designer. He studied in Italy at the Design Istituto d’Arte Applicata in Cantù until the age of 17, and then graduated from London’s Central Saint Martins Academy in 1999. In 2005, Tisci was given the title of creative director for Givenchy Women’s haute couture and ready-to-wear lines. In May 2008 he was additionally named as menswear and accessories designer of the Givenchy men’s division. In March 2018, it was announced he had been appointed chief creative officer of Burberry, succeeding Christopher Bailey.

Tisci’s apparent fascination with Gothic touches (dark, languid dresses for fall couture) and space-age minimalism (one ready-to-wear show featured white-clad models drifting around a sterile-white sphere) has drawn new attention to the Givenchy brand. Reviews and output so far have been mixed and inconsistent, but many, including influential fashion critics (such as Cathy Horyn of The New York Times and Suzy Menkes of the International Herald Tribune) have honed in on Tisci’s conceptual leanings, as well as his future potential for revitalizing the Givenchy brand and infusing it with his precision and imagination.

After graduating from London’s Central Saint Martins College of Art and Design in 1999, Tisci worked for companies such as Puma and Coccapani before signing a three-year contract with Ruffo Research, a company that has helped launch the careers of several fashion designers, such as Sophia Kokosalaki. Tisci has mentioned in an interview that he would like to work with an Iranian brand, although it is not known how realistic his wish is.

Upon the expiration of his contract in July 2004, Tisci spent time living in India, where he began to work on his own collection. In September 2004, during the Milan Fashion Week, Tisci debuted his first Riccardo Tisci Collection for Fall 2005/2006 in an off-calendar show. Tisci’s line generated considerable attention, and shortly thereafter, he was appointed by Givenchy to the position of creative director and made the following statement “I am delighted to join Givenchy and very proud to be able to bring my vision to this prestigious French haute couture house, whose history inspires me”.

Unlike the designers before him who succeeded Mr. Givenchy himself, Tisci has had particular success in haute couture, where he asserts “When I arrived we had five customers. Now we have 29”. Riccardo Tisci’s runway presentations are highly stylized in terms of architecture and space. Tisci says of this: “My way of showing is very melancholic… I love romanticism and sensuality”.

Tisci, under Givenchy, designed the costumes for Madonna’s Sticky & Sweet Tour in 2008, following Jean Paul Gaultier and Dolce & Gabbana. In 2009, for the encore of the tour he designed another costume for the tour’s opening song Candy Shop.

For the Givenchy Fall-Winter 2010 collection, he included a new model, Lea T, a transgender woman from Brazil, his longtime personal assistant.

In 2011, Tisci was widely considered to be John Galliano’s most likely successor as head designer of Christian Dior; however, in 2012 Raf Simons was announced as Galliano’s replacement as creative director.