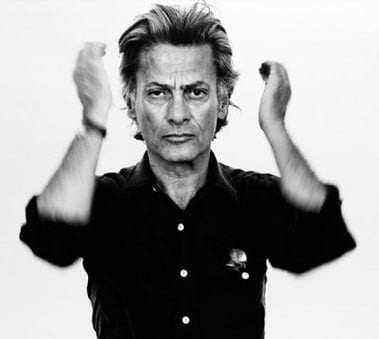 Richard Avedon (May 15, 1923 – October 1, 2004) was an American fashion and portrait photographer. He worked for Harper’s Bazaar and Vogue, specializing in capturing movement in still pictures of fashion, theater and dance. An obituary published in The New York Times said that “his fashion and portrait photographs helped define America’s image of style, beauty and culture for the last half-century”.

Avedon was born in New York City to a Jewish family. His father, Jacob Israel Avedon, was a Russian-born immigrant who advanced from menial work to starting his own successful retail dress business on Fifth Avenue called Avedon’s Fifth Avenue. His mother, Anna, from a family that owned a dress-manufacturing business, encouraged Richard’s love of fashion and art. Avedon’s interest in photography emerged when, at age 12, he joined a Young Men’s Hebrew Association (YMHA) Camera Club. He would use his family’s Kodak Box Brownie not only to feed his curiosity about the world but also to retreat from his personal life. His father was a critical and remote disciplinarian, who insisted that physical strength, education and money prepared one for life. The photographer’s first muse was his younger sister, Louise. During her teen years, she struggled through psychiatric treatment, eventually becoming increasingly withdrawn from reality and diagnosed with schizophrenia. These early influences of fashion and family would shape Avedon’s life and career, often expressed in his desire to capture tragic beauty in photos.

Avedon attended DeWitt Clinton High School in Bedford Park, Bronx, where from 1937 until 1940 he worked on the school paper, The Magpie, with James Baldwin.[6] As a teen, he also won a Scholastic Art and Writing Award. After graduating from DeWitt Clinton that year, he enrolled at Columbia University to study philosophy and poetry but dropped out after one year. He then started as a photographer for the Merchant Marines, taking ID shots of the crewmen with the Rolleiflex camera his father had given him. From 1944 to 1950, Avedon studied photography with Alexey Brodovitch at his Design Laboratory at The New School for Social Research.

In 1944, Avedon began working as an advertising photographer for a department store, but was quickly endorsed by Alexey Brodovitch, who was art director for the fashion magazine Harper’s Bazaar. Lillian Bassman also promoted Avedon’s career at Harper’s. In 1945, his photographs began appearing in Junior Bazaar and, a year later, in Harper’s Bazaar.

In 1946, Avedon had set up his own studio and began providing images for magazines including Vogue and Life[vague]. He soon became the chief photographer for Harper’s Bazaar. From 1950, he also contributed photographs to Life,[vague] Look and Graphis and in 1952 became Staff Editor and photographer for Theatre Arts Magazine. Avedon did not conform to the standard technique of taking studio fashion photographs, where models stood emotionless and seemingly indifferent to the camera. Instead, Avedon showed models full of emotion, smiling, laughing, and, many times, in action in outdoor settings, which was revolutionary at the time. However, towards the end of the 1950s, he became dissatisfied with daylight photography and open air locations and so turned to studio photography, using strobe lighting.

When Diana Vreeland left Harper’s Bazaar for Vogue in 1962, Avedon joined her as a staff photographer.[9] He proceeded to become the lead photographer at Vogue and photographed most of the covers from 1973 until Anna Wintour became editor in chief in late 1988. Notable among his fashion advertisement series are the recurring assignments for Gianni Versace, beginning with the spring/summer campaign 1980. He also photographed the Calvin Klein Jeans campaign featuring a fifteen-year-old Brooke Shields, as well as directing her in the accompanying television commercials. Avedon first worked with Shields in 1974 for a Colgate toothpaste ad. He shot her for Versace, 12 American Vogue covers and Revlon’s Most Unforgettable Women campaign. In the February 9, 1981, issue of Newsweek, Avedon said that “Brooke is a lightning rod. She focuses the inarticulate rage people feel about the decline in contemporary morality and destruction of innocence in the world.” On working with Avedon, Shields told Interview magazine in May 1992, “When Dick walks into the room, a lot of people are intimidated. But when he works, he’s so acutely creative, so sensitive. And he doesn’t like it if anyone else is around or speaking. There is a mutual vulnerability, and a moment of fusion when he clicks the shutter. You either get it or you don’t”.

In addition to his continuing fashion work, by the 1960s Avedon was making studio portraits of civil rights workers, politicians and cultural dissidents of various stripes in an America fissured by discord and violence. He branched out into photographing patients of mental hospitals, the Civil Rights Movement in 1963, protesters of the Vietnam War, and later the fall of the Berlin Wall.

A personal book called “Nothing Personal,” with a text by his high school classmate James Baldwin, appeared in 1964. During this period, Avedon also created two well known sets of portraits of The Beatles. The first, taken in mid to late 1967, became one of the first major rock poster series, and consisted of five psychedelic portraits of the group — four heavily solarized individual color portraits, and a black-and-white group portrait taken with a Rolleiflex camera and a normal Planar lens. The next year, he photographed the much more restrained portraits that were included with The Beatles LP in 1968. Among the many other rock bands photographed by Avedon, in 1973, he shot Electric Light Orchestra with all the members exposing their bellybuttons for recording On the Third Day.

Avedon was always interested in how portraiture captures the personality and soul of its subject. As his reputation as a photographer became widely known, he photographed many noted people in his studio with a large-format 8×10 view camera. His subjects include Buster Keaton, Marian Anderson, Marilyn Monroe, Ezra Pound, Isak Dinesen, Dwight D. Eisenhower, Andy Warhol, and the Chicago Seven. His portraits are distinguished by their minimalist style, where the person is looking squarely at the camera, posed in front of a sheer white background. By eliminating the use of soft lights and props, Avedon was able to focus on the inner worlds of his subjects evoking emotions and reactions. He would at times evoke reactions from his portrait subjects by guiding them into uncomfortable areas of discussion or asking them psychologically probing questions. Through these means he would produce images revealing aspects of his subject’s character and personality that were not typically captured by others.

Avedon’s mural groupings featured emblematic figures: Andy Warhol with the players and stars of The Factory; The Chicago Seven, political radicals charged with conspiracy to incite riot at the 1968 Democratic National Convention; the Beat poet Allen Ginsberg and his extended family; and the Mission Council, a group of military and government officials who governed the United States’ participation in the Vietnam War.

Avedon became the first staff photographer for The New Yorker in 1992, where his post-apocalyptic, wild fashion fable “In Memory of the Late Mr. and Mrs. Comfort,” featuring model Nadja Auermann and a skeleton, was published in 1995. Other pictures for the magazine, ranging from the first publication, in 1994, of previously unpublished photos of Marilyn Monroe to a resonant rendering of Christopher Reeve in his wheelchair and nude photographs of Charlize Theron in 2004, were topics of wide discussion. Some of his less controversial New Yorker portraits include those of Saul Bellow, Hillary Clinton, Toni Morrison, Derek Walcott, John Kerry, and Stephen Sondheim. In his later years, he continued to contribute to Egoïste, where his photographs appeared from 1984 through 2000. In 1999, Avedon shot the cover photos for Japanese-American singer Hikaru Utada’s Addicted to You.

Avedon had numerous museum exhibitions around the world. His first major retrospective was at the Minneapolis Institute of Arts in 1970. The Metropolitan Museum of Art, New York, presented two solo exhibitions during his lifetime, in 1978 and 2002. In 1980 another retrospective was organized by the University Art Museum in Berkeley. Major retrospectives were mounted at the Whitney Museum of American Art, New York (1994), and at the Louisiana Museum of Modern Art, Humlebaek, Denmark (2007; which traveled to Milan, Paris, Berlin, Amsterdam and San Francisco, through 2009). Showing Avedon’s work from his earliest, sun-splashed pictures in 1944 to portraits in 2000 that convey his fashion fatigue, the International Center of Photography in 2009 mounted the largest survey of his fashion work. Also in 2009, the Corcoran Gallery of Art showed Richard Avedon: Portraits of Power, bringing together his political portraits for the first time.