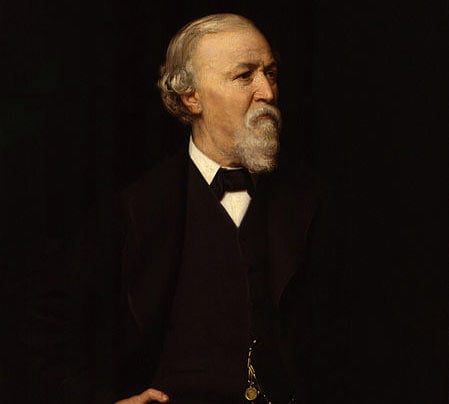 Robert Browning (7 May 1812 – 12 December 1889) was an English poet and playwright whose mastery of the dramatic monologue made him one of the foremost Victorian poets. His poems are known for their irony, characterization, dark humour, social commentary, historical settings, and challenging vocabulary and syntax.

Browning’s early career began promisingly, but collapsed. The long poems Pauline (1833) and Paracelsus (1835) received some acclaim, but in 1840 the difficult Sordello, which was seen as wilfully obscure, brought his poetry into disrepute. His reputation took more than a decade to recover, during which time he moved away from the Shelleyan forms of his early period and developed a more personal style.

In 1846 Browning married the older poet Elizabeth Barrett and went to live in Italy. By the time of her death in 1861 he had published the crucial collection Men and Women (1855). The collection Dramatis Personae (1864) and the book-length epic poem The Ring and the Book (1868-1869) followed, and made him a leading British poet. He continued to write prolifically, but his reputation today rests largely on the poetry he wrote in this middle period.

When Browning died in 1889, he was regarded as a sage and philosopher-poet who through his writing had made contributions to Victorian social and political discourse. Unusually for a poet, societies for the study of his work formed while he was still alive. Such Browning Societies remained common in Britain and the United States until the early 20th century.

Robert Browning was born in Walworth in the parish of Camberwell, Surrey, which now forms part of the Borough of Southwark in south London. He was baptized on 14 June 1812, at Lock’s Fields Independent Chapel, York Street, Walworth, the only son of Sarah Anna (née Wiedemann) and Robert Browning. His father was a well-paid clerk for the Bank of England, earning about £150 per year. Browning’s paternal grandfather was a slave owner in Saint Kitts, West Indies, but Browning’s father was an abolitionist. Browning’s father had been sent to the West Indies to work on a sugar plantation, but, due to a slave revolt there, had returned to England. Browning’s mother was the daughter of a German shipowner who had settled in Dundee in Scotland, and his Scottish wife. Browning had one sister, Sarianna. Browning’s paternal grandmother, Margaret Tittle, who had inherited a plantation in St Kitts, was rumoured (within the family) to have a mixed race ancestry, including some Jamaican blood, but author Julia Markus suggests she was Kittitian rather than Jamaican. The evidence, however, is inconclusive. Robert’s father, a literary collector, amassed a library of around 6,000 books, many of them rare. As such, Robert was raised in a household of significant literary resources. His mother, to whom he was very close, was a devout nonconformist and a talented musician. His younger sister, Sarianna, also gifted, became her brother’s companion in his later years, after the death of his wife in 1861. His father encouraged his children’s interest in literature and the arts.

By 12, Browning had written a book of poetry which he later destroyed when no publisher could be found. After being at one or two private schools, and showing an insuperable dislike of school life, he was educated at home by a tutor via the resources of his father’s extensive library. By 14 he was fluent in French, Greek, Italian and Latin. He became a great admirer of the Romantic poets, especially Shelley. Following the precedent of Shelley, Browning became an atheist and vegetarian. At 16, he studied Greek at University College London but left after his first year. His parents’ staunch evangelical faith prevented his studying at either Oxford or Cambridge University, both then open only to members of the Church of England. He had inherited substantial musical ability through his mother, and composed arrangements of various songs. He refused a formal career and ignored his parents’ remonstrations, dedicating himself to poetry. He stayed at home until the age of 34, financially dependent on his family until his marriage. His father sponsored the publication of his son’s poems.

This section lists the plays and volumes of poetry Browning published in his lifetime. Some individually notable poems are also listed, under the volumes in which they were published. (His only notable prose work, with the exception of his letters, is his Essay on Shelley.)