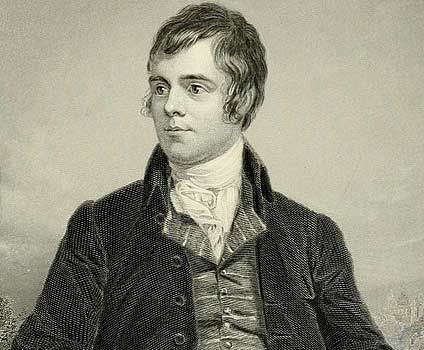 Robert Burns (25 January 1759 – 21 July 1796), also known familiarly as Rabbie Burns, the National Bard, Bard of Ayrshire and the Ploughman Poet and various other names and epithets, was a Scottish poet and lyricist. He is widely regarded as the national poet of Scotland and is celebrated worldwide. He is the best known of the poets who have written in the Scots language, although much of his writing is in English and a light Scots dialect, accessible to an audience beyond Scotland. He also wrote in standard English, and in these writings his political or civil commentary is often at its bluntest.

He is regarded as a pioneer of the Romantic movement, and after his death he became a great source of inspiration to the founders of both liberalism and socialism, and a cultural icon in Scotland and among the Scottish diaspora around the world. Celebration of his life and work became almost a national charismatic cult during the 19th and 20th centuries, and his influence has long been strong on Scottish literature. In 2009 he was chosen as the greatest Scot by the Scottish public in a vote run by Scottish television channel STV.

As well as making original compositions, Burns also collected folk songs from across Scotland, often revising or adapting them. His poem (and song) “Auld Lang Syne” is often sung at Hogmanay (the last day of the year), and “Scots Wha Hae” served for a long time as an unofficial national anthem of the country. Other poems and songs of Burns that remain well known across the world today include “A Red, Red Rose”, “A Man’s a Man for A’ That”, “To a Louse”, “To a Mouse”, “The Battle of Sherramuir”, “Tam o’ Shanter” and “Ae Fond Kiss”.

Burns’s style is marked by spontaneity, directness, and sincerity, and ranges from the tender intensity of some of his lyrics through the humour of “Tam o’ Shanter” and the satire of “Holy Willie’s Prayer” and “The Holy Fair”.

Burns’s poetry drew upon a substantial familiarity with and knowledge of Classical, Biblical, and English literature, as well as the Scottish Makar tradition.Burns was skilled in writing not only in the Scots language but also in the Scottish English dialect of the English language. Some of his works, such as “Love and Liberty” (also known as “The Jolly Beggars”), are written in both Scots and English for various effects.

His themes included republicanism (he lived during the French Revolutionary period) and Radicalism, which he expressed covertly in “Scots Wha Hae”, Scottish patriotism, anticlericalism, class inequalities, gender roles, commentary on the Scottish Kirk of his time, Scottish cultural identity, poverty, sexuality, and the beneficial aspects of popular socialising (carousing, Scotch whisky, folk songs, and so forth).

The strong emotional highs and lows associated with many of Burns’s poems have led some, such as Burns biographer Robert Crawford,[38] to suggest that he suffered from manic depression—a hypothesis that has been supported by analysis of various samples of his handwriting. Burns himself referred to suffering from episodes of what he called “blue devilism”. The National Trust for Scotland has downplayed the suggestion on the grounds that evidence is insufficient to support the claim.

Burns’s worldly prospects were perhaps better than they had ever been; but he had become soured, and had alienated many of his friends by freely expressing sympathy with the French and American Revolutions and the advocates of reform and votes for all men. His political views came to the notice of his employers and in an attempt to prove his loyalty to the Crown, Burns joined the Royal Dumfries Volunteers in March 1795. He lived here in Dumfries in a two-storey red sandstone house on Mill Hole Brae, now Burns street which is now a museum. He went on long journeys on horseback, often in harsh weather conditions as an Excise Supervisor. He was kept very busy – as the exciseman, doing reports, father of four young children, song collector and songwriter. As his health began to give way, he began to age prematurely and fell into fits of despondency. The habits of intemperance (alleged mainly by temperance activist James Currie) are said to have aggravated his long-standing possible rheumatic heart condition.

On the morning of 21 July 1796, Burns died in Dumfries, at the age of 37. The funeral took place on Monday 25 July 1796, the day that his son Maxwell was born. He was at first buried in the far corner of St. Michael’s Churchyard in Dumfries; a simple “slab of freestone” was erected as his gravestone by Jean Armour, which some felt insulting to his memory. His body was eventually moved to its final location in the same cemetery, the Burns Mausoleum, in September 1817. The body of his widow Jean Armour was buried with his in 1834.

Armour had taken steps to secure his personal property, partly by liquidating two promissory notes amounting to fifteen pounds sterling (about 1,100 pounds at 2009 prices). The family went to the Court of Session in 1798 with a plan to support his surviving children by publishing a four-volume edition of his complete works and a biography written by Dr. James Currie. Subscriptions were raised to meet the initial cost of publication, which was in the hands of Thomas Cadell and William Davies in London and William Creech, bookseller in Edinburgh. Hogg records that fund-raising for Burns’s family was embarrassingly slow, and it took several years to accumulate significant funds through the efforts of John Syme and Alexander Cunningham.

Through his twelve children, Burns has over 900 living descendants as of 2019.