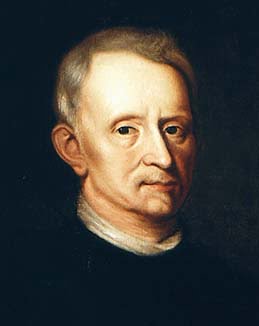 Robert Hooke FRS (28 July [O.S. 18 July] 1635 – 3 March 1703) was an English scientist and architect, a polymath, recently called “England’s Leonardo”, who, using a microscope, was the first to visualize a microorganism. An impoverished scientific inquirer in young adulthood, he found wealth and esteem by performing over half of the architectural surveys after London’s great fire of 1666. Hooke was also a member of the Royal Society and since 1662 was its curator of experiments. Hook was also Professor of Geometry at Gresham College.

As an assistant to physical scientist Robert Boyle, Hooke built the vacuum pumps used in Boyle’s experiments on gas law, and himself conducted experiments. In 1673, Hooke built the earliest Gregorian telescope, and then he observed the rotations of the planets Mars and Jupiter. Hooke’s 1665 book Micrographia spurred microscopic investigations. Thus observing microscopic fossils, Hooke endorsed biological evolution. Investigating in optics, specifically light refraction, he inferred a wave theory of light. And his is the first recorded hypothesis of heat expanding matter, air’s composition by small particles at larger distances, and heat as energy.

In physics, he approximated experimental confirmation that gravity heeds an inverse square law, and first hypothesised such a relation in planetary motion, too, a principle furthered and formalised by Isaac Newton in Newton’s law of universal gravitation. Priority over this insight contributed to the rivalry between Hooke and Newton, who thus antagonized Hooke’s legacy. In geology and paleontology, Hooke originated the theory of a terraqueous globe, disputed the literally Biblical view of the Earth’s age, hypothesised the extinction of organism species, and argued that fossils atop hills and mountains had become elevated by geological processes. Hooke’s pioneering work in land surveying and in mapmaking aided development of the first modern plan-form map, although his grid-system plan for London was rejected in favour of rebuilding along existing routes. Even so, Hooke was key in devising for London a set of planning controls that remain influential.

Robert Hooke was born in 1635 in Freshwater on the Isle of Wight to Cecily Gyles and John Hooke, a Church of England priest, the curate of Freshwater’s Church of All Saints. Father John Hooke’s two brothers, Robert’s paternal uncles, were also ministers. A royalist, John Hooke likely was among a group that went to pay respects to Charles I as he escaped to the Isle of Wight. Expected to join the church, Robert, too, would become a staunch monarchist. Robert was the youngest, by seven years, of four siblings, two boys and two girls. Their father led a local school as well, yet at least partly homeschooled Robert, frail in health. The young Robert Hooke was fascinated by observation, mechanical works, and drawing. He dismantled a brass clock and built a wooden replica that reportedly worked “well enough”. He made his own drawing materials from coal, chalk, and ruddle (iron ore).

On his father’s death in 1648, Robert inherited 40 pounds. He took this to London with the aim of beginning an apprenticeship, and studied briefly with Samuel Cowper and Peter Lely, but was persuaded instead to enter Westminster School by its headmaster Dr. Richard Busby. Hooke quickly mastered Latin and Greek, studied Hebrew some, mastered Euclid’s Elements, learned to play the organ,and began his lifelong study of mechanics.

Hooke may have been among a group of students that Busby taught in parallel to the school’s main courses. Contemporary accounts call him “not much seen” in school, apparently true of others positioned similarly. Busby, an ardent and outspoken royalist, was by all accounts[citation needed] trying to preserve the nascent spirit of scientific inquiry that had begun to flourish in the reign of Charles I but which was at odds with the literal Biblical teachings of the Protectorate. To Busby and his select students, the Anglican Church was a framework to support the spirit of inquiry into God’s work: those who were able to do so were destined by God to explore and study His creation.