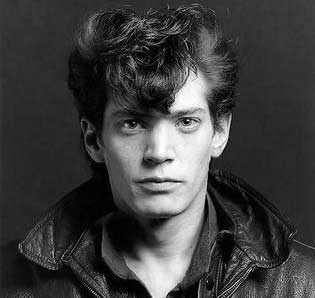 Mapplethorpe was born in Floral Park, Queens, New York City, the son of Joan Dorothy (Maxey) and Harry Irving Mapplethorpe, an electrical engineer. He was of English, Irish, and German descent, and grew up as a Catholic in Our Lady of the Snows Parish. He had three brothers and two sisters. One of his brothers, Edward, later worked for him as assistant and became a photographer as well. He studied for a Bachelor of Fine Arts from the Pratt Institute in Brooklyn, where he majored in Graphic Arts, though he dropped out in 1969 before finishing his degree. Mapplethorpe lived with his girlfriend Patti Smith from 1967 to 1972, and she supported him by working in bookstores. They created art together, and maintained a close friendship throughout Mapplethorpe’s life.

Mapplethorpe took his first photographs in the late 1960s or early 1970s using a Polaroid camera. In 1972, he met art curator Sam Wagstaff, who would become his mentor, lover, patron, and lifetime companion. In the mid-1970s, Wagstaff acquired a Hasselblad medium-format camera and Mapplethorpe began taking photographs of a wide circle of friends and acquaintances, including artists, composers, and socialites. During this time, he became friends with New Orleans artist George Dureau, whose work had such a profound impact on Mapplethorpe that he restaged many of Dureau’s early photographs. From 1977 until 1980, Mapplethorpe was the lover of writer and Drummer editor Jack Fritscher, who introduced him to the Mineshaft (a members-only BDSM gay leather bar and sex club in Manhattan). Mapplethorpe took many pictures of the Mineshaft and was at one point its official photographer (… “After dinner I go to the Mineshaft.”)

By the 1980s, Mapplethorpe’s subject matter focused on statuesque male and female nudes, delicate flower still lifes, and highly formal portraits of artists and celebrities. Mapplethorpe’s first studio was at 24 Bond Street in Manhattan. In the 1980s, Wagstaff bought a top-floor loft at 35 West 23rd Street for Robert, where he resided, also using it as a photo-shoot studio. He kept the Bond Street loft as his darkroom. In 1988, Mapplethorpe selected Patricia Morrisroe to write his biography, which was based on more than 300 interviews with celebrities, critics, lovers, and Mapplethorpe himself.

Mapplethorpe died on the morning of March 9, 1989 at the age of 42 due to complications from HIV/AIDS, in a Boston, Massachusetts hospital. His body was cremated. His ashes are interred at St. John’s Cemetery, Queens in New York City, at his mother’s grave-site, etched “Maxey”.