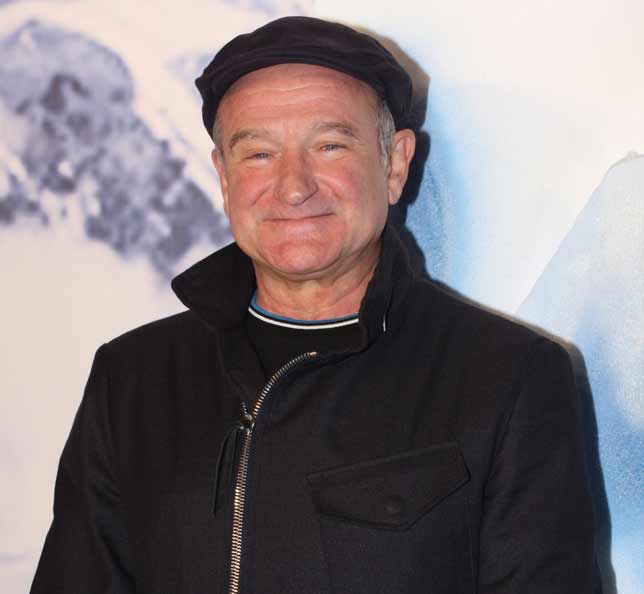 Robin McLaurin Williams (July 21, 1951 – August 11, 2014) was an American actor, voice actor, comedian and singer. He began performing stand-up comedy in San Francisco and Los Angeles during the mid-1970s, and rose to fame for playing the alien Mork in the sitcom Mork & Mindy (1978–1982). He was known for his improvisation skills and the wide variety of memorable voices he created. He is widely regarded by critics as one of the funniest comedians of all time.

In August 2014, at age 63, Williams committed suicide by hanging at his home in Paradise Cay, California. His widow, Susan Schneider Williams, attributed his suicide to his struggle with Lewy body disease, as did the autopsy, and medical experts.

Robin McLaurin Williams was born at St. Luke’s Hospital in Chicago, Illinois, on July 21, 1951. His father, Robert Fitzgerald Williams, was a senior executive in Ford’s Lincoln-Mercury Division. His mother, Laurie McLaurin, was a former model from Jackson, Mississippi, whose great-grandfather was Mississippi senator and governor Anselm J. McLaurin. Williams had two elder half-brothers: paternal half-brother Robert (also known as Todd) and maternal half-brother McLaurin. He had English, French, German, Irish, Scottish, and Welsh ancestry. While his mother was a practitioner of Christian Science, Williams was raised in his father’s Episcopal faith. During a television interview on Inside the Actors Studio in 2001, Williams credited his mother as an important early influence on his humor, and he tried to make her laugh to gain attention.

Williams attended public elementary school in Lake Forest at Gorton Elementary School and middle school at Deer Path Junior High School. He described himself as a quiet child who did not overcome his shyness until he became involved with his high school drama department. His friends recall him as very funny. In late 1963, when Williams was 12, his father was transferred to Detroit. The family lived in a 40-room farmhouse on 20 acres in suburban Bloomfield Hills, Michigan, where he was a student at the private Detroit Country Day School. He excelled in school, where he was on the school’s wrestling team and was elected class president.

As both his parents worked, Williams was partially raised by the family’s maid, who was his main companion. When he was 16, his father took early retirement and the family moved to Tiburon, California. Following their move, Williams attended Redwood High School in nearby Larkspur. At the time of his graduation in 1969, he was voted “Most Likely Not to Succeed” and “Funniest” by his classmates. After high school graduation, Williams enrolled at Claremont Men’s College in Claremont, California, to study political science; he dropped out to pursue acting. Williams studied theatre for three years at the College of Marin, a community college in Kentfield, California. According to College of Marin’s drama professor James Dunn, the depth of the young actor’s talent became evident when he was cast in the musical Oliver! as Fagin. Williams often improvised during his time in the drama program, leaving cast members in hysterics. Dunn called his wife after one late rehearsal to tell her that Williams “was going to be something special”.

In 1973, Williams attained a full scholarship to the Juilliard School (Group 6, 1973–1976) in New York City. He was one of 20 students accepted into the freshman class, and he and Christopher Reeve were the only two accepted by John Houseman into the Advanced Program at the school that year. William Hurt and Mandy Patinkin were also classmates. According to biographer Jean Dorsinville, Franklyn Seales and Williams were roommates at Juilliard. Reeve remembered his first impression of Williams when they were new students at Juilliard: “He wore tie-dyed shirts with tracksuit bottoms and talked a mile a minute. I’d never seen so much energy contained in one person. He was like an untied balloon that had been inflated and immediately released. I watched in awe as he virtually caromed off the walls of the classrooms and hallways. To say that he was ‘on’ would be a major understatement.”

Williams and Reeve had a class in dialects taught by Edith Skinner, who Reeve said was one of the world’s leading voice and speech teachers; according to Reeve, Skinner was bewildered by Williams and his ability to instantly perform in many different accents. Their primary acting teacher was Michael Kahn, who was “equally baffled by this human dynamo”. Williams already had a reputation for being funny, but Kahn criticized his antics as simple stand-up comedy. In a later production, Williams silenced his critics with his well-received performance as an old man in Tennessee Williams’ Night of the Iguana. Reeve wrote, “He simply was the old man. I was astonished by his work and very grateful that fate had thrown us together.” The two remained close friends until Reeve’s death in 2004. Reeve had famously struggled for years with being quadriplegic after a horse-riding accident.:16 Their friendship was like “brothers from another mother”, according to Williams’ son Zak. Williams paid many of Reeve’s medical bills and gave financial support to his family.

During the summers of 1974, 1975, and 1976, Williams worked as a busboy at The Trident in Sausalito, California. He left Juilliard during his junior year in 1976 at the suggestion of Houseman, who said there was nothing more Juilliard could teach him. Gerald Freedman, another of his teachers at Juilliard, said that Williams was a “genius” and that the school’s conservative and classical style of training did not suit him; no one was surprised that he left.