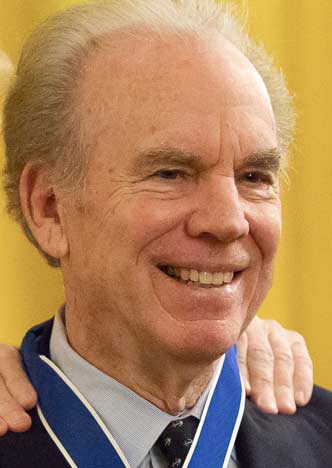 Roger Thomas Staubach (born February 5, 1942), nicknamed “Roger the Dodger”, “Captain America” and “Captain Comeback”, is an American former professional football player who was a quarterback for the Dallas Cowboys in the National Football League (NFL).

He attended the U.S. Naval Academy where he won the 1963 Heisman Trophy, and after graduation he served in the U.S. Navy, including a tour of duty in Vietnam. Staubach joined Dallas in 1969 and played with the club during all 11 seasons of his career. He led the team to the Super Bowl five times, four as the starting quarterback. He led the Cowboys to victories in Super Bowl VI and Super Bowl XII. Staubach was named Most Valuable Player of Super Bowl VI, becoming the first of four players to win both the Heisman Trophy, and Super Bowl MVP, along with Jim Plunkett, Marcus Allen, and Desmond Howard. He was named to the Pro Bowl six times during his 11-year NFL career. He is currently executive chairman of Jones Lang LaSalle.

Staubach was born in Cincinnati, Ohio, the only child of Elizabeth, (née Smyth) and Robert Staubach. He is of partial German descent, and grew up in Silverton, a northeastern suburb of Cincinnati. He was a Boy Scout as a youth, attended St. John the Evangelist Catholic School, and graduated from the Catholic high school Purcell High School in Cincinnati (now named Purcell Marian High School) in 1960.

Staubach was a tenth-round “future” selection in the 1964 NFL Draft by the Cowboys. The NFL allowed the Cowboys to draft him one year before his college eligibility was over (because he was four years out of high school), although due to his four-year military commitment, he would not play professionally until 1969 as a 27-year-old rookie. He was also drafted by the Kansas City Chiefs in the 16th round (122nd choice overall) of the 1964 American Football League Draft, also with a future selection.

While still in the Navy during 1968, he went to the Cowboys’ rookie camp, using most of his annual military leave. During 1969, Staubach resigned his naval commission just in time to join the Cowboys training camp. The Cowboys won the first NFC title in 1970 with Craig Morton starting at quarterback, but lost to the Baltimore Colts in Super Bowl V, losing by three points on a last-second field goal.

In 1971, Morton began the season as the starter, but after a loss to the New Orleans Saints, Staubach assumed the role. However, in a game against the Chicago Bears during the seventh week of that season, coach Tom Landry alternated Staubach and Morton on each play, sending in the quarterbacks with the play call from the sideline. Dallas gained almost 500 yards of offense but committed seven turnovers that resulted in a 23–19 loss to a mediocre Bears squad that dropped the Cowboys to 4–3 for the season, two games behind the Washington Redskins in the NFC East race.

Staubach assumed the full-time quarterbacking duties in a week-eight victory over the St. Louis Cardinals and led the Cowboys to 10 consecutive victories, including their first Super Bowl victory, 24–3 over the Miami Dolphins in Super Bowl VI in January 1972. He was named the game’s MVP, completing 12 out of 19 passes for 119 yards and two touchdowns and rushing for 18 yards. After the season, he negotiated his own contract, a three-year deal at about $75,000 per year.

In 1972, Staubach missed most of the season with a separated shoulder, but he relieved Morton in a divisional playoff against the San Francisco 49ers and threw two touchdown passes in the last 90 seconds to win 30–28. With that performance, he won back his regular job and did not relinquish it again during his career.

Staubach’s offensive teammates included standout receivers “Bullet” Bob Hayes, Lance Alworth, Drew Pearson and Golden Richards, tight ends Mike Ditka, Billy Joe Dupree and Jackie Smith, tackle Rayfield Wright and running backs Robert Newhouse, Calvin Hill and Tony Dorsett. Dorsett, Hayes and Wright are in the Hall of Fame, as are Alworth, Ditka and Smith (although those three were all with the Cowboys only at the end of their careers).

In his final NFL season of 1979, Staubach scored career highs in completions (267), passing yards (3,586) and touchdown passes (27), with just 11 interceptions. He retired at the conclusion of the season in order to protect his long-term health, declining the Cowboys’ offer for two more seasons. He suffered 20 concussions in his playing career, including six in which he said he was “knocked out”. After suffering two concussions in 1979, a doctor at Cornell told Staubach that while his brain tests were fine at the moment, another concussion could have life-altering consequences. He chose to retire and was succeeded as the Cowboys starting quarterback by Danny White.

Real estate
In 1977, he started a commercial real estate business, The Staubach Company, in partnership with Robert Holloway Jr., an associate of Henry S. Miller. He had prepared by working in the off-seasons from 1970 until 1977 for the Henry S. Miller Company. Staubach began working with real estate because “I couldn’t have retired at my age and just played golf. First of all, they didn’t pay quarterbacks what they do today. And I was 37 with three kids. I kept thinking about [what would happen] if some linebacker takes off my head and I can’t play anymore.” He said “Henry Miller Jr. was a lot like [legendary Cowboys coach Tom] Landry. They both had similar haircuts … they both had phenomenal integrity, great work ethic, and they could transfer their strengths to other people.”

The Staubach Company has been his primary endeavor since retirement from football. The company first developed several office buildings; Holloway managed construction while Staubach found tenants. In 1982, Staubach bought out Holloway and shifted the company’s emphasis from commercial development to representing corporate clients seeking to lease or buy space. This proved fortuitous as a boom in Dallas office construction followed by a recession in the Texas oil industry left the city with excess office space, so companies representing tenants wielded greater influence. The company has worked with major businesses including AT&T, McDonald’s Corporation, Hospital Corporation of America and K Mart Corporation. The company was also involved with residential development, with ownership stakes in 27 apartments and other real estate projects in the Dallas-Fort Worth area. Some of these were in partnership with Cowboys teammate Bob Breunig through S.B.C. Development Corporation, then a subsidiary of the Staubach Company. Others were collaborations with local developers and investors, including Ross Perot. He served as its chairman and CEO until June 20, 2007, when he announced he would resign as CEO of the multibillion-dollar real estate company he started 30 years earlier.

On December 27, 2011, Staubach wrote the foreword for a book titled The Power in a Link, published by John Wiley & Sons, authored by United States Military Academy graduate, David Gowel.

During the early 1980s, Staubach worked for a brief time as a color commentator for CBS Sports’ NFL telecasts. On November 9, 1980, during a close game between the New York Giants and the Dallas Cowboys, Staubach broadcast a nostalgic comment by exclaiming he would like to be “right down there in the middle of it”. The Cowboys lost 38–35.

In 2009, Staubach was honored with the “Lombardi Award of Excellence” from the Vince Lombardi Cancer Foundation. The award was created to honor coach Lombardi’s legacy, and is awarded annually to an individual who exemplifies the “spirit” of the coach.

Politics
On September 25, 2007, a fundraising email was sent out from the presidential campaign of Senator John McCain (R-AZ) with a letter from Staubach asking recipients to make a contribution before the Federal Election Commission third-quarter reporting date of September 30, 2007.

Staubach is a conservative Republican who has often been mentioned as a possible candidate for political office and had once been asked to campaign for U.S. Senator. He received a single vote for Vice Presidential nomination at the 1976 Republican National Convention. In 2013, Staubach’s daughter, Jennifer Staubach Gates, won a city council seat, representing Dallas, Texas 13th District.